Bitcoin is the sewer rat of currencies

Since we’re stepping carefully around Godwin, let me add that the experience of persecuted minorities under the Third Reich is a powerful argument in favor of something like the gold standard.

Being able to secure readily exchangeable money completely beyond the control or knowledge of the government made the difference between life and death for some. That need has not gone away, and probably never will.

At the time, it was gold coins such as British “Sovereigns.” Nowadays, it just might be BitCoin – although I think 500 Euro notes, also known as “Bin Ladins”, are currently preferred).

Given the severity of the 1906 and 1929 crashes relative to, say, what happened in 1973 or 2008, I’d say fractional reserve banking looks pretty good in comparison.

The gold standard was abandoned by the US in 1933. The Great Depression continued for at least another 8 years after that (longer if you count WWII perhaps). The standard may have been involved in those crashes, but it would be a very bold claim to pin it near a strong causality. The same is true of 1873.

Anyone who can see those deflationary periods in green in the graph below and think this is desirable to return to is at best stupid:

I can’t tell if you were agreeing with me or not but in fact AML & KYC are not about reigning in excesses, they are about telling dirty money from clean.

The causes of the Great Depression are of course still debated. Most of the usual arguments involve the gold standard as culprit, because of the implied constraints on monetary policy.

I would note that even after leaving the gold standard in 1933, the US still kept tight constraints on monetary policy. The Clearest example was the “Roosevelt Recession” of 1937:

From the fall of 1937 to the summer of 1938, industrial production declined by 33 percent; wages by 35 percent; national income by 13 percent; and not surprisingly, the unemployment rate rose by roughly 5 percentage points, with an estimated 4 million workers losing their jobs.

Keynesians say the cause was the drastic cuts from imposing a balanced budget, while Monetarists like Friedman argue it was the tight money policy of 1936-1937. Whichever argument is more correct, the germane point for our discussion is that both policies would have been implicit under a gold standard. That is the central bankers of the world might have made one or these mistakes, but gold standard would have forced both of these mistakes.

I do not understand your point about 1873. Yes, the immediate proximal cause was a financial panic in Vienna and over-investment in US railroads. But nemomen’s and my point is that the monetary straightjacket makes it very difficult to recover from these mistakes. I think his graph sums this up nicely.

Perhaps you can help me understand something about the benefits of a gold standard.

Given that gold-ish hard money brought the deflation the Nazis needed to wedge their way into the coalition, you are clutching at straws. Under hard money, the Jews got poor and dead.

I’m sure the bitcoin-isn’t-brown folks have read this and have replies to it: http://motherboard.vice.com/read/bitcoin-is-unsustainable. Given that mining would be a money-loser to me in terms of my electrical bill, I’m inclined to believe the carbon footprint is poor. And, indeed, if botnets aren’t already mining bitcoin as a way to duck power costs, they will soon. (This is why I don’t want my appliances on the internet.)

I just went to an event today where the former Greek finance minister Yanis Varoufakis spoke and one of the issues was out of control international debt - which was compared to betting slips. One of the other speakers talked about the need for governments to try to get banks under control and one of the problems with that is flight of capital. Concurrent measures will be needed to limit the mobility of capital. But somehow, a currency that is hyper-mobile is actually the answer. It’s deflationary but it’s going to magically lead to the prosperity of the bottom billion, by, um, giving them no control whatsoever of global finance, doing nothing to address the debt crisis and boiling the ocean to ‘mine’ new coins. Awesome.

Bitcoin is anti-democratic. there’s a reason that right wing promoters of corporate feudal libertarian paradises love this shit. (Maybe their extreme irritatingness will save us.)

Much further upthread I had already noted that the gold standard was part of the toxic stew that enabled the political rise of Nazis, so for the point you raise, I have already agreed with you. But thanks for being more specific.

Under hard money, the Jews got poor and dead.

Mostly, yes, but not all of them. My in-laws exist. Gold coins are part of their story ( as is world-class legal maneuvering and some serious heroism by non-Jewish Germans. It’s a helluva story).

And, indeed, if botnets aren’t already mining bitcoin as a way to duck power costs, they will soon.

Years ago. Probably not so much anymore. 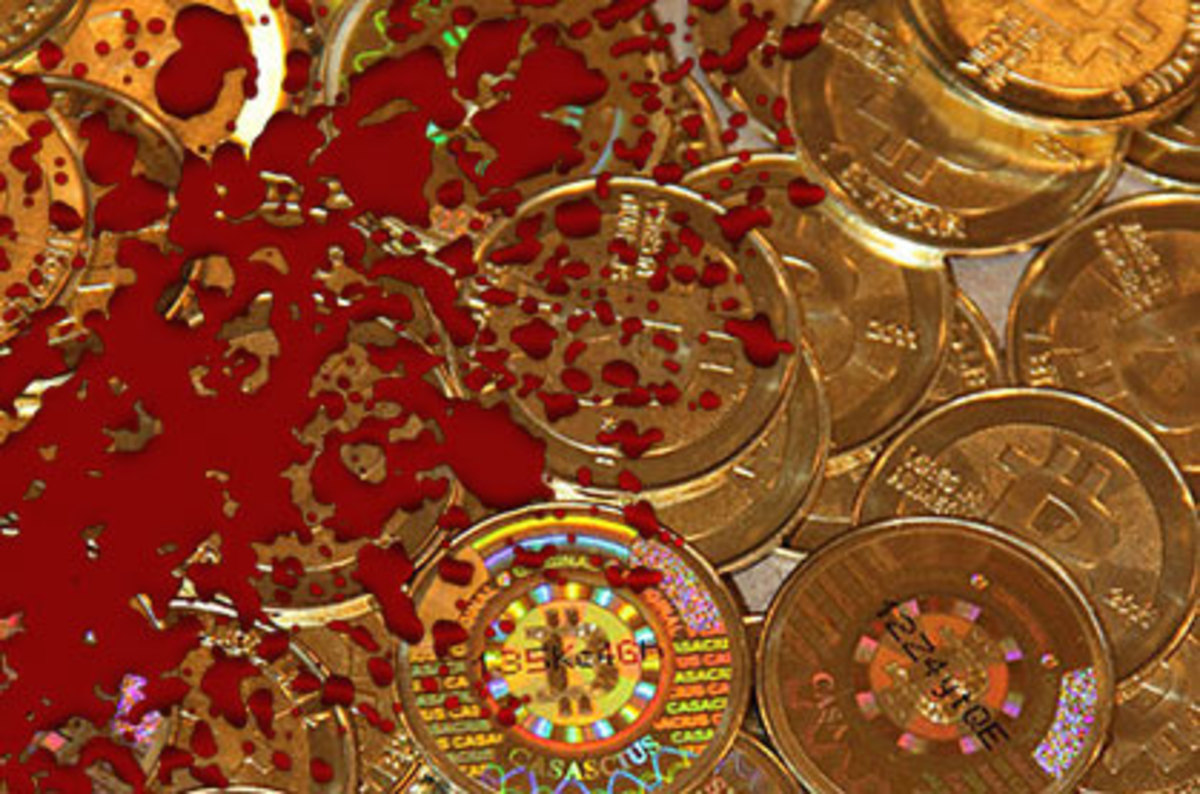 Got a botnet? Thinking of using it to mine Bitcoin? Don't bother

It’s good that some of your family made it, but you can see the problem of generalizing bribery as a survival strategy, right? It doesn’t generalize, is the point, and would have been less bulky with diamonds.

Every point you make is so dissonant with my knowledge that I am curious what you are basing your claims on. I would love for you to share your experiences and knowledge.

Starting with the easiest point: diamonds are a terrible medium of exchange. They are hard to value, hard to sub-divide, suffer horrific transaction cost when being converted to local currency, and most people don’t even want them. If someone unknown to you, but vetted by a trusted friend, turned up at your house and said, “I need to borrow your car for a few days – here is a diamond for your trouble” would you have any idea what to do with that small bit of carbon? How about if they handed you five one-hundred-euro notes? See the difference?

Second, there are many situations that call for an anonymous transaction that aren’t bribery. Say you need to get somewhere and have reason to believe that the government is monitoring the local train station. So your friend takes you to a neighboring town and buys you your ticket. Your friend is taking a personal risk for you – the least you could do is pay for your own ticket. Of course, you don’t want to pay your friend in a way that can be traced back to you – the government is looking for you. Are you calling that a bribe?

And what’s so wrong with bribery? You do understand that bribery, even moreso than gender, is socially constructed? What we proud Westerners call bribery is in other cultures how normal business is conducted. Think of all the red envelopes that move around during a Chinese New Year’s celebration. Likewise, some of things we Westerners do as a matter of conducting normal business, like hiring consultants, looks _dishonest_in other cultures. “Why did you send hired help to negotiate with me? He isn’t even a family member. Why are you ashamed to show your own face and eat my food?”

Lastly, I completely reject that paying bribes is an inherently flawed survival strategy. Yes, try to avoid paying bribes whenever possible. Paying a bribe is always a shitty option that often creates more problems than it solves. If you can figure out better way – do so. But sometimes, a bribe is the least shitty option available.

Rather than relate a personal story, I would encourage you to read " Behind the Beautiful Forevers. The members of that under privileged community struggle to NOT get sucked into the bribery culture that is Indian civic governance. But their paucity of social power sometimes leaves them with only worse options. Could you honestly tell these decent people “Bribery isn’t a generalizable survival strategy”? What alternative would you give them solve their immediate problems? (eg the most economically productive member of the family has just been arbitrarily imprisoned)

I appreciate your sentiment – I look forward to you view points.

AML & KYC […] are about telling dirty money from clean

Another way of saying this is that they are about surveillance. And while surveillance can in theory be used for any number of purposes, including stopping corruption and “kleptocratic behavior”, in practice the state* mostly uses it for exerting control over threats to its power.

Therefore those regulations probably don’t contribute to a more egalitarian society overall, and it’s good to abolish them through technical means like bitcoin. As for whether bitcoin overall will make society more egalitarian, the jury’s still out on that one. I guess we’ll find out!

I’m gong to venture to guess you’ve never actually worked anywhere or had any practical experience with these sorts of regulations? Indeed states require financial corporations to enforce these regulations or dare we say control parts of the populace, but real time reporting to the state is not actually required anywhere thus the word surveillance is entirely wrong.

As for egalitarian society, if you figure that the yakuza or hezbullah or kleptocrats who wish to avoid paying taxes deserve an equal shake then you’d be right. Otherwise not.

You dont seem to understand the function or purpose here.

What about said Wikileaks? Or somebody who wants to buy meds that work for him but aren’t registered or permitted in the area he lives in?

Or somebody who wants to buy meds that work for him but aren’t registered or permitted in the area he lives in?

Aren’t you the guy that tells me, over and over again, that “people are stupid?” Why should we trust them to choose illegal meds for themselves? Maybe they aren’t legal for a reason (like they might kill you), not just because you hate the FDA or other regulatory bodies.

Aren’t you the guy that tells me, over and over again, that “people are stupid?”

Why should we trust them to choose illegal meds for themselves?

Because some of them aren’t stupid, and for the rest there’s Darwin.

And sometimes the risk of the meds you take is smaller than the risk of e.g. walking distracted under a bus they help you to reduce. You should be able to choose your tradeoffs and your risks.

Maybe they aren’t legal for a reason (like they might kill you), not just because you hate the FDA or other regulatory bodies.

FDA & co. are somewhat good as default setting. But I want to have the advanced options available too, the opt-outs and the overrides. Including the risk that it will kill me - which can be substantially lower than other risks of daily activities that we long ago stopped even noticing.

Many of the regulations cater to the stupid and protect them from themselves. Which is all good - as long as you have the key from your padded cell.

Because some of them aren’t stupid, and for the rest there’s Darwin.

While I won’t try to persuade you that this is not a good core belief to hold, you might want to think about the values behind this belief and their broader implications.