I think this needs another 30 minute video explaining what is going on. Seeing characters turn into spinning fans is pretty funny though.

That was my favourite part!

I really like the youtube series “Let’s Glitch Super Mario World”. They can be a bit tedious to watch at times since he rarely edits out mistakes, but if you’ve got a lot of time to kill, they’re fun and interesting.

Holy Moly, in a few days time it will have been 20 years ago!

Bizarre glitches in Mortal Kombat 3. Or rather, for one, specific home port.

Not that the earlier games were bug-free (Ermac, anyone?), but Mortal Kombat is one arcade game, Mortal Kombat 3 is another (running on substantially different hardware), and this is a home console port.

Did they try blowing on the cartridge?

As someone whose experience of Mortal Kombat is limited to occasionally watching someone else play it in an arcade, I seriously cannot tell how much of this is normal behavior. It is perfectly in character with what I know about Mortal Kombat to see someone turn invisible and beat the other player half to death, then turn into a fan and fly around. I’d believe that’s something the designers intended you to be able to do with the right super-obscure series of inputs.

I am not sure if this is the best thing about this video, or the worst.

I do know that I stopped watching midway through the second match.

I know nothing about this game, so can someone explain why there’s a woman buried waist-deep in the desert on one of those levels? Is that a glitch or a feature?

Pretty sure that’s Cyrax. He’s a cyborg and a ninja.

Is it not a gender reversal on Talhoffer’s solution to the perennial problem of how to conduct a trial by combat ( MORTAL KOMBAT!!!) between a man and a woman? 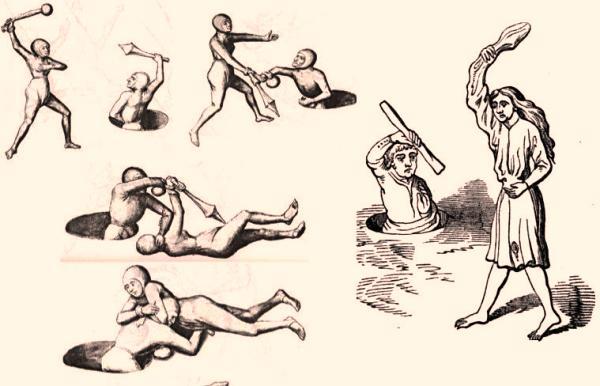 I can’t believe I watched that entire video and was fully entertained. I pray for the earth.

I can’t believe I watched that entire video and was fully entertained.

Me too. Oddly compellng. And up until fairly recently, I thought “Tekken 3” was the latest in a series of action-movies set in Newcastle, which shows how much I know about fighting games.