Bloom County on the heyday of newspaper funnies 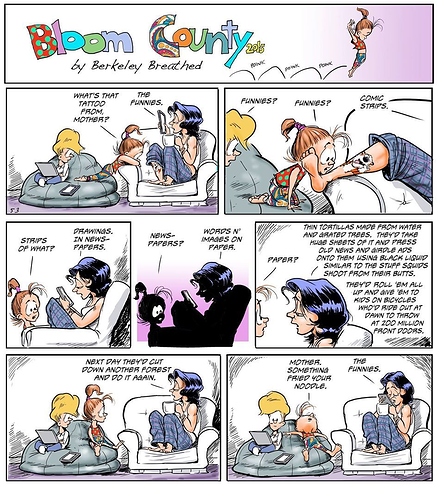 Pretty cool of Breathed to put Hobbes (if I’m seeing it right) on her leg instead of Bill the Cat.

He and Calvin & Hobbes creator Bill Waterson are old friends

And enemies (in a friendly way – mainly because of their differing philosophies on merchandising).

I’d bet Breathed wasn’t born within a decade of the heyday of newspaper funnies.

he was born in 57. unless you put the heyday before the mid 40s i wish i’d taken you up on your bet.

In the old days, my dad would have the full spread of the newspaper blocking his face so I couldn’t get his attention. Now, we have these tiny phones and tablets, but we hold them much closer to our faces… to block out everything else!

Love those details evident in this strip. So much excellence here.

I’m just pissed he’s posting to FaceF**k: in fact I can’t find a way to get an RSS feed for his GoComics page either.

And enemies (in a friendly way – mainly because of their differing philosophies on merchandising). 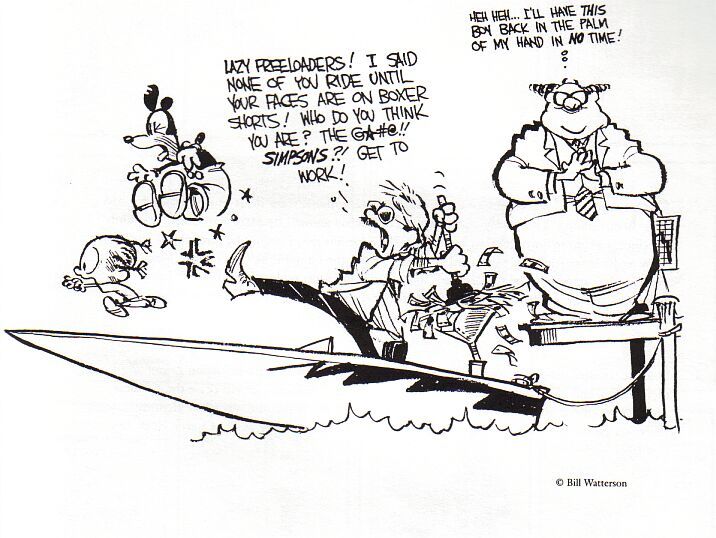 RSS feed for his GoComics page

Could you update us if you find a good feed?

Figured out a roundabout way to dig up another GoComics feed’s url, but I couldn’t then apply that to their Bloom County 2015 comic, so I guess it’s FaceF**k or nothing.

i understand your point to an extent but i also recall a time in the 70s when the dallas morning news ran a sunday comics section that was 24 pages (6 full-size sheets of newsprint) and had some of the prestige comics 2 and 3 to a page. their competitor, the times herald, didn’t have as many sunday strips but they ran color comics 7 days a week. it’s almost hard to imagine a time period more favorable than that.

sunday comics section that was 24 pages

Well, at least he paid homage to a decent comic strip…

Ditto. It takes some of the triumph out of the “triumphant return.”

At least it works! Thanks.