The big deal was, in a lot of countries at the time, you paid for data downloads on phones and this album cost people big money. So people were out of pocket (my memory wants to say, in some cases hundreds of dollars).

not sure where Tim Cook fits in though

Which makes the rest of us Negativland, I guess. 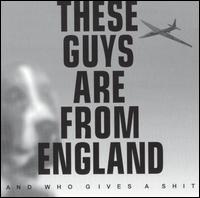 These Guys Are from England and Who Gives a Shit

These Guys Are from England and Who Gives a Shit is the 2001 re-release of the U2 EP by Negativland. It contains both tracks from the original EP, plus some tracks from the 1989 Over the Edge broadcasts on which the original EP was based, as well as live tracks recorded at the Great American Music Hall in San Francisco. The album was called a "bootleg" and released under "Seelard Records" as a joke, but in fact it was a real release by the band. Several of the live tracks on the album contain Tr...

Call me cynical and/or bitter, I’m not really in a position to deny that today; but apologizing now for something that happened in 2014 and has already been more or less roundly denounced and apologized for seems more like luxuriating in your perceived importance than sincere contrition.

Maybe I’m being too hard on the guy, and it really does eat at him at night; but from the perspective of the public this seems rather less like a relevant apology and rather more like that guy drunk-dialing his ex who is long over him to make a maudlin apology for being garbage while they were together; frankly unhelpful and overtly about the apologizer rather than the apologizee.

You are bitter and cynical; a mere empty husk of your former optimistic, youthful self.

(Did I get the rules right?)

Maybe I’m being too hard on the guy,

Unpossible. Keep it up.

That’s a new one. I’ll take your word for it, but I thought the album was only available initially in the itunes cloud. All the complaints that I heard were basically “I don’t want this album!” Which to me means… ok, delete it, then.

It couldn’t be deleted. It hung around like a dog turd smeared in the treads of your boot.

Everyone at Apple HQ had essentially the same reaction as you, “who cares if there’s another album in their library?” They learned that a whole lot of people cared, a lot.

I cared because I have never bought a single anything through iTunes. Not one; I find the entire “locked down music thing” utterly despicable. So my “library” was so clean that it never showed up in my iTunes app; the only thing I saw were the discs I ripped on my PC. Suddenly, at the very top of my Music library, was a single album that I did not ask for, want, or would ever listen to. It gave me a giant middle finger every time I opened iTunes.

So I stopped using iTunes. Completely. I host music on my own server (using Plex), and listen using the Plex Music app. It’s not convenient - Apple is actively hostile to apps that replace their apps; they don’t allow you to register a “replacement” app for Music or iTunes (or Maps or Messages or Calendar or …). So Siri is useless for music. But I’d rather rub two sticks together than use their iLighter when they treat me like this.

(And no, Android is far worse than Apple because it’s backed by Google, the world’s largest advertiser who is actively undermining its privacy at every turn.)

(And no, Android is far worse than Apple because it’s backed by Google, the world’s largest advertiser who is actively undermining its privacy at every turn.)

Basically, Bono is the Steve Jobs of music

Wait, are you saying that Bono was unable to actually create anything, but was mean enough to the rest of U2 that they let him take credit for everything?

but was mean enough to the rest of U2 that they let him take credit for everything?

To be fair to him (why? It sticks in the craw) but they split the royalties relatively equally. It’s the real secret of longevity in a band. Divvie it up four ways (or six in their case I believe).

1) And that’s invaluable.
2) You know the situaton. Two or more guys - same first language, same field, etc - meaning the same thing, having basically the same opinion, still arguing the same point for days for no apparent reason…
3) “When the food is good enough, the grunts will stop complaining about the incoming fire.”

Oh yeah. Creating relies on all the people in the room. But paying them shows you respect that.

…they don’t allow you to register a “replacement” app for Music or iTunes …So Siri is useless for music.

I think you may have to implement the Siri API in your app to support this, and I don’t know if Plex has done that.

apologizing now for something that happened in 2014

I don’t think that he’s just now apologizing. I think it’s that he has been and is still apologizing for it.