Originally published at: Bono apologizes for that time U2 put an album on your iPhone | Boing Boing

It says just as much about Apple’s management at the time that they could be so easily swayed by one egomaniacal musician.

I’m glad that Apple got all the shit for it that they so richly deserved. They learned a truckload about their customers, and aren’t nearly as likely to pull that kind of stunt again.

That’s amusing because i was just talking about the U2/Apple debacle with my gf over the weekend. It must be really embarrassing for U2 in the sense that they were probably really excited about the album, got a really great partnership with Apple to get music to a lot of people… aaaand what ensued was a hatefest.

Honestly Apple could have handled it better by making downloads of the album on their platform free for a month to whomever wanted to get it, instead of pushing it onto people’s libraries regardless if they wanted it or not.

Honestly Apple could have handled it better by making downloads of the album on their platform free for a month to whomever wanted to get it, instead of pushing it onto people’s libraries regardless if they wanted it or not.

This was the key. Lots of people enjoyed the album and were happy to have it, I’m sure. But the fact that Apple could just do that to everyone’s phones was creepy and weird. Everyone sorta knows deep down that these tech companies can do this sort of thing, but to actually do it, and for something so trite was really tone deaf.

It was like breaking into someone’s house and making them breakfast. I mean, great, thanks for making breakfast, but maybe ask first next time? You took a nice thing and made it super weird.

If it was actually an album worth listening to I wonder if things would have turned out differently.

Music is intensely personal. Having an unwanted album shoved into your library is exactly like sticking a photo of Steve Jobs’ family in your photo stream. It doesn’t matter if it’s a nice picture, it’s an unwanted intrusion into a personal space.

Didn’t help that I dislike Bono and U2.

If Verizon or Moto wanted to put free music on my phone I wouldn’t have a problem with it, as long as could delete it and use the player of my choice. It’s not like Android is completely open but I still think it’s better than Apple.

It was like breaking into someone’s house and making them breakfast.

I like this analogy. I’ve given a key to my house to a casual friend who lives nearby, in case of emergency. But if they broke it and made me breakfast, they’d no longer be my friend and I’d change the locks.

But with Apple, most people didn’t even ask for the key back.

It is almost like Apple is trying to show just how much power they have (and can wield) over folks.
Like the crazy stalker who leaves you messages in your underwear drawer.

That U2 song? I keep it around as a reminder that Apple put it there in order that their upcoming big event could talk about U2 rather than about the leak of intimate images from the iCloud account of Jennifer Lawrence.

I mean, while I’m glad he apologized, this is kind of what we’ve been saying since day one. Itunes has always been “you’re renting your record collection from us and we can do what we want with it.” When people like Cory and others pointed that out long, long ago, the cries of “you just hate technology” were abrasive and rude and intentionally deflecting from the point.

People got exactly the service they signed up for, even though they didn’t read or believe what people were warning them about.

I think it’s more that they forgot that the optics of power are bad. They drank too much of their own Kool-Aid and forgot that they don’t necessarily know what’s best for all of us. There was nobody in the room where they decided to do that saying, “uh guys, what is the average user going to think about this?”

It did lead to one of my favorite Jim’ll Paint It works, though, which I’ll repost every time I get the chance 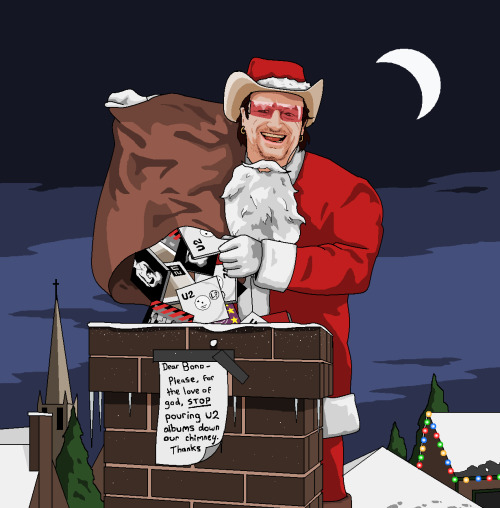 Jim'll Paint It • Bono dressed as Santa shoving U2 CDs down chimneys...

If it was actually an album worth listening to I wonder if things would have turned out differently.

I thought it was pretty ok.
FTR, I’m a fan of the band, have been for so long that the first time I saw them the ticket was 13 dollars (I used to save all my stubs and flatbed scanned the survivors in batches a long time ago) but even if I was not… I have to be perfectly honest, I don’t get what the big deal was. It went into your Itunes library. It was never on my phone. It showed it AVAILABLE to download locally. I think I did eventually, but to my Mac. It seemed like a very small thing that literally didn’t cost anyone anything and to hear people complain about it with such vigor seemed really, really weird to me.

Coincidentally, I just came across this clip from The Big Fat Quiz of 2014 where there’s a question about Bono’s non-apology back then.

I really like U2 and that stunt annoyed me.

Apple will do better next time. They’ll put a Yoko Ono album on your iPhone.

I have to be perfectly honest, I don’t get what the big deal was

People really don’t like it when their music library is messed with.

Basically, Bono is the Steve Jobs of music

… not sure where Tim Cook fits in though