Originally published at: Britain spewing so much sewage into waterways that European neighbors worried it will wash up on continent | Boing Boing

It’s one way of ruling the waves, I suppose.

Waiting for Priti Patel to announce the sewage cannons that will entirely divert the sludge from UK beaches and simtaneously shower the continent in it as far away as Germany.

I imagine Britain seen from space rather like a Gemini capsule after splashdown, when it exuded all that yellow marker liquid. 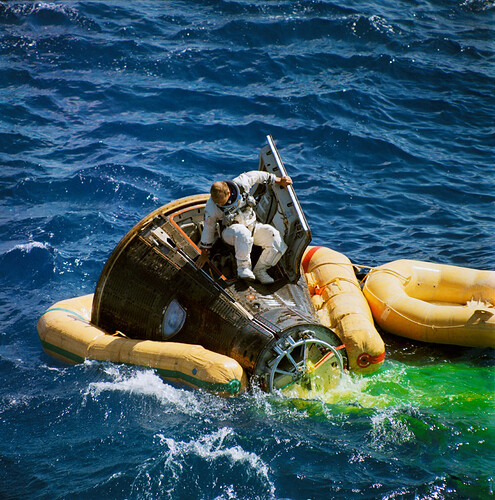 The England&Wales water situation is ludicrous right now. The usual argument behind privatisation is that competition encourages innovation within a market - there’s a decent case that this was clearly true for telecoms, marginally true for energy and not true for railways. But water isn’t like any of those things.

And this situation has been exacerbated by Brexit because the sewage issue is almost entirely a result of difficulties in importing the treatment chemicals. The water companies were given a stay of execution not too long ago, but they seem to have entirely squandered it and continued to take excess profits and inadequate investment (notably passing almost all the costs of the latter onto the bill payers and not really affecting the profits at all.)
And now the big owners (many hedge funds, surprise, surprise) are going to play the “too big to fail” card and claim that any problems need to be funded by the tax payer and they should not be liable for things “outside of their control”.

As ever, it’s hard not to admire the sheer cynicism at play here. And I am not even sure that some of the CEOs even realise that it is cynicism because they are too tightly wound into the MBA corporate model; the problem is just so much bigger than this particular case.

the sewage issue is almost entirely a result of difficulties in importing the treatment chemicals.

I really don’t think so. [I’ll revert to what I originally wrote - and did write further below.]
Utter bollocks!

It is because they have not invested enough in building infrastructure to manage and treat sewage. Given our drought, the moment we have rain it flows off the dried hard surfaces into storm drains which are also sewers and the water authorities’ facilities overflow so they release it into rivers or pump to marine outfalls.
Same happens in winter when there is too much rainfall, but fewer people swimming in the sea to notice.
It’s an infrastructure capacity issue.

I could provide citations aplenty but some well-worded polemic gets to the nub of it better: 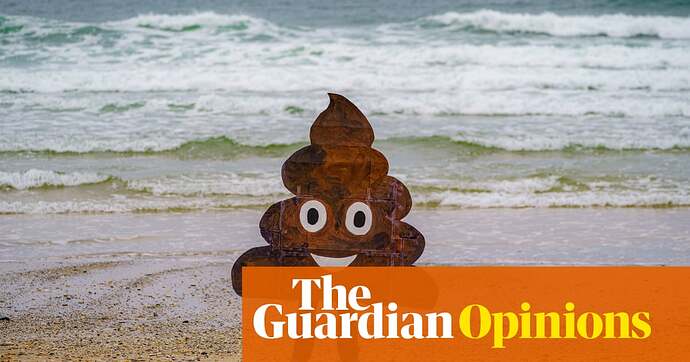 Roll up, roll up and meet the watery overlords pumping sewage on to our...

Why focus just on the politicians where there are plenty of CEOs out there with excrement on their hands, says Guardian columnist Marina Hyde 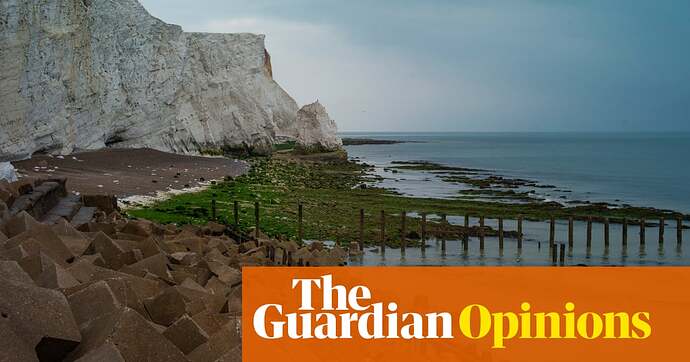 And many of their own sewage outfall monitors are faulty (knowingly?) so we don’t get told when their own facilities are spewing this stuff, and probably this helps them avoid having to ‘self-report’ it. 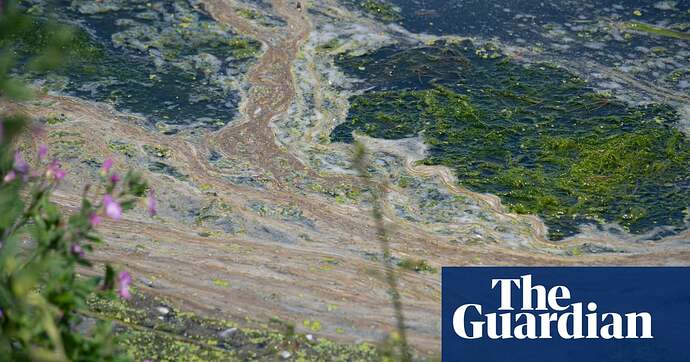 Liz Truss ‘has sewage on her hands’ over Environment Agency cuts 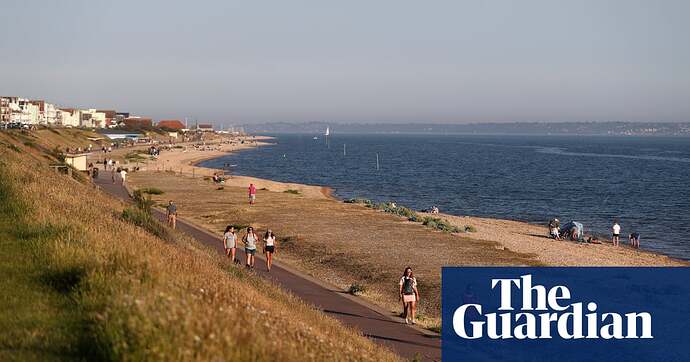 Funny how none of the press stories I’ve seen (and I’ve seen plenty) mention water companies claiming a shortage of chemicals, which you can bet every water company’s press officers would be shouting about from the rooftops if there were even a grain of truth in that being their problem.

Maybe you can find a story or two about that, but it does not change the root causes - privatisation, loading with debt, huge shareholder dividends and regulatory capture - and even if you CAN find such stories it is complete bollocks to say this is

almost entirely a result of difficulties in importing the treatment chemicals

ETA the government itself says:

Storm overflows are safety valves built into the combined sewer system to discharge excess sewage to rivers, lakes, or the sea when rainfall exceeds capacity. This protects properties from flooding and prevents sewage backing up into streets and homes during heavy storm events. A growing population, an increase in hard surfaces and more frequent and heavier storms because of climate change have increased pressure on the system, bringing the frequency of discharges to an unacceptable level.

Brexit Britons dreaming of war might never get to see battle, but dysentry will soon be on-tap.

This is horrible overall. 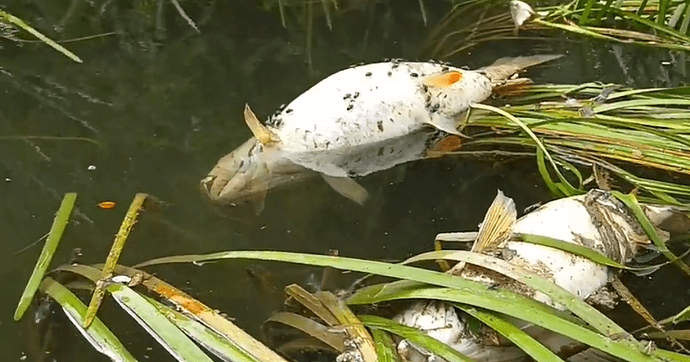 Thousands of fish dead after serious pollution near Swindon

Now let’s bring back the Bovril Boats and gong farmers.

Nah. She’ll use it to keep those “illegal” migrants at sea.

The England&Wales water situation is ludicrous right now. The usual argument behind privatisation is that competition encourages innovation within a market

One of the big arguments for privatisation was that when state owned the water boards couldn’t raise the necessary capital for improvements without unbalancing the government books. When freed from state control they would be able to apply for commercial loans and pay the money back over decades.

Instead, they chose to whack up the cost of water to customers, borrow massively on the stock market (£56 billion in total) and send £72 billion to their shareholders. In that time, the population has grown by about 10 million people - largely in the dry SE, and the privatised companies have not built so much as a single reservoir in England. Right now, they lose about one quarter of all the treated water in the system.

One of the big arguments for privatisation was that when state owned the water boards couldn’t raise the necessary capital for improvements without unbalancing the government books.

Which was a largely fallacious ‘argument of convenience’ for the govt at the time, as they had it within their power to alter the way that capital funds might be raised and how to account for them. They wanted the revenue hit from privatisation and wanted to help their ‘friends’ in the capital markets.

(And in any case govt books are only ‘unbalanced’ by capital spending if one takes a very particular - and wrong-headed - view of things, IMHO.)

And Rees-Mogg is really already the modern-day metaphorical equivalent of a gong-farmer!

Quite - the Tories are still wedded (at least when it suits them) to the fallacious equivalence between a national economy and a household budget. They can find billions when they need to spray it over their donors, but when it comes to supporting the little people - nanny always has to tighten the purse strings.

Exactly all this. Investment into infrastructure has fallen massively over the last 30 years, since privatisation. The system simply isn’t fit for purpose.

The i newspaper today (p.12) had a feature naming and shaming all the water-bosses - salaries vs. thousands of hours of sewage dumped, quite eye-opening, including fishermen in Poole harbour being advised not to catch shellfish.

To top it off, there was a sponsored four-page pull-out advert for mastercard in the centre section on the joys and benefits of “Wild Swimming”.

Oh, that’s true as well; I accept that saying “almost entirely” was not a good choice of words. The untreated sewage problem does seem to be a Brexit chemicals problem; in my defence I will note that I did say that it was being “exacerbated” by this, not that it was the sole reason.
The fact that the storm drains are also sewers and the overflow therefore ends up creating an extra problem is definitely an infrastructure issue, and is clearly a much bigger problem overall.

But in general, we’re clearly in violent agreement here - the problem is debt, dividends and regulatory capture; I was just noting something that wasn’t also true of far too much of the rest of late capitalist structure (i.e. not just ‘private water companies’.)

Only in tiny part.
Brexit may have made it harder to find certain chemicals, but the whole system has been on the slide since the late 80’s/ early 90’s when the water companies were privatised. Profits now go to shareholders rather than to maintaining necessary infrastructure.

It is a dam that has been waiting to burst, for want of a better analogy. 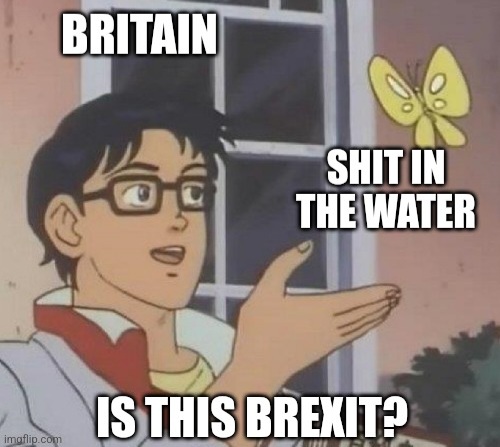 That should read “DEAD in the water.”

…I hate it here