What, nothing to counter face-recognition AI’s? Pshaw…

In a perfect world, the royal oppressors would be cast out and replaced with a more equitable and democratic system, with much less need for protection from the opressed.
Dystopian (for heads of state) my ass. They constructed their own scenario.

I wonder if they make a version that protects against dismemberment. If only Khashoggi had had one of those.

For Western wear (er… Western, not Western… uh, hrm… not cowboy stuff) this company in Columbia has been making high end clothes for awhile.

While I agree, tailored bullet-resistant undergarments to be worn under Western suits have existed for at least a couple decades and run considerably more expensive than already normally very expensive bullet-resistant vests. So while it’s certainly a class issue, its global and not really unique to Arab aristos. I hadn’t thought about these tailored aramids in years, but I’m mildly surprised Arab tailors haven’t already done this.

They have a line with bone saw holsters?

Can I order a custom bathrobe? Asking for a friend.

So while it’s certainly a class issue, its global and not really unique to Arab aristos.

This is true. Crony networks existed for centuries before the coining of the word “globalization”.

“This is not what I was expecting from the dystopian cyberpunk present, but here we are.”

Weird, that’s exactly what I was expecting. It’s not even dystopian cyberpunk - it just seems like something that should have already existed for a while, given how many decades ago I was seeing rich Saudis in Europe with gaggles of bodyguards… The only thing vaguely “cyberpunk” about this is the improvements in material science that has made “bulletproof” clothing more lightweight.

Now, bulletproof kid’s backpacks, on the other hand…

So, how often do conservative Saudi gentlemen get gunned down in the street? I wasn’t even aware that that was a thing. I had just assumed that getting disappeared and dismembered was a much more likely thing to happen.

I wasn’t even aware that that was a thing.

The rich and powerful are very paranoid. They assume everyone thinks just like they do.

I had just assumed that getting disappeared and dismembered was a much more likely thing to happen.

Aramid is a portmanteau of aromatic polyamide.

I assume possible royal assassins watch John Wick like the rest of us and know a double tab to the face gets every job done. 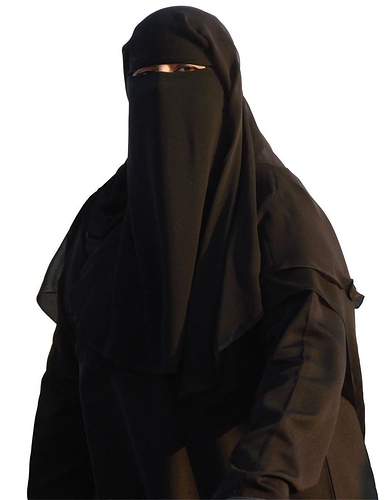 Defence is all about reducing the target area.

The video has been removed.

Given it is Colombia, I wonder how things are at his shop. I mean, he has to be selling those to people from politicians to drug lords to paramilitary leaders…

Give it a bulletproof VR goggles with a camera and it gets complient with theyr modesty laws while removing any targetarea.

You can get a bulletproof calendar. https://violenceresponse.com/product/bulletproof-desk-wall-calendar/ Still not as distopian as these little items from the 40s https://rarehistoricalphotos.com/gas-masks-babies-1940/

Aramid is a portmanteau of aromatic polyamide.

And kevlar is a type of aramid.