They should stop growing almonds. It takes something like two gallons of water to grow a single nut.

I wonder why they do water restrictions rather than just raising the price of water?

So the major user of water, agriculture, is left untouched? Just better reporting on how much water they blow through? Barely nibbling around the edges of the problem.

because raising the price doesn’t really affect the people and companies that can afford it.

**Plus it doesn’t have an immediate effect. Water usage wouldn’t slow down for a couple of months until people really started to look at their water bill.

What the hell are “acre-feet”?

Could someone please convert that to gallons or liters?

The acre-foot is a unit of volume commonly used in the United States in reference to large-scale water resources, such as reservoirs, aqueducts, canals, sewer flow capacity, irrigation water, and river flows. As the name suggests, an acre-foot is defined as the volume of one acre of surface area to a depth of one foot.

One needs to understand how water is priced in the first place for agriculture water districts. When folks say, “ag is only paying 10%” of the urban rate, they’re missing two things: (i) ag water isn’t treated like drinking water, which lowers the cost a bit, but (ii) ag districts aren’t paying “for the water” they are paying to have water they already own delivered to them by reimbursing the federal and state governments for the capital and O&M costs of the water systems. Some of that is priced on a per-delivered acre-foot, but it is manifestly not – as a legal or contractual matter – the state of California’s water to sell in the first place. It’s owned by the individuals and the ag districts who have long-term (20+ year) contracts for delivery, so it’s no small thing to say “oh, here, up your rates”

On the other hand, local urban water districts can up their rates because there are only the PUC to govern rates, and no long-term contracts to address. And it’s a much easier political fight to squeeze local urban districts than it is to squeeze out – say – the likes of JG Boswell’s cotton empire or the almond business.

It’s pretty close to one of those pinko megaliters everyone is always going on about.

so, more then 80% of the state’s water usage is in Agriculture and their measure has been to have the agriculture industry look at all the water they’re using and really think about maybe not using so much… maybe… in the future… but only after everyone else in the sate is living like a fucking Kupa in the Mario Brothers movie.

The miner's inch is a unit of flow in terms of volume per unit time, usually in relation to the flow of water. The definition of a miner's inch varies by location. In hydraulic mining and some forms of placer mining, as well as ore dressing, a large and regular supply of water is needed. The miner's inch is a method of measuring the amount of flow a particular water supply system (such as a flume or sluice) is capable of supplying. The miner’s inch was derived from the amount of water that would ...

I was in Palm Springs in 2010. I’ve never seen the desert before, and found it breathtaking in its beauty. I’d also always heard the expression “it’s not the heat, it’s the humidity” but didn’t really appreciate what that meant until I’d experienced it.

The resort I stayed in was a series of buildings surrounding a large golf course. And all I could think of as I walked by it was, where does the water come from? Part of the airport lobby had no ceiling. I asked someone, “What happens when it rains?” And they laughed, understandably.

I think golf courses shouldn’t just reduce. They should be allowed to dry up. I’ve played golf. I don’t think it would be so bad in a xeriscaped garden.

This desalination plant opens in North San Diego County this fall. California should be building these by the dozens, why they don’t is anyones guess. 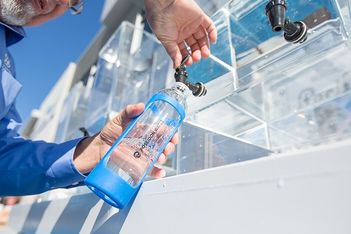 The Carlsbad Desalination Project is the largest desalination plant in the Western Hemisphere. Located in Carlsbad, California it converts sea water into 50 million gallons of drinkable water per day. Learn more at our site or come for a tour.

It’s about fahking time.
My local water agency raised prices last year, with big jumps for each tier of usage. Sorry I don’t smell as good as I used to, but my showers have become fewer and further between.
If only people (and property management companies and golf courses and…) would get rid of their lawns, we’d be in slightly better shape.

Orange County has been filtering poo-water. 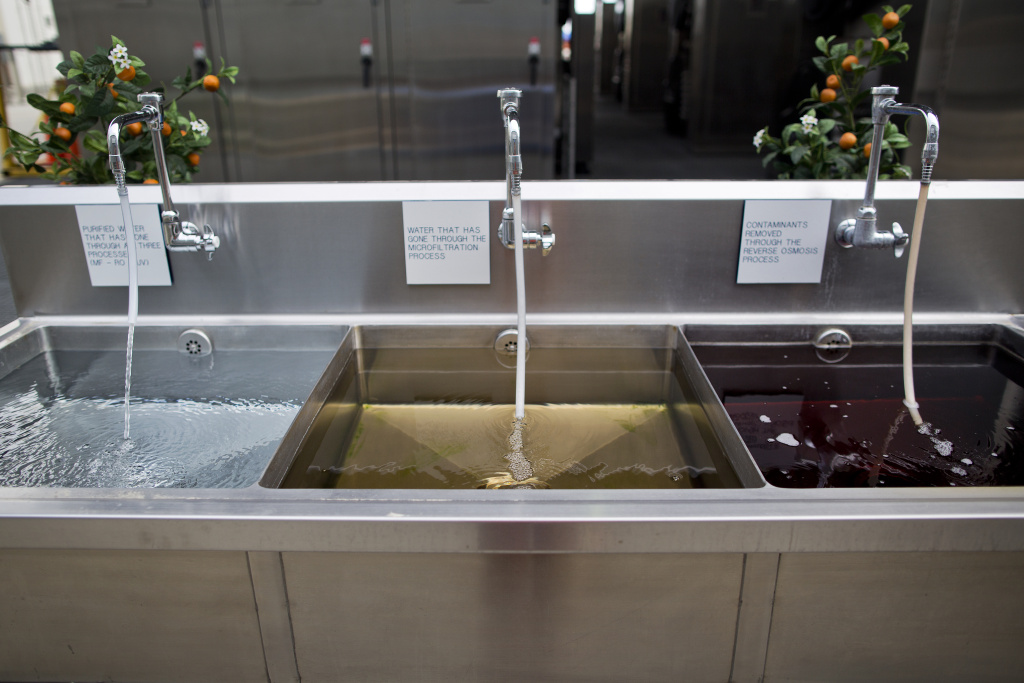 But how much is it in Olympic-sized swimming pools?

660,000 gallons
It takes six and a half years for the average American residence to use the amount of water required to fill an Olympic-sized swimming pool (660,000 gallons).

Just think of all the BEER that could’ve been made with that water.