Haven’t we all ended up wearing body parts of our cellmate at one time in our lives?

jeesus fracking christ on a cracker.

An he is such an innocent looking young man…

Every part of this story is pretty much an indictment of the criminal justice system.

Also, this just shows how the Epstein suicide was not at all suspicious. If guards continue to insist an inmate is fine after having been tortured, murdered, dismembered and worn as decoration, they’re hardly going to notice when someone hangs themselves.

I read the headline and saw the image and the first thing that came to mind was “Florida”. Can’t explain it but there it is.

What the actual FUCK…

Pretty much. The article delivers so much more than I was expecting from the headline. Not things that I really want either.

Haven’t we all ended up wearing body parts of our cellmate at one time in our lives?

I’m wearing his face on my head. It’s ME

That poor man, he was tortured and no one even attempted to stop it.

You’d think the Simplicity pattern for 1.2 yd. Any Cellmate Fabric and the fitting series would have tipped them off.

Wow~! A playlist! When are the Pilots supposed to whip journalists out and stick them in corrupt places though? Er…I mean, get enthusiastic journalist consent for a local stop?

Pretty sure you can’t “kill and torture” someone. The dead don’t torture well. Pedantic for sure, but respect for what this woman experienced is important. She was tortured, then she was killed. I have to suspect that this guy experienced something similar, especially since the phrase “makeshift knife” does not make me think it was at all quick.

Also, this just shows how the Epstein suicide was not at all suspicious

all our many deaths in custody are totally sketchy and absurd, that’s how we know they’re legit

a “flair for Charles Manson-like satanic antics,” so I have inaugurated the “flair” tag for this post.

So there’s already a tag for “satanic antics”?

I’m wearing his face on my head. It’s ME 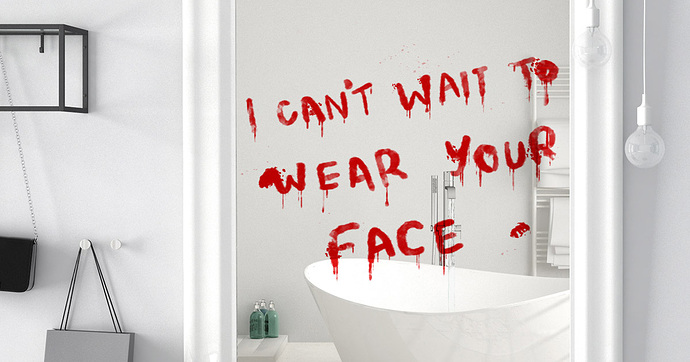 Just Following Up On That Creepy Message I Wrote In Blood On Your Bathroom...

Hope you’ve been well! Just circling back to get your thoughts on that message I left on your bathroom mirror the other night (the one…