Must have been a day ending in “y”

hmm… I never realized that “bad boys” refers to the Popo

Why was it sealed under a protective order? Was the idea that the act was so heinous that if released it would cause violence against the police? If that’s the case, why are there no criminal charges for the heinous act?

That’s nothing. In Durham, NC, a handcuffed teenager in the back of a police cruiser. . .shot himself in the head. The bullet entered through his mouth. His hands were cuffed behind him. 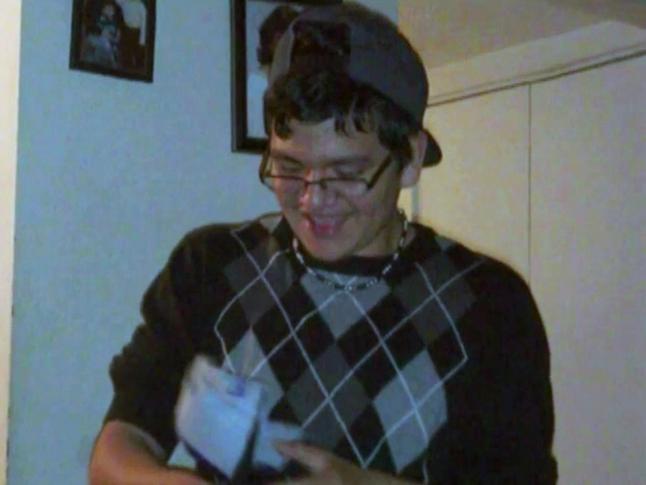 Durham's district attorney said Friday that, after further review, there's no probable cause to file charges in the death of Jesus Huerta, a teenager who police say shot himself while he was handcuffed in the back of a patrol car in November.

By 2 a.m., according to police, Huerta was dead – his hands still cuffed behind him, slumped over in the back seat of the car outside the Durham Police Department – and a handgun was found on the floorboard of the patrol car.

No charges were filed, of course. The Durham County District Attorney and State Bureau of Investigation said there’s no evidence of wrongdoing.

Completely justified. If he hadn’t been there being, this would never have happened. Plus, I’ll bet he lunged. Did he lunge?

The clever comedic comments for this tragedy is pretty effin sad.

The officers explained to him that he was not under arrest and asked him to sit in a patrol car with his feet outside the car. Mr. Jaramillo refused and resisted. One of his hands became un-cuffed and Mr. Jaramillo continued resisting.

If he wasn’t under arrest, what were the handcuffs about?

It’s getting to the point where, if you’re a POC, you’re better off instigation an armed standoff and waiting for news crews to arrive if you want to live.

Hell if they’re going to kill you anyway you might as well take a few with you. If I were on a jury and the defendant was a person of color who shot at police entering their home I’d have to consider that the shooter had justifiable reason to fear for their life.

handcuffs don’t mean arrest - officers are allowed to handcuff you ‘for their own protection’ without placing you under arrest.

That sounds dicey to me. If I am restrained by the police and denied the ability to go where I please, that’s arrest.

According to the Cornell Law School

An arrest is using legal authority to deprive a person of his or her freedom of movement.

asked him to sit in a patrol car with his feet outside the car. Mr. Jaramillo refused and resisted

They asked him, then sat on him when he said no.

You’re doing a kind of, “Webster’s Dictionary defines arrest as…”, which is not relevant to the law.

I think we’re in the “farce” part of repeating history when US police recreate Giles Corey over and over.

No, I’m doing “Cornell University Law School Legal Information Institute lists the legal definition of arrest as” which is relevant to the law.
That police and procedural fetishists have attempted to change that simple definition to fit their authoritarian goals does not change the meaning.
Additionally, the Fourth Amendment applies to “seizures” and it is not necessary that a detention be a formal arrest in order to bring to bear the requirements of warrants or probable cause. (same source)

When Can Police Place You in Handcuffs?

Many people associate being handcuffed by police with being arrested and read Miranda rights. However, there are several different situations, including but not limited to being arrested, in which police may place you in handcuffs or other restraints...

For officer safety purposes. The same rationale that
allows officers to handcuff occupants of a premises being searched also
applies to other situations in which an officer feels he or she may be
at risk. As a training bulletin used by the Los Angeles Police Department
states, “The handcuffing of an arrestee is not based on rigid criteria.
It is determined by the nature of each situation as perceived by the
officer.” If an officer feels that placing a person in handcuffs is the
best way to ensure his or her own safety, then a court would not likely
find that the officer had violated the rights of the person being
detained.

The City of Oakland is settling a suit for Mr Jaramillo’s death for $450,000.

That could have paid for more than a few library books and school librarians, and it won’t bring Mr. Jaramillo back to life. I guess the City of Oakland has different priorities than typical Oakland residents.

I’m not changing the definition - you can be handcuffed for something as simple as a speeding stop - the cops are trained to say “I’m placing handcuffs on you for your own protection” - and very very rarely will a court ever give them grief on it. Your chances of actually causing a stink go way up if you are wealthy enough to send lawyers at them - otherwise the ‘system’ is so overstressed processing ‘make crime’ (gotta make those voters happy you are tough on crime!) that no one is going to bat an eye, they just don’t have the energy or time.

Your 300 cases public defender that can’t do simple research on a serious case due to lack of time isn’t going to go out of the way to do it.

LA police department training materials are not law nor do they represent a reasonable methodology for the training and education of a police force as evidenced by the past several decades of payouts to those wronged, beaten, murdered, attacked, and brutalized by the policies of that department.

Pay close attention to how this is worded

If an officer feels that placing a person in handcuffs is the
best way to ensure his or her own safety, then a court would not likely
find that the officer had violated the rights of the person being
detained.

Not likely. Of course not. Because we rarely hold the police to a reasonable standard in court. We let them kill people and walk away free. That it is not likely and the officer will be given a pass is not an indication that handcuffs are not an arrest but rather that a case will likely not be dismissed over it.

Your 300 cases public defender that can’t do simple research on a serious case due to lack of time isn’t going to go out of the way to do it.

So yeah, it’s an arrest but since no one will challenge them on it then it’s ok. That’s your new position?

additional edit after reading your source:
under the subsection For officer safety purposes we find this

“The handcuffing of an arrestee is not based on rigid criteria. It is determined by the nature of each situation as perceived by the officer.”

(emphasis mine)
So even your source calls them an arrestee.

Isn’t the urgency of the need to defend yourself from a perp that crafty, flexible, and dexterous basically self-evident?

Kid must have been some kind of gun-fu ninja, a clear and present danger to all nearby.