In KC, they (the city) are putting up “expression boards”, near the protest areas for this express purpose.

I have to say, while the response and police actions have not been perfect, the Mayor of KCMO has been on the ground, talking to protestors, and kept the police response light. And in turn, the protests have largely been peaceful. I dunno if this is our general Midwest chill, or if the actions by authority are influencing better actions. Last I heard the city is looking to implement several of the protestor demands with how the police are handled.

I dunno if this is our general Midwest chill,

I’m guessing not this. Chicago and Minneapolis aren’t particularly coastal or chill at the moment. Even Omaha is making the news for their protests. I’m guessing a lot of it just the better administration you mention.I know you can lay a lot of the terrible outcomes in my city (Cleveland) at the feet of administration decisions.

These ones came down last week: 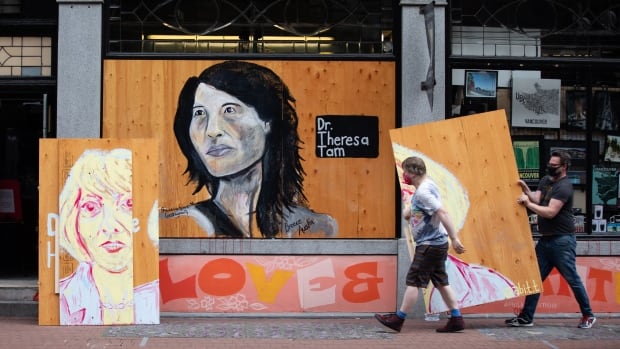 The portraits of Dr. Bonnie Henry and Dr. Theresa Tam were painted on a boarded up storefront and will be stored for safe keeping now that the shop has reopened for business.

Edit: they came down because the buildings behind them were reopening not for any nefarious reasons.

I dunno if this is our general Midwest chill

You’re in the same state as Ferguson, so it’s probably not this.

And in respect to the original topic, there were some excellent paintings on the window boards of Ferguson after the 2014 protests.