Can video games be a spiritual experience? Answer: yes!

Hell yeah they can. 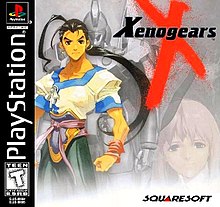 Xenogears[a] is a 1998 role-playing video game developed and published by Square for the PlayStation video game console. It is the debut entry in the larger Xeno franchise. The gameplay of Xenogears revolves around navigating 3D environments both on-foot and using humanoid mecha dubbed "Gears". Combat is governed by a version of the turn-based "Active Time Battle" system. The story follows protagonist Fei Fong Wong and several others as they journey across the world to overthrow the all-powerfu...

This bit of interactive fiction (Blue Chairs - Details), by the author of Twine, was not only a definite spiritual experience for me, but showed up in my life at just the right time to help me get over a bad breakup.

Thanks, that got me in the feels, @joed!

Like finding a Digital Footprint on the garden path.

This “ghost racer” story reminds me of a scene in the much maligned (though I liked it) Speed Racer movie, where Speed is doing laps to try to beat his older brother Rex’s time and imagines his car on the track alongside him. Go Speed Go!

Genuine question: I have never played a video game in my life. What am I missing?

I find this hard to believe. You’ve never played Snake on a Nokia phone? Never tried Wordle? Never played Minesweeper or Solitaire on a Windows machine? Never played video poker or slots? If you’re really that sheltered and genuinely curious, maybe try watching the video in the original post.

Ok you got me at Minesweeper and Solitaire, but that’s about it. Gave up on those long ago.
Otherwise whenever I have seen anything about the sorts of games that are currently available, it just leaves me completely cold. I am baffled by the whole business.

I am baffled by the whole business.

I feel like you’re just being obtuse if you find the business baffling.

Some games are fun, some are addictive, some are both, some are just terrible and/or cynical cash grabs. Some can be played solo, some must be played with others. Some can be both. Really no different than meatspace tabletop games or even casino games. Video games are just computer-generated versions of these things.

They have grown to crude and simple things to what could be considered interactive films (with massive hundreds of million dollar budgets to match) that can provide for tens or hundreds of hours of playtime.

If you have a genuine intellectual curiosity about why video games are is such big business and so important to the cultural zeitgeist of the past couple of decades, there’s plenty you can read or watch about this online.

Genuinely, I’m not trying to be obtuse, it is just something that has completely passed me by, and it puzzles me why so many people are so heavily invested. I feel similar about comics, comic books, and graphic novels.Anyway it wouldn’t do if we were all passionate about the same things!

I’ve never surfed, so I fail to see why people make such a big deal about it.

I’ve never been to Paris, so I’m just flabbergasted that people keep talking about it.

See how that sounds?

It’s fine that you’ve never experienced video games. There is more stuff out there already than anyone can possibly experience in a lifetime.

But your puzzlement about what you are missing seems a bit disingenuous when there is nothing stopping you from trying out a video game. Not that you have to, just that you can.

It’s not even about passion. You’re basically saying, “I don’t get it, why do people like this thing?

” Do you like books, sports, art, movies, cars, or music? Are your interests more obscure or offbeat? Quick, now justify why do you like it?

It just seems like a weird position to join this discussion only to question why something popular is popular without showing much of a genuine curiosity in understanding why. It’s not hard to try video games out. There’s probably a bunch on your phone or computer already. There’s many that don’t even cost anything to try. Is there a topic that interests you? Chances are there’s a video game about it. There’s plenty of articles, videos, think pieces, and other things to read to understand why people love video games and why it’s such a big business. Hell, many of us here love video games and can answer questions or make recommendations. But it’s not fair or helpful to first require one to justify their love for something.

I’m not saying this is your intent, but this kind of contrarian position often only serves to derail the conversation. If a topic doesn’t interest you, that’s fine. But why the need make sure everybody knows this is the case?

Not quite the same but some of the myst crew made a game where you are a robot playing against got to prove the existence of humans, who have gone extinct. Do humans have souls? Do robots?

I can’t remember the name of it. I’ll have to try and find out…

You’re missing an interactive medium that can provide a wide variety of experiences. Some are essentially books with just enough interaction to keep an extra hook in you, some require skilled timing and can induce flow states similar to what is seen in athletics and music. To put the breadth into perspective the US gaming industry is larger than music and books combined. Personally I find it easier to look at segments of the market and point people to things that align with their other interests. The sector is too big to be viewed or explained as a while.

I like driving/racing games because I can do things I would never try in a real car without getting killed, sued, or stuck with a huge repair bill. Some games, like the late, great Carmageddon, encourage truly antisocial behavior that crosses my mind in real life but I don’t act on it there, but in the game I can. And that’s liberating. I’d be scared to death to fly a real plane on a windy day, but I love the sensation of flight in a good flying or air combat game.