Can you draw Nancy?

Of course not. It’s always penises. Every single time. 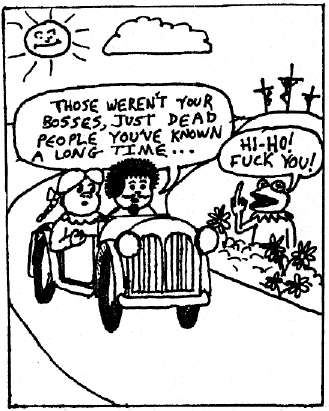 Todd: Okay, you sit down to read your paper, and you’re enjoying your entire two page comic spread, right? And there’s ‘The Family-fuckin’-Circus’ in the bottom right-hand corner just waiting to suck. And that’s the last thing you read, so it spoils everything you read before.

Claire: You could just not read it.

Todd: I hate it, yet I’m uncontrollably drawn to it. Are you gonna…

I know you said be creative, and I probably could, but there are plenty of clever ones here. This is just a straight attempt.

There are minute adjustments I would make actually, but thanks.

Ach! Balls. I put a new link to it. Better yet I’ll just upload it.

Having now looked at your site, I am even more humbled by the compliment, thank you again. After reading some of the above comments I went to Ray Braswell’s Warsaw Times link to discover just how far from the original my guesswork in fact was. (Edit: Ray Braswell’s is post 23 in this thread. Since I wrote this post he has returned and edited his post and reproduced the art in the post rather than just leaving a link as he had originally).

Interestingly one of the details I had felt was wrong was that the skirt lacked in a more pronounced angularity, and I was correct in that assessment. But I got the leg totally wrong. Jason Holm (post 12 I think) got it much closer. (Edit 1: Ah. Now I realize Jason Holm found the archived version of it and based his restoration on that. It’s great learning in public like this. Edit 2: I should have said he “got it much closer in terms of shape”, I think mine gets it much closer in “feel”. Since I wrote this post, he too returned later and edited his post, reproducing the art in the post rather than merely leaving a link).

So, anyway, my attempt at guessing what Nancy would’ve looked like was not very accurate. An interesting experiment nonetheless, and I think my rendering and reproduction was okay. (Edit: In other words, it was oddly convincing for a guess, perhaps because of the verisimilitude in atmosphere, which I think is to do with whether you can imbue magic, or love, into the lines you create, in contrast to just simply doing lines to represent something).

Reproducing the Warsaw Times version below. Unfortunately I haven’t got a decent resolution on it, but the general shape is clear enough to see the contrast. (And re-reproducing mine for ease of comparison).

Conclusion? No. No I can’t draw Nancy.

Just to clarify, I did my version without referring to other posts on here, nor to any archived version of the original. I only had the Fantagraphics’ incomplete version to go on, and research of other Nancy strips didn’t really help as she in fact doesn’t seem to occupy the all-fours position very often in the strips I found.

You can see that I was basing Nancy’s leg on the general dimensions of Sluggo’s in that panel. Also, I had ‘felt’ that there should be a space between the outline of Nancy’s skirt and foot, and the left panel border, as that is generally a rule especially in pre-1950’s comics, (and was in fact what Bushmiller had done) ; to try and make sure the whole figure is in-panel, not truncated. Extending the distance of the left panel border to accommodate the figure didn’t look right, so that solution was discarded. It was painful to do, but I went against the whole-figure-in-panel ‘instinct’ because Sluggo is cut off by the border in the next panel, so I thought it might not be visually dissonant to allow the border to cut off Nancy’s foot. Wrong.

AbeL (post 12 in this thread) seems to have ‘sensed’ that Nancy’s body may have been slightly smaller for panel economy reasons, and I have a suspicion Bushmiller made her body slightly smaller than he usually would for the same reasons in that panel. I seem to have made a contemporary fat Nancy.

It’s interesting how many people, independently of each other, correctly worked out what she was probably saying. I worried about the word fence for a long time before committing to it. At one point I had considered “rolled under there” based on the fact Nancy is pointing at the gap at the bottom of the fence.

When I first drew the outline of the word bubble it was actually closer to what Bushmiller had done, with a more pronounced upward arc towards the border, yet I had not been happy with that and made it less circular, to mirror Sluggo’s word bubble. Wrong again.

I may have suppressed the ‘expression’ in the skirt because I had over-sized the lettering and thus the word bubble, and to retain the sense of that compositional rule of not making things look ‘packed tight’, I had to keep space between the top of the skirt and the bottom of the word bubble.

Judging by Nancy’s face in panel 2, the Warsaw Times version may have been tampered with, as it seems to differ from the one Fantagraphics posted.

That happened to me when I first started on here (I got so mad about it I did a comic on here about it). It sorts itself out after you’ve browsed for a while I think.

What do trust levels do?

Assuming this link is for Chris Headrick, but thanks anyway. Now I know where I stand in the hierarchy more clearly.

I also understand the Boing Boing system goes 0, 1, 2, Mods, so you might be higher than you think…

Now I am back to not understanding anything about it again. I know some stuff about comics, I know virtually nothing about coding or system hierarchies in forum coding. I consider myself outside of any hierarchy in comics or coding, or if in any, very low in the structure to the point of being practically invisible.

As you may have noticed, I contributed to this thread due to my interest in comics, not coding or how the forum works. It was an aside that I happened to notice that someone in this thread was a little disappointed that they couldn’t post an image because they were a new user. From my limited knowledge I was simply trying to offer them some reassurance that they would eventually be able to post an image.

I am a little puzzled as to how I have become involved in a discussion about how the forum works in a thread that is about a comic strip.

It’s good to know where you stand.

Alpha children wear grey. They work much harder than we do, because they’re so frightfully clever. I’m really awfully glad I’m a Beta, because I don’t work so hard. And then we are much better than the Gammas and Deltas. Gammas are stupid. They all wear green, and Delta children wear khaki. Oh no, I don’t want to play with Delta children.

Regarding that: I thought this bit was funny from the link you sent me.

These five levels seemed like a great starting point for our user trust system, with one small modification – we renamed “novice” to “basic” to avoid any negative perception of being a so-called “novice”.

To a certain extent,the forum interface that boing boing uses (called discourse) is still in development. So @codinghorror is still kicking around ideas. Boingboing doesn’t have to implement all of discourse’s complexity, and “Leader” and “Elder” may never be used by bb.

But the basic concept of regarding newbie users with a certain amount of suspicion until they prove their worth cuts down on the spam and the bots.

It is possibly the only answer to Nancy. Perhaps I’m getting it. Er.