Can you draw Nancy?

I can’t speak for everybody, but I know that people like me and Art Spiegelman, Bill Griffith, Mark Newgarden, etc., don’t love Nancy in an ironic way at all. I believe it’s one of the most pristine comic strips ever created, made by an absolute genius of meticulous, economical draftsmanship and composition. The almost mathematical precision with which he sets up and delivers a gag is astonishing, even when the gags are dumb. He’s the Mondrian of comic strip artists.

Page 14 of 9/20/53 Warsaw Times newspaper has the complete original: 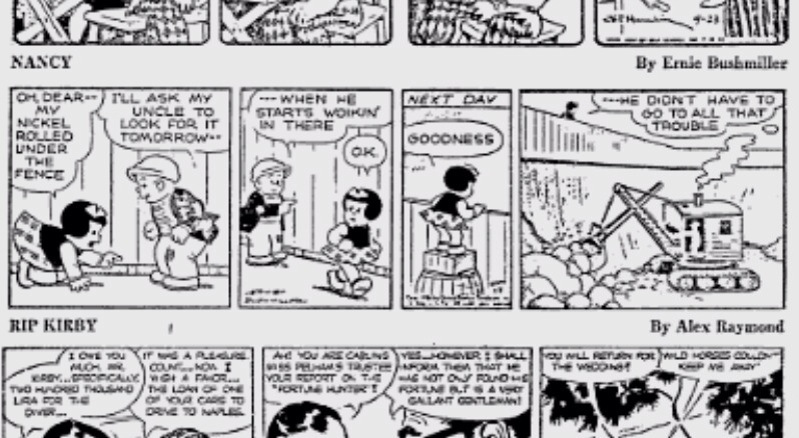 The people I know who are the biggest fans seem to most enjoy the concepts presented with certain Nancy strips which are so extremely simplified, innocent and naive that they end up appearing as rather profound philosophical statements and the similarly reductionist graphics which at times give a “deep” philosophical and/or psychedelic feel. And then of course there are those of us who are just nostalgic about anything we enjoyed when we were small children.

Well, that was a much less Polish newspaper than I expected.

Jimmy Hoffa rolled under that fence.

Nancy is an acquired taste. I didn’t think much of it when I was a kid; it was just there. Only after I got older and refined my tastes for the absurd did it start speaking to me. Three rocks!

The truth is, there was, and will ever be, only one Bushmiller.

Hmmm, I seem to remember the original quite differently, it was part of the strip’s well-known . . . experiments in form, shall we say, during the 1960s? Such heady times!

Of course, let’s not forget the best panel ever: 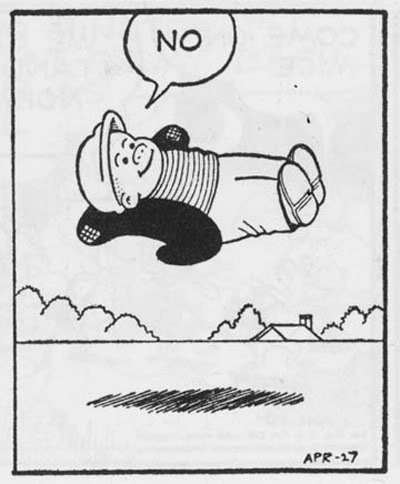 have you tried a library?

Yeah, you would think there must be thousands of microfilmed examples of the strip (from different syndicated papers) in various repositories, including public library systems.

Actually Rob had it right, but it turns out the last panel was missing too.

Or even originals, if you are lucky-- see Nicholson Baker. A boingboinger might even live near Duke University, and Baker’s newsprint archive.

What we’d need is a list of papers syndicating Nancy on that year. Then, even if we were limited to microfilm, we’d have a selection of microfilm copies to choose from.

Wow! What a blast from the past. Princess Sparkle Pony was hilarious during the Republican campaigns. I don’t know how or why I lost touch with his blogs but thanks for reminding me of his genius. I’ll be a regular reader again.

Damn! I should have thought to do that.

It took me years to break the habit of reading Nancy, a comic so stupid you can read it just by glancing in its general direction.

No way I’m going back now.

She was the original star of the strip, before her diminutive niece took over. The same thing happened with Barney Google (Snuffy Smith) and Thimble Theatre (Popeye), and more recently with Bloom County (Opus).

This is pinned to my wall at work.