I like it but I was kind of hoping it would work with my recycled glass bottle candle holders.

I’m confused about the end user. Either there’s power somewhere for the phone to connect to: cell towers, internet signals, something, where they can get power from somewhere, or there’s no power for anyone and having a charged phone isn’t going to help out.

I guess to let the kids watch downloaded movies?

Nah, you use the candle to power your ohone cos it’s handy to have the flashlight app working, obviously.

Seems elaborate when a simple handcrank will do:

It’s clearly so that you can access this during the coming nuclear apocalypse that will render solar panel chargers useless from all of the ash in the air: 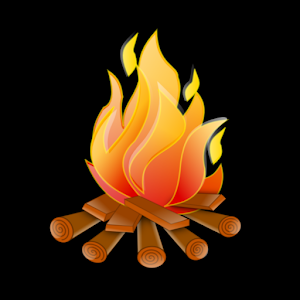 *** Survival Guide is completely based on the U.S. Military Survival Manual FM 21-76. ***Note: Ad Supported! For ad free version buy Survival Guide ProFeatures********- Zooming is supported in order to see the text/images better.- All the texts and illustrations can be read offline. No internet connection is needed. The internet connection is only used to display ads.Chapter 1: INTRODUCTION- Survival Actions- Pattern for SurvivalChapter 2: PSYCHOLOGY OF SURVIVAL- A Look at Stress- Natural Reacti...

Phones still go dead even though there’s a cell phone signal. The signal doesn’t power the phone. There’s power over Ethernet, but there’s no Tesla-style wireless power charging yet.

I do see a use for this. These days, I can’t simply leave for a weeklong camping trip without being absolutely deluged with email, and I will probably need to make a couple phone calls during that time as well. It’s not as easy or socially acceptable as it used to be to go completely incommunicado for an entire week. So, I will need my phone, but the phone is literally the only electronic device I’m using, so I’m not going to get an electrical hookup just for my phone. I suppose I could power the phone using the charger in my car, but that’s a bit of a kludge. Running an internal combustion engine for an hour just to juice up the phone? Come on. That’s a bit overkill and hardly environmentally conscious. The phone will run out of juice sometime during the duration of the trip even if I use it sparingly, so simply not charging the phone isn’t really an option.

It might do well with my hurricane/emergency cooking lantern. Just pop it on top to charge the phone while you get light during a power outage - or in a rustic cabin.

I spend a bunch of time in the mountains. sometimes, there is cell reception. Or maybe I just want to listen to a podcast, or use the GPS. If I am on an ATV, I can charge it with that. If I am in a wilderness area, I have to take horses, and they produce many things, but not 12v DC. i personally don’t think I want to pack a bunch of cans of sterno. I bring batteries, stored in several of these http://store.tripleaughtdesign.com/Battery-Case
I have looked at several of the heat-powered chargers. I will likely get one once I am convinced of power output and reliability, and the ability to use it with other heat sources, like a campfire.

Sorry for the implication that the tower powers the phone. But even in your case you could use a car inverter from the battery and keep it powered. Or turn it off when not in use.

ut even in your case you could use a car inverter from the battery and keep it powered.

A bit of a kludge. I would have to run the internal combustion engine or else risk draining the battery. I could do it, but there has to be a better way.

I have been in situations where some neighborhoods have lost power for days, but others had no power loss. This is another use case for the candle-powered phone charger.

LOL not how I go camping there isn’t.

For best efficiency, you need plenty of cold water…

I would be curious to know how quickly(if at all) concerns about efficiency would give way to concerns about product survival in the absence of water.

Bismuth Telluride is definitely the low-temperature material of choice; and depending on who you talk to hot-side operating temperatures up to around 320c seem to be available; though some weasel words about ‘intermittent’ vs. ‘continuous’ operation sometimes crop up; and modules that really would prefer you not go too much above 200-220 are quite common.

You’ll get best results with a nice healthy thermal delta; but if you accidentally let the water boil off/spill, I wonder if the housing can sink heat fast enough to save the device; or should you expect permanent failure, rather than just lousy efficiency, in short order?

Sorry for the implication that the tower powers the phone. But even in your case you could use a car inverter from the battery and keep it powered. Or turn it off when not in use.

I am routinely in situations where I have phone coverage but am more than a day’s walk from the nearest power source. I wouldn’t bother with this gadget [1], but portable off-grid power is a thing with genuine application.

[1] Because gadget + sufficient candles is likely to weigh much more than a backup battery or two; make one designed to run off a campfire and I’d be more interested.

I need to invent a crystal cell phone, like the crystal radio of my youth.

I was in NYC in the aftermath of Sandy. There was cell service everywhere but no one had power. Cellphones were literally lifelines, and people were charging them any way they could, including these heat converting gizmos.

What if it’s just a few blocks around your home that go black, but half a mile away, where there’s a cell tower, power is flowing just fine? Then you need juice locally to recharge your phone, so you can stay in touch using the WORKING tower.

This actually happened to me. An ice storm hit, and some areas had their power knocked out because the ice built up on the wires and broke them. But other areas weren’t as badly affected, and they didn’t lose power. I used a similar device by Stower, their original Flamestower, that uses a blade-type TEG to convert flame into electricity, putting the blade over the flame of an alcohol stove I was using to make coffee and heat food. That kept my phone topped up, which still could access the net and get phone calls via its radio link to the still-functioning tower nearby in a part of town that still had juice.

Stower makes one. It’s called the Flamestower, and has a blade you stick into the fire and a collapsible silicone tank on top for cold water. It works exactly like the Candle Stower, but lacks the stand and nifty diethylene glycol chafer-style fuel canister to run it. I got the Candle Stower (in addition to their first Flamestower) because I backed both projects on Kickstarter. I have a case of chafer fuel so I have a fuel source that won’t represent a fire hazard if spilled, because the diethylene glycol fuel will only burn in a wick; a puddle of spilled fuel will not ignite.