before anyone calls for the Pinkertons, their success rate at stopping train robberies wasn’t so great either. how about making it a federal crime, like robbing the mail? and attach some real jail time to it?

I kind of hate the quick narrative that comes up with these stories. “While criminals are being caught and arrested, charges are reduced to a misdemeanor or petty offense and the person is back on the streets in less than 24 hours after paying a nominal fine.” So they want people to be held indefinitely? Similar to homelessness, keep arresting them them until they get a job? I get that the idea is to make getting arrested and charged “inconvenient enough” that they do something more productive, but looking at incarceration stats in the US the approach isn’t working and isn’t a great use of resources.

I’d be really curious to see an in depth article about this. Is it organized or is it a crime of opportunity? What are they targeting and how are they selling it? Or is this just an evolution of crime reacting to direct-to-home shipping? Similar to how porch pirates weren’t a big thing a few decades ago. I’m sure previously train shipments were mostly bulk goods heading to stores and the “economics” of crime were different–which means the security was different.

Sadly, probably 75% of the payload was cheap junk.

I’d be really curious to see an in depth article about this. Is it organized or is it a crime of opportunity?

Here’s an LA Times article. Not sure if it’s as in-depth as what you want but it says there’s a mix of organized groups and random individuals.

It’s also not a brand new issue. It’s been ongoing for years, but may be a bit worse lately. 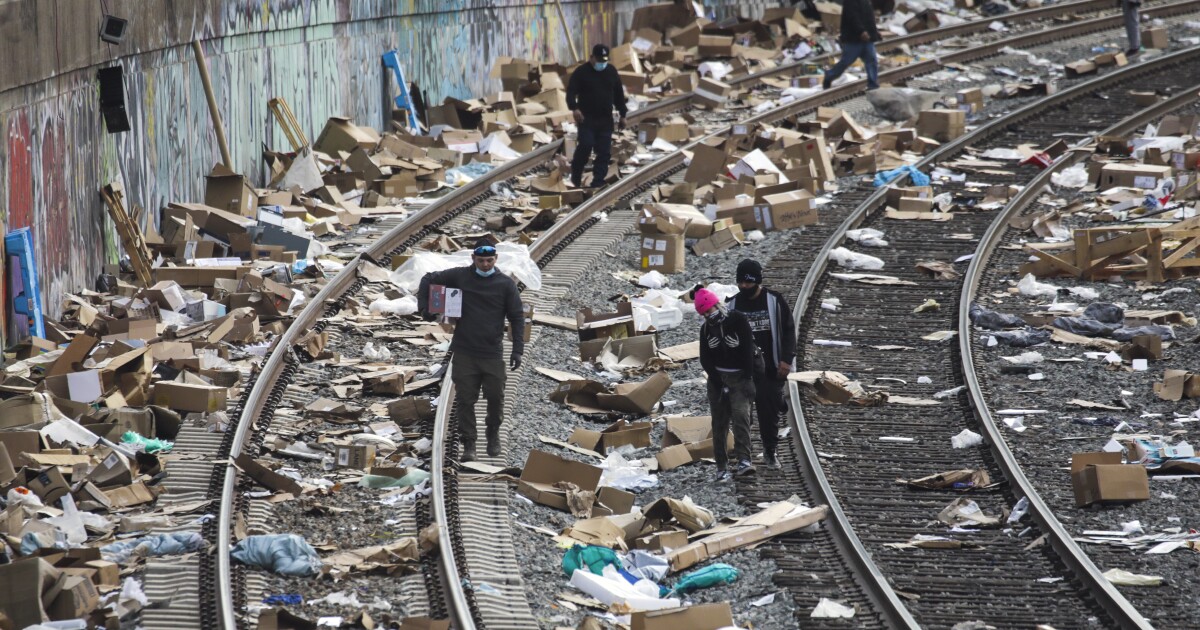 'It's ugly out there': Rail thefts leave tracks littered with pilfered packages

Thieves pilfering railroad cars is a crime that harks back to the days of horseback-riding bandits, but is fueled by a host of modern realities including homeless encampments and e-commerce.

Oh, so that’s where Christmas was hiding. /s

“While criminals are being caught and arrested, charges are reduced to a misdemeanor or petty offense and the person is back on the streets in less than 24 hours after paying a nominal fine.” So they want people to be held indefinitely?

Agreed that this seems to fit the crime. Still pissed after seeing similar charges for the majority of folks involved in an insurrection.

this just an evolution of crime

I see this as another example of rolling back the clock - something that shouldn’t happen, yet here we are. Remember how many in the GOP/GQP talked about bringing back the '50s? They meant the 1850s.

I hate this timeline.

LOS ANGELES (AP) — Crews made railroad repairs in Los Angeles Monday after a train derailed near the location where thieves have been raiding cargo containers , leaving the tracks littered with emptied boxes of packaged good sent by retailers.

The media, much like in the “shoplifting” stories that proved to be not as dramatic as they seemed, is carrying corporate water here. The train terminal could easily secure the premises against all but the most determined group of thieves, but that would cost money. And everyone knows you don’t spend money when you can just write things off with insurance claims and tax deductions.

This is a problem with an easy solution. There is no will on the part of those involved to perform the solution.

Yep, me too. Although I have to admit the things I’m waiting on aren’t life-essential, just life-easing.

“Clean up after yourself, ya filthy animal!” /s

So, as America does its re-make the 1930s we’re adding thieving hoboes to the show.

That’s just ignorance. Real hobos are migratory workers who often travel the rails, not thieves, and have a ethical code as spelled out in the 1889 National Hobo Convention. One of the rules is to respect local laws.

The National Hobo Convention is held on the second weekend of every August since 1900 in the town of Britt, Iowa, organized by the local Chamber of Commerce, and known throughout the town as the annual "Hobo Day" celebration. The National Hobo Convention is the largest gathering of hobos, rail-riders, and tramps, who gather to celebrate the American traveling worker. It's very important to define between hobos, tramps and bums as the hobos are sensitive to the titles. Hobos are workers who tr...

I haven’t seen any evidence that these package thieves ride the rails or travel at all. General proximity to railroad tracks does not a hobo make.

The train terminal could easily secure the premises against all but the most determined group of thieves, but that would cost money.

It’s not a terminal, but a section of line where trains stop often. Of course, the rubbish covering the tracks means that trains have to run even more slowly, making it easier for thieves to jump on and break into the containers. Reportedly there is a massive hole in the fence.

Container trains broken into in the US

An amazing video taken in Los Angles showing trackside littered with Amazon parcels stolen from passing container trains https://twitter.com/i/status/1481770722271760384 Keep hearing of train burglaries in LA on the scanner so went to...

Thank you. Having gotten to know a fair few in my own vagabonding days, I will always come to the defense of hobos.
They are just modern day, low-tech nomads, no need to vilify them. They are many of the people who harvest our seasonal crops! And they are the best to sit around a camp fire with.

I know that, just like I know that the old distinction between a hobo and a bum was that the former was willing to work while the latter was not. So I’ll plead guilty in the court of pendantry for trying to invoke a squalorous historical image around the railroad setting as the U.S. goes down the drain again.

And failing to examine the larger issues of justice in an unfettered capitalist system – a system which breeds crime due to ever-increasing wealth inequality, then asks us to clamp down on crime, but only that on the bottom rungs.

I’m not letting the thieves off the hook. But focusing only on enforcement and punishment will not solve the systemic problem.

There’s a scene in the Guy Pearce film “The Rover”, set in a post collapse Australia-- he pulls up to a RR crossing in the middle of the outback, and as the freight train goes by, every car has an armed, military-looking guard seated on top, all eyeballing him as it rolls by.

It’s interesting to consider a long slow fading of modern society rather than some Mad Max apocalyptic event.