China is selling "anti-pervert" flamethrowers that fit in a handbag

I suppose it says something that my first thought was “But why is the flame magenta?”

to attract the perverts to the flame part…they work kinda like bug zappers.

I wouldn’t bet on solder irons, but I would bet on butane lighters with a manufacturer error introducing an air intake into the flame.

The video shows an uncapped butane bottle sitting on the table, so yeah. But even as big as these are, I’m a little skeptical they’d last for 30 minutes on a single fill unless it’s dialed to the lowest setting.

Even so, if you point a large lit butane lighter at someone, they’re likely to bolt. To really hurt someone you’d have to hold it to them for at least a half-second or so, and that’s a long time for a panicked person to start running. If you held it right to them before you turned it on, you could probably deliver a mean burn, but if you really want to hurt someone instead of chase them away, a knife would probably prove much more effective. Even as hot as a butane flame can get, you can still wave your hand quickly through one, so you can likely knock this away fairly safely even if you swipe through the live flame.

On the one hand, this is a visually intimidating weapon. On the other hand, big butane torches have been available for over half a century, they just tend to be less discreetly shaped. On the gripping hand, most people who’ve bought them have some basic respect for fire safety.

I do not predict marketing big butane torches to the YouTube generation to end well for anyone. Not because I think they’ll manage to hurt each other, but because they’re likely to start a lot of unintended fires.

Now if you’ll excuse me, I need to grab my fire extinguisher and chase some kids off the lawn…

I suppose it says something that my first thought was “But why is the flame magenta?”

Probably because blue flames burn hotter and go through fuel faster. A yellow butane flame would be difficult if not impossible to project like that.

This seems just as intimidating as a knife, but a lot harder to control.

Actually, I suspect it’s more intimidating to most people but also ultimately less likely to successfully seriously burn skin directly. Catching clothes and nearby inanimate flammable objects on fire however, such as the inside of a train car full of commuters, seems rather likely. Mark my words, this will end in tragedy.

Only a matter of time now until this delightful non-lethal burns someone (attacker/owner/bystander/child who found it in a handbag/etc) to a very dead crisp. But hey, such is life.

Because it’s being marketed to women.

This seems just as intimidating as a knife, but a lot harder to control.

I think more intimidating. Humans have like an ingrained, “Oh fuck, its fire!” response in the back of their brain.

Well, yes. But blue == magenta. There is no temperature at which a black body, or a hydrocarbon flame, appears magenta. Which is what makes it even more ridiculous.

Either those flames in the picture are full of lithium ions, or they’ve been digitally coloured.

Because it’s being marketed to women.

I wonder if these would be a suitable defense against the moped knife gangs of England?
Seems like it might scare some people off.

So what’s wrong with a pepper spray? O wait, i get it. They were afraid of infringing patents.

A flamethrower-armed society is a polite society.

IMO the best option for this is a small air horn. Very loud, and almost useless to the pre-vert/criminal. And it’s under $10.
Toot that thing in a subway car, and that will end any unwanted interaction.

Either those flames in the picture are full of lithium ions, or they’ve been digitally coloured.

Or it’s a red/orange flame shot with the kind of crappy camera you can buy by for a few dollars from China’s cheaper manufacturers.

Can I solder with one of these?

Yes. If a couple of metal-heads are molesting you, you could fuse them together.

Tech-idea-wise, this provides further evidence that China sort of exists in its own Age of the Dinosaurs, with questionable designs popping up and then (for good reason) disappearing. I group the pocket flamethrower in with their ‘catamaran’ bus (pic below, but check out NPR on why this bus is going bust): 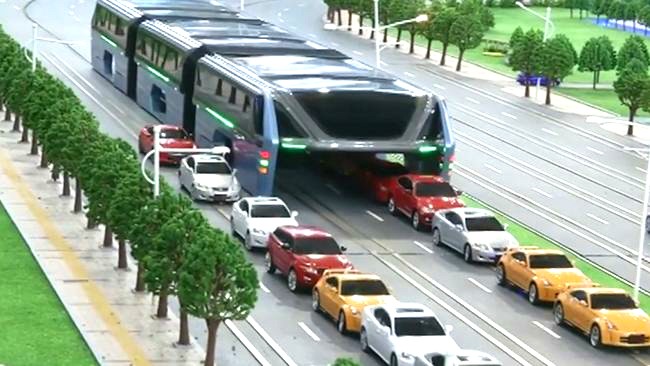 Seems more like a spot welder instead of a soldering iron.

Elegant weapon from a more civilized age my ass…

Funny, I just bought something very similar to this for lighting a BBQ grill.
Now l must check my wife’s purse?
https://www.amazon.com/Kitchen-Refillable-Lighters-Soldering-Topsense/dp/B01N6IT1QB/ref=sr_1_13_a_it?ie=UTF8&qid=1500495453&sr=8-13&keywords=blow+torch

i prefer to make a thermal lance out of spaghetti…

I saw a CGI video with those buses. They are made of a remarkable material that renders them very flexible when driving around corners.