The DeMoula’s / Market Basket situation is heating up further. Several thousand people rallied on behalf of the old management today.

The situation so far:

Amidst a family feud for control, the 51% owners fired the head of the company, who had grown said company by 350% to the #6 position on Consumer Reports ranking of 55 grocery chains. They called his fair wages, profit sharing plan, and refusal to load up on debt “reckless spending”. In his place, they installed the former president of Radio Shack on the promise of “increasing shareholder value”.

The employees have walked out in protest, demanding that the old CEO be reinstated. Not only have customers pledged their support, but so have the governor and senators from both NH and MA. Several organizers were summarily fired- Top employees with 2, 4, and almost 5 decades on the job in key positions.

This is a battle for the soul of capitalism.
On one side, someone who built a business and created wealth.
On the other, those who want to strip mine it for quick profits.
And as usual, the employees are their human shields. This time they’re fighting back.

PLEASE pay attention to this.

EDIT: Some more on this in this older thread.

The Once and Future Former President.

the 51% owners fired the head of the company, who had grown said company by 350% to the #6 position on Consumer Reports ranking of 55 grocery chains. They called his fair wages, profit sharing plan, and refusal to load up on debt “reckless spending”. In his place, they installed the former president of Radio Shack on the promise of “increasing shareholder value”.

Doesn’t this tell you everything you need to know?

I wouldn’t waste my breath appealing to reason with these pillaging scumbags; just go straight for the molotovs.

That’s fatcat for ‘using it to good effect on poor folks rather than wasting it on us’.

A recent update with photos of empty shelves and employee protest signs- Which are pretty f-ing ballsy for people who are still employed there.

They literally put a sign in an empty case saying “this never would have happened under the old management, here’s the phone number for the new guy if you want to complain”. 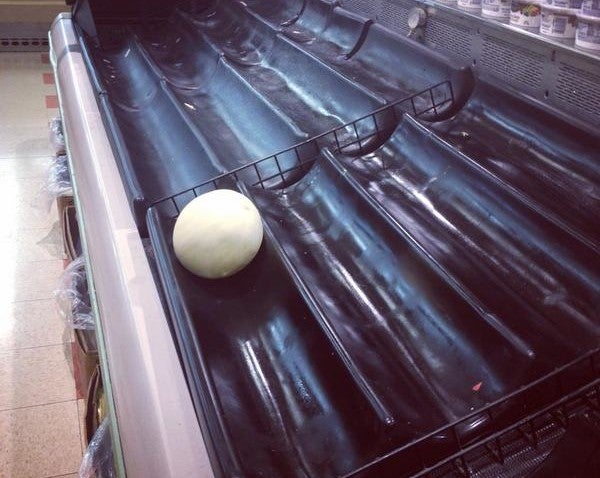 Even state politicians are taking sides as the standoff between Market Basket’s workers and new management continues.

And if you want the long, sordid backstory going all the way to 1916, here’s part one and part two, courtesy of the Clamsplainer. Seriously worth the read- especially the part where you find out what the “reckless spending” actually was: When the crash hit and the employee pension fund lost $40million+, Arthur T replaced it from the company profits.

I’ll keep trying to fill in with the latest updates.

The number of articles that are circulating right now are more than I can keep up with. There’s an opinion piece in the Boston Globe with a fantastic series of links. I stopped by two of the stores this morning on my way home. I’ll put up pictures later.

Doesn’t this tell you everything you need to know?

Yeah, he was hired to sail the ship directly into the ground.

Well, I was thinking a little broader than that; consider the agenda of these pin-striped scumbags.

Seems pretty obvious to me they’re working towards global slavery…

Well, yes, that would be the ultimate goal for plutocrats and oligarchs alike. I picture a future with a Walton vs. Koch land war in the central part of the US, as the .001% scrap amongst themselves after capitalism completely collapses due to no capital being available to generate economic activity. Just like the middle-ages, but without the patina of ‘divine right’.

Some nice local discussion about Market Basket in Somerville, MA.

Channel 7 news has evidence that the board was intending to sell the company.

Meanwhile, Arthur T has announced his own offer to purchase the half he doesn’t already control.

Full statement from Market Basket board regarding buyout, protests

Click to read a statement from the Market Basket Board of Directors.

If you think Rumsfeld, the Bushes and that whole corrupt ziggurat don’t believe they’re rich and powerful by divine right, I have a surprise for you.

Okay, the gauntlet has been seriously thrown down. 68 out of 71 store managers have pledged to quit unless Arthur T is reinstated or allowed to buy out the company. They expect for most of the assistant managers and department heads to sign on as well.

Also, here’s an excellent writeup that explains exactly what it is that is at stake here, and why I keep insisting that we are talking about the fundamental core of what capitalism is supposed to be.

I’m speaking of the historical claim, not the out-sized culture of entitlement that our so-called leaders live within. For the Bushes or Rumsfelds (or Cheney’s, for that matter) to believe they are descendant from Jesus is heresy in their professed religions.

Their actual religion: Because Fuck You, That’s Why

A fantastic inside look at the last few years on the board of directors.

The Boston Globe is also reporting that despite the board’s denial, Arthur T’s offer to buy the company is the only one being considered. 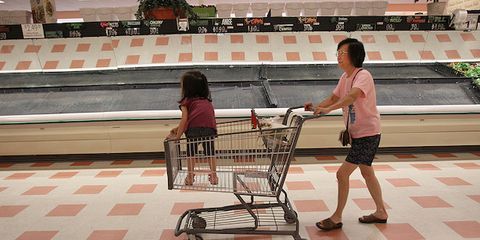 The Last Stand for the Middle Class Is Taking Place in a Parking Lot in...

One supermarket proved it can provide employees with a livable wage, annual bonuses, and a retirement plan. They can beat Walmart's prices. They can turn a profit, too. So why was its CEO just forced out?

Market Basket’s formula proves that executives and managers and cashiers can all profit, together. Employees get the benefits of a 15 percent profit sharing plan provided by Market Basket, while the groceries the store sells are less expensive, on average, than Walmart’s. As for the register: Market Basket rang in $4.6 billion in revenue last year, and is the 127th biggest privately owned company in America.

And it proves that none of this matters in the American economy if those at the top aren’t getting more than enough. Executive pay is the only beast America’s brand of the free market is designed to feed in 2014. CEOs made 331 times what an average worker made in 2013, and it’s clear that there will be no exceptions.

The American economy no longer exists to support a thriving middle class, or to help the weakest among us attain a livable wage for an honest day’s work. It is solely in existence to add to the pile of wealth for the unchecked at the top.