Their anti union stance killed any desire to shop there years ago, and the Amazon takeover didn’t bring me back. If this asshat thinks he’s been muzzled by leftist youth, let him rant away on truth social.

What stopped me after going to a whole Paycheck Foods just once was the prices.

And yeah, prices are also somewhat higher at my local co op, but at least my money isn’t going to Jeff Fucking Bezos.

This guy probably simultaneously complains about the kids not buying homes and cars because they’re buying too much avocado toast Asparagus Water.

The only thing he was muzzled by was his capitalistic greed, if he felt it was bad for business to voice his opinion that’s his choice.

And I feel like, you know, with the way freedom of speech is today, the movement on gun control, a lot of the liberties that I’ve taken for granted most of my life, I think, are under threat.

You “feel” like your liberties are under threat?? Oh, hun, you’ll know when you get under threat. Friggin white dudes with their hypothetical victim hood.

(Disclaimer: I am a friggin white dude)

asparagus water is a thing?!
and millenials won’t buy it? good for them!
sounds like someone from marketing went to the loo after eating a bunch of asparagus and thought, “what an odd aroma, i’ll bet we could sell that.”
no thank you.

And they grouse about millennials and avocado toast.

asparagus water is a thing?!

Right!? I had no idea this was a thing, just assumed it was a joke. Until I got to the photo. SIlliness.

Shorter version…“Get off my lawn, you young whippersnappers!”

6 posts were merged into an existing topic: Sunlight is the Best Disinfectant

“I believe in capitalism and the free market!”

The free market chooses not to buy your overpriced crap.

). These sorts of comments from their CEO – not to mention the acquisition by Amazon – seem well in line with expectations.

Or does he think the socialist left has taken over the military because they didn’t do enough to help El Dorito’s putsch?

Somehow, I am thinking the latter.

You know, I’m a capitalist at heart, and I believe in liberty and capitalism," he said. "Those are my twin values.

Translation: the most important thing to me is to be given the freedom to screw people over for money, and face zero consequence.

You can look forward to something that has been happening for decades?

They even applied a data-driven approach to predict the risk of their stores unionizing.

I believe in liberty and capitalism,"

These guys are only into their liberty, and the moment anyone else’s freedoms get in the way of their profit then freedom goes out the window. 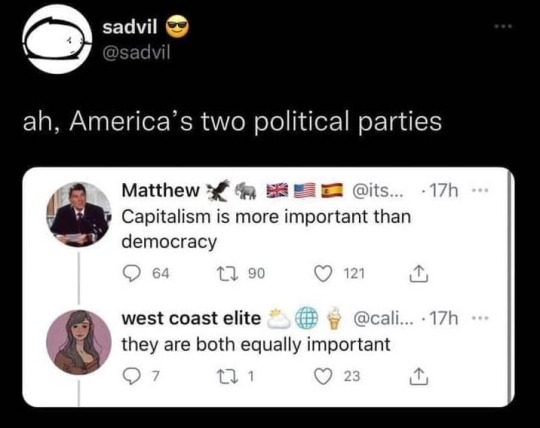 " …I believe in liberty and capitalism," he said. “Those are my twin values.”

“My board basically shut me down. It’s like a father, they started attacking the child, and I was intimidated enough to shut up,” Mackey told Reason.

For a guy who’s decrying the loss of “free speech,” it’s interesting that he was so willing to trade his for his fat paycheck.

You know, I’m a capitalist at heart, and I believe in liberty and capitalism," he said. "Those are my twin values.

Yes, we’re well aware that capitalists like the “freedom” to exploit workers and consumers with low wages and high prices. What you consider freedom is the freedom to abuse others without external regulation. That you balk when confronted with limits to your ability to abuse others and consider it censorship that other capitalists don’t find your sociopathic honesty refreshing is, sadly, not surprising at all.