Conservative Christian students at Liberty University are feeling the Bern

Easily a third of the Bible is about helping the poor. Not abortion. Not homosexuality. Helping the poor. Jesus went so far as to say when you help the poor, it’s as though you were helping him. And what Christian wouldn’t want to help Jesus? Yet it’s baffling how readily Christians hitch their wagon to the party that views the poor with such contempt. I just don’t understand how that disparity can possibly exist. It’s truly one of the great mysteries.

The audience broke out in energetic applause and whistles at several points during Sanders’ speech and the Q&A followup.

According to the account I read, the only cheering was for a moderator who asked a gotcha question about abortion. Sanders got a frosty reception - no surprise.

i heard that the reception was “quiet, but respectful” – it didn’t mention frosty. but yeah, the big applause was a gotcha question about abortion. i didn’t get to hear his answer to it, though.

No, I watched the whole video–there was clearly some response in the crowd. Obviously, many were not that enthused, but it was not ‘frosty’. People seemed to respect the fact that he was reaching out. It was actually a really good speech. This is how he carries his home state with a lot of rural conservative voters.

I’d like to see some conservatives step into liberal institutions and explain their views.

From the NPR coverage:

“Most of Sanders’ points got polite applause from the crowd, save for a group of louder outside supporters who were attending the event.”

I believe that’s the important distinction when it comes to judging the applause.

It’s not really that baffling, IMO. It’s easy to ignore the “help the poor” parts of the Bible and focus on the “OMG teh gayz!” part, because being outraged at homosexuals takes WAY less effort (and lets you keep more of your money) than helping the poor. And lots of humans, sadly enough, are greedy, selfish and lazy.

And let’s not forget John 12:8, “For the poor always ye have with you; but me ye have not always.” It’s a line–or at least the first part of it–I’ve often had quoted at me when I’ve asked why helping the poor isn’t a higher priority. I don’t think it means “don’t bother helping the poor”, but that seems to be how some people read it.

But the “help the poor” passages are very easy to understand, especially considering how often the message is repeated quite plainly, whereas the “OMG teh gayz!” passages are very few and mostly due to translation choices which make it seem like they say something they don’t. People actually have to work very hard to use the Bible to concentrate their hate on the people they want to hate.

People actually have to work very hard to use the Bible to concentrate their hate on the people they want to hate.

Except that really, most of the time they just say “but the Bible tells me so” without actually even knowing where in the Bible it says it. They just assume that it does. Very few Christians actually bother to read or try to understand the Bible in the first place - they just pick the things that they think it says, and then tell everyone that that is what it says.

And lots of humans, sadly enough, are greedy, selfish and lazy.

I don’t think it’s really about being greedy selfish and lazy. It’s more about living your life by looking to authority figures to tell you what to do. A lot of right wing religious types actually do go and help the poor, and they do care about other people. I don’t think it’s so much about it being easier to blame the gays than to help, so much as it is about it being easy for people with authority to maintain that authority through fear of an enemy.

I’ve had that a couple times. I often wonder what people’s Bibles would look like if they had the audacity to write their own versions like Jefferson did.

Lazarus was resurrected so old-school priests wanted to kill him because he evidenced Jesus’ divinity.

That’s a good point. There are people who do better in hierarchical formations – an exoskeleton instead of an internal one, in a way – but that doesn’t mean they aren’t good people or that they don’t do good things.

It’s true, but it does mean they are vulnerable to very bad people who are willing to do anything to climb to the top of that hierarchy, and that it is very hard to turn that ship around, since aggressive defense of leaders in place is another common trait in people who seek authority figures.

Who knows exactly how the applause broke down, but I know there’s a lot of footage there of xtian students sitting there with faces like smacked asses when he points out that America’s grotesque inequality is about as un-xtian as it gets.

Let’s be honest, these are kids who’ve chosen to attend a school not because it’s any good, but because it promises not to let them question the arbitrary beliefs their parents told them to have. I’m not convinced it’s useful to attempt dialogue with an audience like that, especially if it means you have to compromise yourself by flattering them as fair and open-minded thinkers.

I often wonder what people’s Bibles would look like if they had the audacity to write their own versions like Jefferson did.

Instead of Drunk History, we’d have Drunk Bible. Both of which would probably make more sense than the non-drunk versions.

For the poor always ye have with you; but me ye have not always

Our lecturer on John suggested that Jesus was being ironic - as so often he is - about the inability of people to fix the obvious problems of their society without having a prophet point them out. He says, in effect, “Well, you listen to prophets and you want to do what they tell you. So I’m telling you, helping the poor is doing what I want. If you want to impress me, that’s what you have to do.”

And the Bible is a very large work with a variable structure and that contains many contradictory statements. That’s why some Christians have explained to me that the only requirement of their faith is believing in Jesus Christ as their lord and savior. Through him they’re redeemed which is how they justify believing and even doing some pretty terrible things.

To be absolutely clear that’s only some Christians I’ve known. There have been many others who believe their faith holds them responsible for their actions, rather than this: 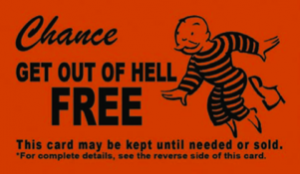 Who knows exactly how the applause broke down, but I know there’s a lot of footage there of xtian students sitting there with faces like smacked asses when he points out that America’s grotesque inequality is about as un-xtian as it gets.

A colleague decided to go into the ministry later in life, and went to theological college part time. He returned after the first week announcing that in the first lecture on the metaphorical and analogical significance of much of the Bible, some of his fellow students (evangelicals) burst into tears when they heard that practically nobody of any significance in the Anglican church had believed the literal story of Adam and Eve more or less since the mid-19th century, and that St. Augustine had very obviously had grave doubts about it. He wondered how many of them would last the course.