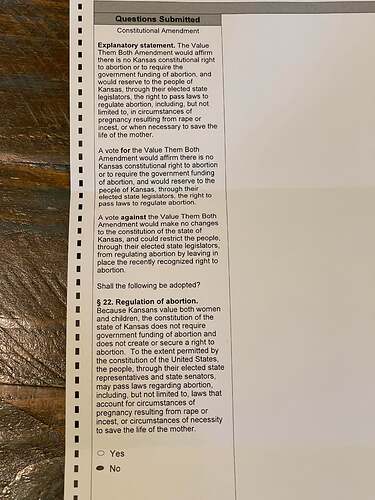 it’s a deep-red state that hasn’t sent a Democrat to congress since the 1930s.

This is not true. Sharice Davids represents Kansas’ 3rd District, which was also represented by Dennis Moore from 1999 to 2011. The 2nd District was also represented by Nancy Boyda from 2007 to 2009. Kansas has also had three Democratic governors this century (though one was a lieutenant governor who took over when Kathleen Sebelius was appointed to President Obama’s cabinet).

Kansas politics are not so cut and dry. A big part of the state’s population is part of the KC Metro area.

I saw that wording…that was obviously deliberately complicated. It has a string of negatives that cancel out.

Regarding how this victory was achieved…

GOTV, KISS, and call a lie a lie. That’s how you defeat Republicans.

Have the “election was rigged” claims started flowing yet? That seems to be the go-to claim for them when they’re losing.

I had heard that the wording was intentionally complicated and even misleading, but this is the first time I had seen it. Holy cow, talk about obfuscation. It says that it restricts the people from regulating abortion. WTF? It was the People that put the state constitution together, wasn’t it?

There were news stories showing people going door-to-door to ensure that voters understood what they were voting for/against. Glad that seemed to pay off.

This article details some of the other Republican fuckery that still failed to give the forced-birthers a win. 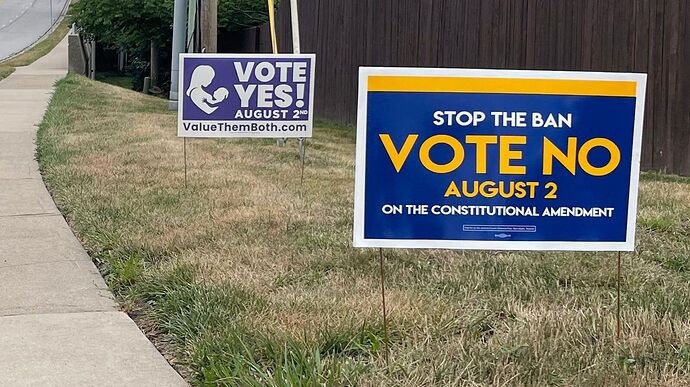 The outcome is a huge win for pro-choice advocates that will likely set the tone for what’s to come on abortion rights in a post-Roe America.

Republican lawmakers included the vote in a primary election, which usually has a lower turnout than the general election and skews conservative. Additionally, Kansas has closed primaries, which means unaffiliated voters are not used to voting in primaries. This gave Republicans in the state an advantage since about 44% of registered Kansas voters are Republicans, 26% are Democrats and 29% are unaffiliated.

Abortion rights advocates and lawmakers argued Republicans intentionally made the language of the amendment vague and confusing in order to mislead voters. The allegation from Democrats rang true after Kansas voters received a deceptive text message the night before the ballot vote, urging Kansans to vote yes on the amendment because it “will give women a choice” and “protect women’s health.”

Not yet, and, in fact, as @teknocholer pointed out above, the GOP tried like hell to rig this and still failed miserably. I suppose they could try to claim that so-called pro-life people got confused and voted no by mistake, but considering the language was made that way by “pro-life” Republicans, it’s going to be a hard sell.

It was the People that put the state constitution together, wasn’t it?

Technically, but it was a Kansas Supreme Court ruling that held that their constitution protects the right to an abortion. The language doing that isn’t explicitly in their constitution, it was just the interpretation of the justices. So, in order to pass any abortion restrictions above what Kansas law already has, they needed an Amendment that would allow the state legislature to further restrict abortion. In other words, had this amendment passed (and it’s awesome that it didn’t), the legislature would then have been free to pass a law banning abortion. The amendment itself wouldn’t have banned abortion.

Oh I’m sure they’ll try that. I just don’t think it’s going to work this time.

All in all, there have been a few very good centrist Repuplican folks in Kansas politics, like Nancy Kassebaum. Hell, even Bob Dole was a staunch supporter of welfare reforms and improvements, despite his flaws in other areas.

A Kansas sheriff is investigating claims of election fraud but evidence is...

A sheriff in the Kansas' largest county says he's investigating claims of election fraud — but hasn't provided evidence. This comes right as the state holds an referendum on abortion rights.

So relieved by this victory. I think the next challenge is getting voters to connect the Republican party with the loss of rights because many states won’t have ballot measures for limiting/abolishing abortion access. That party works so hard at screwing over its voting base, but its supporters don’t seem to connect their choice of representation to the horrible outcomes in policy.

The language doing that isn’t explicitly in their constitution, it was just the interpretation of the justices

§ 1. Equal rights. All men are possessed of equal and inalienable natural rights, among which are life, liberty, and the pursuit of happiness.

§ 2. Political power; privileges. All political power is inherent in the people, and all free governments are founded on their authority, and are instituted for their equal protection and benefit. No special privileges or immunities shall ever be granted by the legislature, which may not be altered, revoked or repealed by the same body; and this power shall be exercised by no other tribunal or agency

they point out that “men” should be applied to all people. and that “among” was deliberately chosen to show examples not limitations.

oto similar to the us constitution, the power to limit people’s rights is explicitly restricted.

bodily autonomy and medical rights are human rights and all their supreme court did was say: yes, they are.

The Kansas Supreme Court has ruled that the state’s constitution fundamentally protects abortion rights, blocking a state law that aimed to restrict a common procedure and declaring that Kansans have broad rights to control what happens to...

No, it’s their interpretation. Their constitution does not say, “The right to an abortion shall not be restricted” or anything anywhere close to that. That would be explicit language. They interpreted the language you pasted to include the right to an abortion, an interpretation I wholeheartedly agree with, and I am really glad they interpreted it that way. My only point was that their constitution does not explicitly grant that right. The right is implied. And this is an important distinction. Why? Because nothing currently prevents that court from reversing themselves in a future case. Just as Roe was overturned, that ruling could also be overturned. In fact, now that the attempt to amend their constitution has failed, I would bet the Kansas GOP will now try to pass a law banning abortion anyway so that they can take another run at the Kansas Supreme Court. I would say the Kansas legislature should try to enshrine the right to an abortion in law, but that legislature has a significant GOP majority, so that isn’t likely. Based on how easily the amendment attempt failed, though, I might suggest that the Kansas Democratic Party now try to enact a constitutional amendment explicitly protecting a woman’s right to an abortion.

In fact, now that the attempt to amend their constitution has failed, I would bet the Kansas GOP will now try to pass a law banning abortion anyway so that they can take another run at the Kansas Supreme Court

One advantage to having lost this vote is that if a law like that is passed then resulting argument before the Kansas Supreme Court will amount to “You said we can’t to this, the voting public said we can’t do this, but could you please let is ignore all that?”