I was in the Pacific Pinball Museum not long ago and got a side by side picture of two Williams machines from '73 and '91. 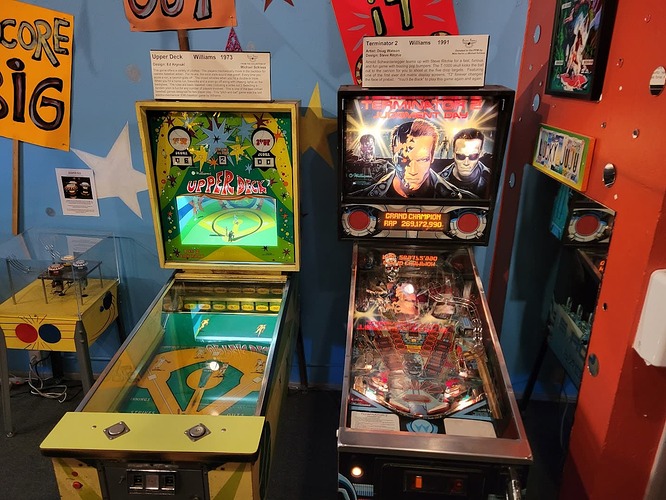 Modern pinball is incredible. Most people don’t get exposed to it much anymore because it’s rare to see them on location these days (bars, laundromats, etc). Location pinball is having a minor renaissance with gastropubs, retroarcades, etc, but the machines being designed now are mainly aimed at home users who have the money and space (a well equipped modern game ranges from $6000-$10000 in case you were wondering). The machines are absolutely stunning marvels though. Check out machines like the new Ghostbusters from Stern or any of the Jersey Jack games (which are all amazing).

That’s an odd comparison. Upper Deck was not a typical pinball machine from its era. It was a precision targeting game, free from all the rails, bumpers, and thumpers that commonly crowded the machines of the day. If two people wanted to argue about who was the more accurate shooter, this was the machine they could settle the argument with.

Otherwise, it was boring. Most of us kids wanted to play flashy games like Elton John and Tommy did.

That’s an odd comparison. Upper Deck was not a typical pinball machine from its era.

OK that makes a lot more sense. The note atop the machine didn’t say anything in that direction.

We’re lucky enough to have a good friend with seven machines in his game room (free play!), and the Savannah area is lighting up with arcades and small clusters in local bars.

I play pinball league at one of the many DC metro area locations, mostly in craft breweries, and have been involved with them since the late 90s. Stern is just cranking out releases, usually old properties or classic rock themed. Tried out the new Godzilla last week. Even old Williams/Ballys can get refreshed with a color DMD. Lots of enthusiasts in the region, so we have a continuous steam of new material in great condition. Can’t wait to see the Bond one!