You will NOT BE charged with fleeing if you are doing these things. You have the right to be safe!!!"

If the woman miscarries because of this, will the trooper be charged with manslaughter? Or is it the woman’s “fault?”

I just want to be clear about who’s held responsible for termination of pregnancies in red states.

Jesus fucking Christ, what is wrong with that guy? What if she had a kid in the car?? What if she slammed into another car too? He could have killed someone!

Fucker needs fired and charged with assault at the bare minimum.

It’s Arkansas. If she miscarries, they’ll convict her on a murder charge and execute her to prove how pro life they are.

What a shit show.

What an over-entitled a-hole!!! Shoot any jaywalkers lately, Big Man?

That aside, it’s quite an unreasonably assured claim, given that it’s predicting what cops will do in the field, which is often “ignore the law.” More accurate to say, “You won’t be convicted for doing what we’re telling you to do,” but even with that, there’s no guarantee.

Why do we pursue for anything less than felony infractions?!

Mail a ticket, and get on with it.

Man - the more I think about this, the more pissed I get.

I had a friend who worked with me at walmart get tailed by a cop with his lights on and he didn’t pull over for awhile because he was playing his music too loud to hear the sirens. Lights back then were not as bright). This guy would have run a 17 year old kid off the road!

I think this cop’s judgment is deeply broken. I also don’t think using “enjoys” in the headline advances the discussion.

I also don’t think using “enjoys” in the headline advances the discussion.

He didn’t do it out of necessity, and I didn’t see any indication he did it reluctantly. What does that leave?

What if she slammed into another car too? He could have killed someone!

Just have the DA blandly insist that the driver’s failure to stop as quickly as desired qualifies as a violation of AL Code § 32-5A-4 (2021) and that their violation is the ‘proximate case of the death’ and charge them with a felony.

The specifics vary by jurisdiction; but cases of playing high speed chase for deeply questionable reasons and then charging the driver when a passenger or bystander gets killed are relatively common. No reason to fret about the passengers being actual members of the public that you actually protected and served right into the ground when you can be protecting public safety in the vague general sense(according to your training and department procedures, as determined by internal affairs, naturally). I’d like to be joking; but I’m not, and neither are they.

Why do we pursue for anything less than felony infractions?!

Or not even felonies, but only when not pursuing is more of an immediate public harm than a worst-case high speed chase.

No one should be pitted for embezzlement, for example.

Do I really need to point out that there are more than three adverbs in the English language?

More accurate to say, “You won’t be convicted

so the cop website is making promises on behalf of the district attorney, not their own gun thugs

To be fairer, the right not to have your car flipped over for disrespecting authority is not written anywhere in the constitution… CHECKMATE /s

This was over two years ago, and is now making the rounds again because of the lawsuit. 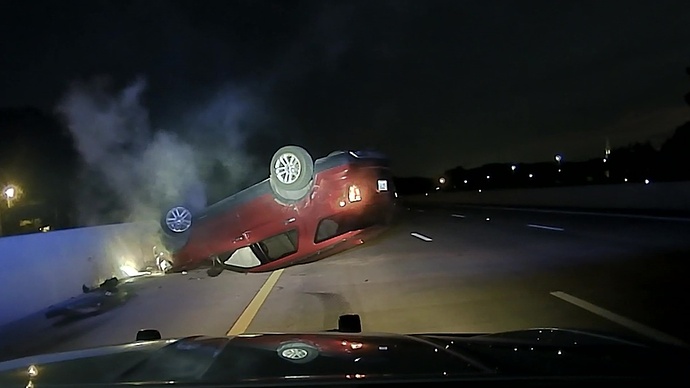 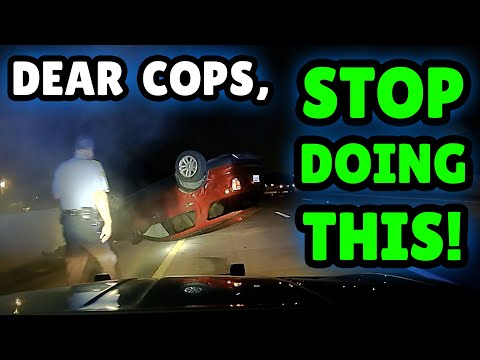 Jacksonville, Arkansas police officer Rodney Dunn rammed the car of a pregnant woman who was visibly looking for a safe place to exit the freeway, complying with his flashing lights. He is being su…