Cops shoot man, then interrupt his funeral to press his corpse's finger to his Iphone

So… the cops killed him, but didn’t bother to get a fingerprint off the body prior to the funeral service?

Like, you know, when the body was still in possession of the coroner, or even the funeral director’s?

What complete assholes; I hope the family sues the officers for inflicting additional emotional trauma. I guess the silver lining in this is that they still were not able to access the phone. 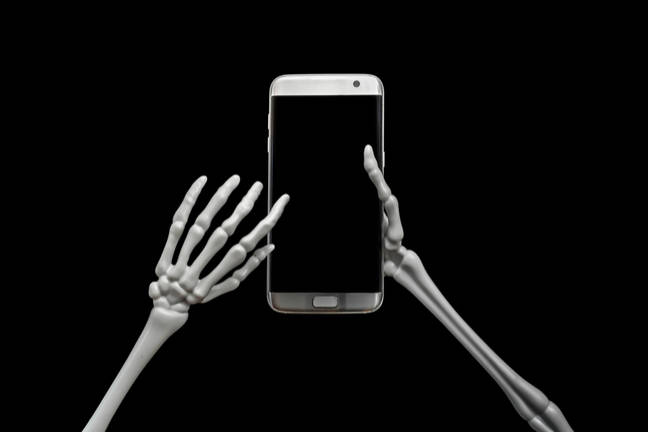 the cops killed him, but didn’t bother to get a fingerprint off the body prior to the funeral service?

Can you operate one of these fingerprint scanners with just a fingerprint? That’s the way it often worked in old movies, but I’ve not yet heard of someone doing that with a modern smartphone.

Can you operate one of these fingerprint scanners with just a fingerprint?

I’m no tech, but I think it’s not just the fingerprint; I think sensors in smartphones may register radio frequency or even body heat. That said, I know for a fact that iphones require an access code if more than 48 hours have passed since the last unlock.

All this served to do was make the officers involved look like ghoulish, incompetent dickheads.

while his family looked on in horror.

The early iPhone fingerprint proof of concept hacks used the fingerprint- I think there was some set up that made it work but did not involve the actual unlocking finger.

No idea if things have improved.

While the practice itself is repulsive, I’m intrigued by the legal/evidentiary aspect. If a body is released to the next of kin, doesn’t that make the deceased’s fingerprints their property? I mean, could the next of kin tell the cops to go get a warrant?

The family looked on in horror … because they knew the Apple iPhone only accepts fingerprints for the first 48 hours after being locked.

If a body is released to the next of kin, doesn’t that make the deceased’s fingerprints their property?

Gruesome impropriety aside, that’s the issue here; the authorities involved had already released the body out of their custody when they decided upon that ill-advised course of action.

Nowhere in the linked article was there any mention of a funeral being interrupted.

But there is an expectation of a body of a deceased loved one will not be deliberately mishandled. Giving rise to an instant cause of action for infliction of emotional distress for the surviving family. In fact it mishandling a body at a funeral home is a classic example used in law schools.

Nowhere in the linked article was there any mention of a funeral being interrupted.

Corey is prone to hyperbole; it is known.

Regardless whether the officers interrupted the actual service processional, it still remains a fact that they did this at the funeral home, after the body had been released, and in front of the deceased’s family.

Frankly, I hope it’s just clickbait; and that this failing of human decency did not take place during the actual service, as that’s even more disrespectful.

I think I remember seeing them on the same bill with Minutemen and Flipper.

Later, at his funeral, two Largo PD detectives walked into the funeral home and seized his corpse’s finger and mashed it against the phone they’d confiscated from his body after he was killed, while his family looked on in horror.

Based on the linked article this is completely inaccurate. This did not occur during his funeral nor was his family present. His fiancé was at the funeral home but it is unclear, and unlikely I think, she was in the room when the police were brought to the body.

It’s possible to use a copy of a fingerprint to open an Iphone, but it’s not easy - see below - and it’s unlikely that the cursory “investigation” done to legitimize the murder of a black man is going to have the budget or the time to invest in creating a fake finger for the unlocking.

Why I hacked TouchID (again) and still think it’s awesome

Last year, when the iPhone 5S was released, I showed how you could hack its fancy new TouchID fingerprint sensor. A year and one iPhone 6 later, I’ve done it again. When the iPhone 6 came out the first thing I wanted to find out was whether or not...

Or stupid, let’s not forget stupid.