Courts rule, again, that Duke Caboom is not Evel Knievel

If Duke Caboom is from Canada it’s obvious he’s a Super Dave homage.

I’m pretty sure I remember Knievel suing the makers of his own toy for a bigger share of the profits, too.

It’s clear at least that the toy Duke Caboom is parodying the rather disappointing Evel Knievel Stunt Cycle that many people such as myself who were children in the 1970s remember. 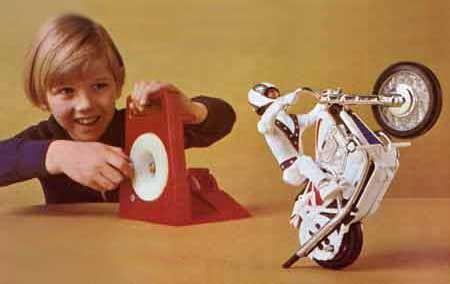 The History Of The Evel Knievel Stunt Cycle Toy Line!

Ideal Toy Company produced a series of Evel Knievel toys during the years of 1973 through 1977, that were designed by Joseph M. Burck.

Disappointing? I still have one.

I wanted the Evel Knievel Stunt Cycle badly. Then I got a knock-off for Christmas which used an air pump instead of spinning. I was very disappointed. About 10 years ago I checked to see how much they were on the internet and I found a few for $6. I didn’t get one - the time had passed.

I guess my experiences were much like those depicted in Toy Story 4 – I could never get the cycle to perform the stunts depicted in the commericals. But maybe that was my fault.

Evel barely stays on it, it is so much fun. I remember building ramps with yellow phone books and sending the bike on epic Evel-style jumps where the bike makes it and Evel is a broken mass.

Evel barely stays on it, it is so much fun. I remember building ramps with yellow phone books and sending the bike on epic Evel-style jumps where the bike makes it and Evel is a broken mass.

Kind of realistic for the actual Knievel, I suppose. The guy was hospitalized many times. Finally, in his later years he became a painter – a less dangerous pursuit.

It would also regularly career out of control, out of the room, and startle the dog, who hated the thing.

There aren’t enough of these. I loved his Letterman stuff, and didn’t realize, until after he passed, what a legendary comedian he was away and apart from his Letterman shtick.

Bob Einstein was comedy royalty. And Super Dave wouldn’t engage in a lawsuit like this because it sets a bad example for the kids.