Crowdfunding a major new critical study of Robert A Heinlein

I gave up on Heinlein when I tried reading his juvies to my kids for bedtime stories. I was confused, he was my most read author as an 8-10 year old. Reading is one thing, reading to an audience is another. Different circuits I guess. I think the 8-yr old me just glossed over the faults and riffed on the hard sci-fi bits. OTOH, I’ve found Clarke’s expository style, short stories esp., easier to read out loud; this is a matter of more exposition and less line-by-line dialogue, but also I find his work more interesting in general. Still dated, just not as badly.

I disagree that Heinlein was any kind of leftist or liberal in his later (Virginia) years. I think he was the fairly typical libertarian (with some exceptions) who didn’t realize (like most of them) that small, badly-funded governments lead to feudalism.

He did have some wonderful, forward-looking ideas, but some of his later characters I would love to just slap for their arrogance and egotism. But I imagine I would want to slap Heinlein too for the same reason.

Clarke and Asimov were less awful people than RAH, but their prose is pretty clunky as well.

Clarke could be lyrical, but was typically very cold and distant. Asimov was just clear, not stylistic at all, which to me is wonderful to read. No cobwebs. And his later books I think were very well written, although I guess I’m kind of a minority in that opinion.

And towards the very end of the “Golden Age”:
Brian Aldiss
J. G. Ballard

While I don’t expect anyone to agree with all of my choices, I’d be quite surprised if anyone tries to write them ALL off as writers of bad prose =).

@anon55609254: Asimov was a MUCH better writer of science fact than science fiction. Also, like many authors, his short stories were significantly better than his novels, on average. Given too many pages, Asimov will suck the very moisture from your brain; the “Foundation” series is a perfect example.

Asimov couldn’t create a believable character to save his life. At least Lazarus Long was way cool. Time enough for Love is great even though it’s a set of stories that are completely a justification for incest. I didn’t read it to my kids, and they would lose interest in the juvies when it got to the inevitable courtroom battle and Libertarian speeches.

Heh. Yeah, Heinlein riffed on incest over and over, especially in any story that had Lazarus Long in it.

Heinlein riffed on incest over and over, especially in any story that had Lazarus Long in it.

Counterpoint: Methuselah’s Children is full of Lazarus Long but contains no incest.

Prewar Heinlein was a very different writer than post war Heinlein. Part was because he was young and leftwing and married to a leftist woman back then. Part was because he was publishing in magazines edited by people who nixed any hint of sex or kinkiness, so he couldn’t indulge his inclinations and let it all hang out for the world to see**. This is also why his juveniles tend to be not horrible – the censorship enforced by his editor kept him from perving out. Look at his novels from the 50’s that were not juveniles and not initially published in a magazine (Door into Summer and The Puppet Masters) and you’ve got loads of creepy icky stuff, sex in Puppet Masters, and the crypto-pedophilic theme of Door into Summer.

** It is symbolically apt, as well as factually relevant, that Heinlein was a nudist.

Actually, Methuselah’s Children mentions incest quite a few times, towards the middle and end, and even includes an attempt at justification through the argument that the genetics aren’t THAT bad, if you bring in new blood every so often ^^’. Remember, also, that the Howard families often were heavily inbred (to maximize the life-extending properties of their genetics).

Still an excellent observation, though, on Heinlein’s influences =).

He keeps it on an intellectual level in MC, so the net effect isn’t squicky. In Time Enough for Love, he ditches theory and goes whole hog for praxis: squick ahoy!

Counterpoint: Methuselah’s Children is full of Lazarus Long but contains no incest.

Did you miss his banging his mother, among all the other permutations designed to defeat the classic taboo? I guess doing your own clone isn’t classic incest, but he had raised them as his children. Ick.

That I can agree with. I’m just noting the incest was there in Methuselah’s Children. If anything, it’s even MORE creepy to me, due to the pretty strong attempt at justification…

Still a good story, though, and furthermore, it was way more tightly-written than a lot of his later stuff. “Friday” was fun (again, in that skeevy, sexist, libertarian way) but lo-o-ong.

I feel about Heinlein much how I feel about John Ringo and some of the other “Sad/Rabid Puppies” (oy veh); awful politics and sometimes even awful people, but that doesn’t keep ‘em from rolling out a good tale, here and there ^^’. John Scalzi, while not of the “Puppy” ilk, is another author I enjoy who has STRONG libertarian leanings.

The only book I’ve ever actually hurled across a room was “The Cat Who Walks Through Walls”.

Cover: Lady in geisha makeup and a spacesuit, packing heat. Totally hot. OK, I’ll give it a shot.

First twenty pages: This is like an SF version of Buchan’s The Thirty Nine Steps. So far, so very good.

He could tell a good story. His juveniles inspired a couple generations of science and SF buffs.

You speak of Time enough for love, written when he was entering his dotage. I speak of Methusalahs children, a pre-war novel in which the Howard Families and Lazarus first appeared, and which is pretty much free of both sex and incest.

You speak of Time enough for love, written when he was entering his dotage. I speak of Methusalahs children, a pre-war novel in which the Howard Families and Lazarus first appeared, and which is pretty much free of both sex and incest.

Yes, I got turned around on the timeline. But speaking of timeline, it’s only prewar if you’re thinking of Vietnam. It’s 1958. According to wiki, (double checking my memory) there are no prewar novels, only a couple dozen stories.

Originally serialized in Astounding in 1941, and then revised and expanded for book publication in 1958. As stated on the Wikipedia bibliography page: 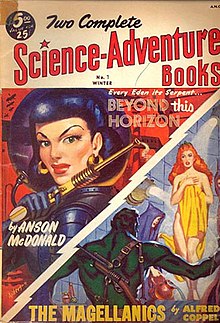 The science fiction writer Robert A. Heinlein (1907–1988) was productive during a writing career that spanned the last 49 years of his life; the Robert A. Heinlein bibliography includes 32 novels, 59 short stories and 16 collections published during his life. Four films, two TV series, several episodes of a radio series, and a board game derive more or less directly from his work. He wrote a screenplay for one of the films. Heinlein edited an anthology of other writers' SF short stories. Three n...

Note that Sixth Column was written to spec based on a racist premise by J W Campbell, and is very un-Heinlein in subject matter and structure (the fact that Heinlein says he worked hard to make it less racist is rather scary).

(eta: does it show that in junior high school, I had my Heinlein collection shelved chronologically?)

does it show that in junior high school, I had my Heinlein collection shelved chronologically?

Yes. Though counting the novella that was later expanded is definitely an asterix. I simply looked at the listing as I remembered from my paperback it wasn’t that early.

He liked cats, I’ll give him that.

I disagree that Heinlein was any kind of leftist or liberal in his later (Virginia) years.

You appear to be unaware of the difference between the ridiculous US misuse of liberal and the actual political Liberal. Do please look it up.

I think he was the fairly typical libertarian (with some exceptions) who didn’t realize (like most of them) that small, badly-funded governments lead to feudalism.

No, they lead to far worse than that; think more of the sort of totalitarianism that the right wing seems to want. Feudalism at least made a pretence of reciprocal obligations.

It never fails to amaze me how you mention the name “Heinlein” online and suddenly the web is full of hordes of yammerheads who can just barely write their own names but they “know” exactly how good or bad Heinlein was as a writer. They don’t know a participle from a particle accelerator but they “know” exactly how good or bad he was as a scientist. Their own ideas and thoughts about politics and foreign relations and race relations all came from high-on-pot sophomore year dorm room bullshit sessions and since then they’ve studied those topics less than they’ve studied how to download internet porn, but they “know” exactly what Heinlein thought about every political/social/racial issue known to man. The name “Heinlein” is a magic word that conjures forth endless streams of instant claimed expertise from people who have no talent, no imagination, no ability to comprehend mathematics or science or engineering or magic or history, and who not only will never be remembered for anything but in fact have already been forgotten by most people who ever knew them. Amazing.

Not a justication, an attempt to shock, to show that he could write about more “adult” subjects. You have to remember that Heinlein was born in 1907 right on the buckle of the Bible Belt, in Missouri. In his formative years, you heard people talking about incest less often then today you hear people talking about bestiality and taking drugs at the same time. In his youth it was literally unmentionable. In writing about it he was trying to give the finger to the people who said that “juveniles” were all he could really write. It wasn’t confession of interest, it was breaking what others said was his mold.