The image file is in Russia.

@mark – whipped this up, does the trick!

Well, this was a bad time to drop acid.

Hmm, not sure if they’re cheating by adding effects in post or it’s just some weird camera dynamic range mode, but the tops of the cubes are actually different colors!

Reminds me of this jigsaw puzzle my parents used to have.

Don’t think they ever completed it.

The image noise make it too easy to pick up and unusuall dark pixel. IF you copy a large block over, the illusion is proven (I think…)

the incantation for Mark is @frauenfelder, @mark is one of the lesser daemons : )

This is an image I whipped up myself in 3ds Max to illustrate the concept a few years back for art students. Our eyes often deceive us when it comes time to transcribe relative values, and it can be useful to use a viewfinder to get the “real” value of things when attempting to draw, paint, etc. from life.

I thought the first attempt was better. #2 the cubes all look the same gray to me. It’s not the same illusion: in the original, the dark bands of shadow lead our eyes to expect all the values to be darkened by the shadow, so the same absolute value reads as being lighter as a result. 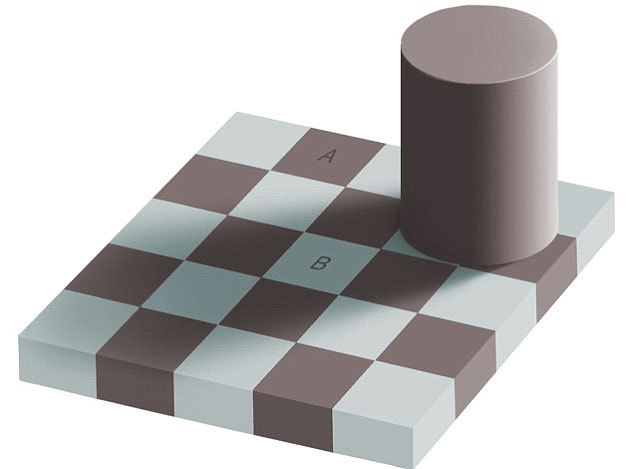 This is the sort of optical illusion that illustrates how good our eyes and brain are at building a model of a pattern in the face of severe non-uniformity of illumination. I think about this whenever I’m driving and following along on the lines on the roadway, considering how a computer could be programmed to extract the lane stripes from the road surface. Which is why they use Lidar in most computer-driven cars - the image mapping approach is rather tricky to implement.

FAKE. You can see the cut piece change shade as it passes over the graded background. This is CGI.

To be fair, this particular image contains the same value for squares A and B, but not the same hue. I think the image is a bit more effective when it’s desaturated.

Yeah I’m calling BS on this one. Or maybe the square is blue, I mean black, oh forget it.