{Silently mouths What The Fuck?}

Maybe cubing dogs will provide the economic stimulus required to drag Japan out of the recessionary doldrums.

This minecraft craze is out of control.

The natural progression from Bonzai Kittens.

Just to be clear, all of the hair pictured is held in place with copious quantities of some kind of fixative, and after a good bath they’d all look like any other dog, right? (If so, it doesn’t strike me as very comfortable for the dog either.)

The story is at least half wrong, and is probably bogus.

The Daily Mail covered this in late April. They showed some of the photos posted here and said that this was a practice in Taiwan: In a method reminiscent of Edward Scissorhands's trimming of a hedge, canine hairdressers in the Taiwanese capital Taipei are giving particularly furry customers outlandish makeovers.

I’m still looking into it but the Daily Mail connection makes me inclined to call BS.

Pretty sure those first two pictures were stuffed animals. There was a grooming competition where they used fake animals so that they could experiment freely (I think). http://www.sepia-pet.com/blogs/2012/12/20121.html

More dogs will fit in kennels, important in Tokyo. They will pack easier (no pun intended). 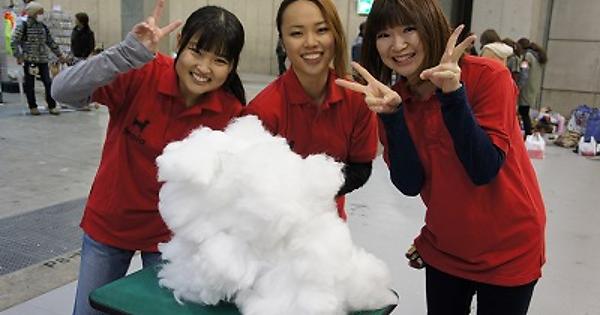 This is actually due to the Japanese Kei-class dog regulations. For space and environmental considerations, dogs must be shaped to fit into small spaces with as little wasteage as possible, to qualify for cheaper licensing and insurance rates.

(ETA: You BETTER have been making a dog-breeding joke, dammit, not putting ‘Make square dogs’ on your ‘todo’ list…)

They do - the sign under the fake dog being used to demonstrate this style simply says ‘Sebia Animal Institute Team A’, indicating this was for a competition or demonstration - as there is another fake dog in the background, groomed with different styling, one could infer that this was taken at a demonstration of skill or international styles.

It’s weird how, despite the fact that there’s a single photo on there that been taken in Japan (and it’s a fake dog at that) with two other photos that are from Taiwan (so far as I’ve been informed), people are both clutching onto their desire to go “ha ha weird Japan” as though a single photo makes an all-encompassing trend.

Perhaps this could signal the beginning of a new era of cultural exchange with Taiwan.

And it’s not as if extreme dog grooming isn’t already a thing elsewhere:
http://www.lostateminor.com/2014/03/22/photos-creative-weird-dog-grooming/

Seems plausible, Japan has done square fruits and stuff for a while

I read it as A-Team, which made me wonder if he pities the fool…