Not right, but understandable. Sad indeed.

You can look much closer to home to find an even sadder set of events. A driver who killed a 3 year old in Queens, NY was never prosecuted and even had his two traffic tickets quickly thrown out by Judge William Lee: http://gothamist.com/2014/11/19/judge_spent_47_seconds_tossing_out.php

Any word on whether the chair thrower got more than 120 hours of community service for his crimes? 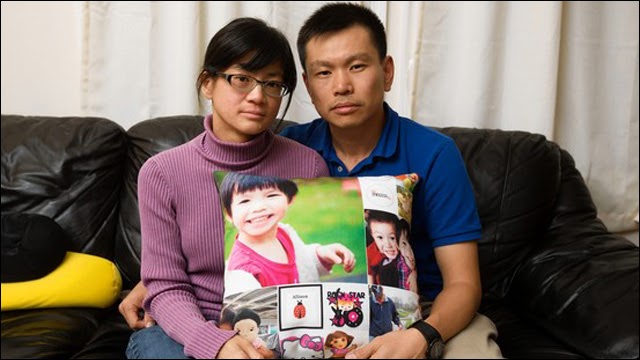 Who will answer for Allison Liao's death?

Driver was issued two tickets in the accident that killed a 3-year-old. The judge dismissed them in 47 seconds. How does this happen? Who...

This is probably getting less coverage because the parents are not violent, but it should be getting more, because the man who did it wasn’t formally charged, and was instead issued two tickets, both of which were suspended in a 47-second ruling by a judge at traffic court. That for what I think is vehicular manslaughter. What the eff.

It’s a bit of a red herring to focus on the 47-second verdict. Based on the evidence the DA had in hand (the guy had a green light, wasn’t speeding, wasn’t intoxicated, wasn’t on the phone), it didn’t look like the state could get a criminal conviction, so they dropped it. Obviously the defense agreed. So the judge instantly dismissed it, which he pretty much had to do. The step the victim’s family is now taking is to dispute the DA’s reasons for declining to prosecute, in order to force it into court. And who can blame them? It would be awful to see something like this summarily tossed aside.

Yeah, it’s fucking sad. But what was the judge supposed to do?

Maybe fifteen milliseconds. Possibly less. We can do actual math but there’s no common and agreed point of reference. Cutting three lives short (one of them extremely so) … there’s really no metric to compare having a chair thrown at you (more like in your general direction but with no expectation of making contact; yes, I watched the video: there was no chance that chair was going to hit) for rendering a callous, insulting, and heartless verdict.

People don’t take driving seriously enough. Every time you get behind the wheel you have the ability to transform lives for the worse, including your own. Piloting a 2,000 pound plus guided missile should require more training (in the US) than we currently require.

You do realise that the charge - the only one that the OM (the Dutch DA) used to show that the driver had been reckless and this was therefore a criminal act instead of an accident - of speeding could not be proven. So in effect the driver, who had an otherwise spotless record, lost control of his car and sadly hit three cyclists on a separate bike path.

So, what you are responding to are emotions (and possibly a lack of knowledge of this case Just like Rob showed). Most people would agree that a judge should not be guided by emotions but should apply the law in a rational way.

The judge actually took the unusual step to explain his verdict further on the website. You can find a Dutch version here

Sad story, but using an automated translation service is also very sad. This is my quick translation:

The father of a two-year-old girl who was killed last year at Meijel has hurled a chair towards the judge out of frustration.

The incident took place when the Roermond judge sentenced the causer of the accident, a 33-year-old Polish man, to 120 hours of community service. Check out the pictures filmed by regional TV station L1.

The chair landed on the floor right in front of the judge. The police removed the father from the courtroom.

The accident, during which the grandfather (67) and grandmother (64) of the child were also killed, happened last May in a gentle curve on the Heldense Dijk at Meijel.

The court considered it proven that the man lost control of his car, started to zigzag and ended up on the cycling track and drove the victims to death. The court did not consider it proven that he speeded excessively.

The prosecutor, who demanded a fifteen-month sentence two weeks ago, has appealed. He brandished the police report that allegedly shows that the man drove at 120 km/h at least. A maximum speed of 80 kilometers per hour applies locally.

On that last bit. The judge stated that the report by experts showed that the slight bend in the road could be taken at speeds of up to 130 km/h before a car would go off the road. The same report said that the car was doing between 76 km/h and 124 km/h which the judges found too broad too give a conclusive answer. Furthermore, to prove guilt and reckless driving the speed limit needs to have been exceeded quite a bit (quoth the judge). So driving 90 where 80 is allowed is probably not enough.

All that being said, I can totally understand the father’s anger.

Piloting a 2,000 pound plus guided missile should require more training (in the US) than we currently require

But if we required that what would be incentive to build smarter, safer cars? (Or more idiot proof ones…) In seriousness though I agree completely. I love driving, but sometimes the lack of engagement by other drivers is infuriating. I do think stricter testing to get a license would help, but really more education about cars in general would be nice. I’m betting a good percentage of the population would have a hard time changing their own tire, even with the help of the owners manual.

There’s nothing we do that kills more of our family and friends than driving our cars. Nothing else comes close. Yet we are still quite happy to:

The judge has declined to enter a complaint against the father, so he won’t be prosecuted. The court has also posted an explanation of the judgement:

Or the machine translation:
https://translate.google.com/translate?sl=nl&tl=en&u=http%3A%2F%2Fwww.rechtspraak.nl%2FOrganisatie%2FRechtbanken%2FLimburg%2FNieuws%2FPages%2F4-vragen-en-antwoorden-over-het-vonnis-in-de-zaak-Meijel.aspx

3 for me is a big sticking point. I’ve pulled the handbrake on drivers in order to get out when they start texting and driving. The explanation I usually give is: “If you value a quick reply on your phone more than the sum of your and my life, then I’m never riding with you again.” Then they usually call me an asshole and tell me to get back in the car. Then I give them the ultimatum that I’ll get back in if they let me hold onto their phone the rest of the way. I’ve had to walk a lot of miles in the dark and the rain. But Hey, I’m not brain damaged from the front end of the car I’m in getting wrapped around a telephone pole.

I’m just brain damaged from the drugs I took when I was younger and stupider.

Terrible. Just as bad is the writing about of this article. I expect more from BoingBoing. I guess proof reading is over rated.
“A judge failed to throw to book at a driver who killed a child, so the child’s father threw a chair at her.”

Yikes. As far as the subject matter is concerned, I feel for the father. I’d have done more than throw a chair. Emotion would get the best of me, because ITS MY FAMILY THAT WAS KILLED. The driver should stay clear of me or I’ll exact revenge. I’m not saying I’m right, but im honest.

Just as bad is the writing about of this article.

Yeah, the writing about of it is terrible.

Tip: never pull the handbrake on a driving car…

It’s okay to not be cool with drivers texting and it’s normal to demand to get out, but pulling the handbrake can cause the car to go out of control and cause deadly accidents.