I’m glad you explained it because I thought it was a person smoking a pipe.

Does anyone know if the dash cam video was shown to the jury?

Yes, they saw this and the Facebook video as a part of the trial, and repeatedly during deliberations.

I seriously don’t understand how a jury found him not guilty. This seems lake a pretty straightforward case.

The jury pool was given an extensive questionare. With this information I suppose the defense managed to weed out individuals with… shall we say… open minds.

Here’s the problem, though: he didn’t identify that he had a permit.

I’m sure Mr. Castile might have gotten around to that little detail if he had not been immediately killed.

He fired his weapon within seconds of hearing he had a firearm with him. He never asked for any clarifying information. What you are saying here makes no sense whatsoever.

Mistakes or not the exact same scenario in the state of Michigan with a white guy I know resulted in friendly banter.

Difference: benefit of the doubt.

“Both partners are very invested in some very intense sex,” he says. “There’s not a whole lot of perks that come with this job. You find one, relax and enjoy it.”

What the fucking fuck?

There were mistakes made on both sides

Castile didn’t say exactly the right words black men have to say in order not to get murdered?

What you are saying here makes no sense whatsoever.

If police are not held accountable then they will continue to do as they will.

The “protecting the child from marijuana smoke” defense is bogus when you consider that if he’d been smoking a huge stogie, producing a lot more smoke, the cop wouldn’t have cared about the child’s lungs.

What was Castile’s “mistake”?

hear, hear. and the folks who trained him – that “Bulletproof Warrior" class – and the individuals who endorsed it at the police department should all face civil rights violations.

that someone was trained to act like this should be criminal.

Shoulda coulda but but but, what if the officer really really wanted some of that great sex as promised during training?

My brother is a cop, and doesn’t defend “thin blue line” behavior. I have been flamed here before for it (and am sure I will shortly as well), but perhaps the narrative you have heard is not broadly true.

The “bulletproof warrior” thing is a direct quote from police training materials. 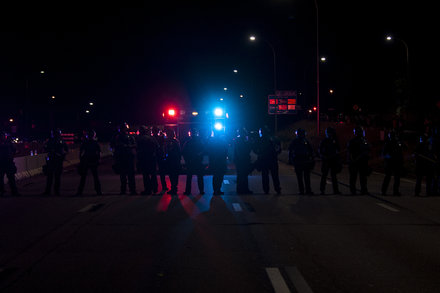 Critics say its teachings run counter to the reforms that police departments should adopt if they are to win back community trust, especially among black residents.

I too am lost for words.

What’s even more bogus is the line of logic.

There were mistakes made on both sides

Castile didn’t say exactly the right words black men have to say in order not to get murdered?