Defector draws the tortures North Koreans are subjected to

Time to balloon-drop fifty million DVDs of South Korean soap operas. They can’t fit everybody in a prison camp!

At this point the entire country is already a prison camp. Sure they can make it even worse (regular prisons have “the hole” or something similar), but even citizens in good standing are basically prisoners of their country.

But again, the question is: What can we do about it? The North Korean regime is so insular that sanctions are basically useless. A full on military invasion is a nightmare scenario. Nuking Pyongyang would be monstrous and quite possibly ineffective.

Most of the world has no leverage on the North Korean leadership, nor any reasonable fallback option. There is literally no good solution.

I agree. The entire country has been geared toward regime preservation. They have an apocalyptic mindset that makes any appeal to reason difficult.

But I was only half joking about the DVDs. The Iron Curtain rusted through in part because smuggled VHS tapes showed the people of the Soviet satellite countries that they were living a lie.

There are an increasing number of computers and DVD players in civilian hands in the DPRK. That is an opening. The cost of fifty million DVDs, or twenty million thumb drives, would be a trifle compared to the cost of a military effort.

Why not good old fashioned pamphlets?

You have to counter over 60 years of propaganda from their own government though, which is a monumental task.

The problem with the DPRK is that they’re nuclear. If the citizens revolt, or if essentially anything happens that would topple the regime, there’s nothing in place to prevent them from nuking Seoul. They can probably also reach all of Japan as well as Beijing, Hong Kong, etc. In addition, they are always in a state of preparedness – they don’t have anything else to do but military drills.

It doesn’t help that China keeps funneling goods to them. I think any serious action needs to start with China.

Ah, the perfected model to which my government so clearly aspires. In fact I recognize that drawing - it’s one of the techniques used at Bagram, on known innocent victims.

Time for Propaganda Minister Rodman to put the spin in full gear.

I’m actually a little less concerned about the DPRK nuclear threat than most people. I suspect it is mostly for show and that an attempted nuclear strike would probably fail for one of a billion different reasons (old and poorly maintained rocket fails, detonating system can’t handle the stresses of launch, improperly designed warhead fails to set up the critical chain reaction). That said, any military option with North Korea is going to be a bloody ugly mess.

Even if you do topple the regime without totally destroying the country, you have to figure out some way to set up a government that is both effective and not staffed by the same stooges that have been running the country into the ground for half a century now. It’s Afghanistan with more brainwashing. It would take decades of concerted effort from the outside to turn the country around, and for what? It’s not like North Korea has massive oil reserves or something. It’s really hard to justify spending trillions of dollars for the human rights of non-citizens, sad to say.

It doesn’t help that China keeps funneling goods to them. I think any serious action needs to start with China.

As tempting as it is to finger point at China, I don’t think that they are fully the bad guys in this instance. I think South Korea is only slightly more interested in a united Korea than China. The consequences of a collapsing North Korea are dire for both South Korea and China. South Korea has to worry about a military conflict that will take place within artillery range of half their population and a huge portion of their economic infrastructure, and China would be facing a few million starving Koreans pouring over the border into already unstable regions of their nation. Sure, China fears a united Korea, but so does South Korea. South Korea unifying with North Korea would be like the US trying to merge with Mexico if Mexico was as poor as Somalia.

The reunification of Germany isn’t even on the same scale. West Germany was vastly richer than East Germany, but East Germany had infrastructure that was at least within a couple of decades as West Germany. Their cultures had diverged somewhat, but not all that much in the grand scheme of things. North Korean culture is frankly alien to South Korea now, and the wealth disparity is literally as vast as it is possible to have. North Korea is the poorest nation in the world, while South Korea is a first world power.

People who point out that there is nothing to do have it right. The best you can hope for is a leader with some linger wafting of a soul decides to unify in return for piles of cash, and that the transition is managed from both ends peacefully. I wouldn’t hold my breath.

@jandrese they already do all of these things and have for a while. The hope is that the balloons fall into the hands of the soldiers who have the power (and weapons) to revolt. 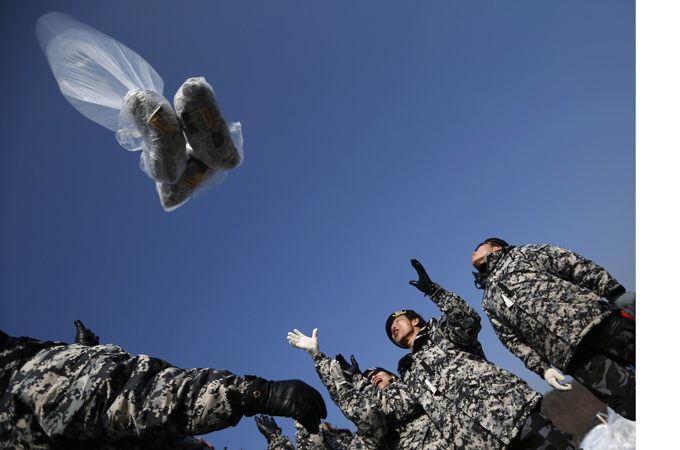 Have you read that report? I had a browse through the first 60 pages or so last night. I learnt that North Korea has prison camps that span hundreds of square kilometres. The leadership of the country is degenerate and purposeless. They spent $200M building statues of the Kims? Apple computer has a net income larger than the GDP of North Korea, but Apple has only about 80,000 employees, compared to the 24 million people living in North Korea. The CEO of Oracle has a personal salary equivalent to about 1% of North Korea’s GDP.

I don’t know how to go about fixing the situation. edit: How about translating the document into Korean and distributing it in North Korea?

Time to balloon-drop fifty million DVDs of South Korean soap operas. They can’t fit everybody in a prison camp!

So there seems to be a big push from a high level just now to raise awareness of North Korean atrocities, and I’m kind of wondering what the justification is. I mean, we all know nobody’s going to do shit for these people. North Korean artillery threatens too many South Korean civilians, and (more importantly) feeding 25 million helpless refugees is hard and we don’t wanna. We’re just gonna keep wringing our hands and saying “oh, what a shame” and letting it happen. So who’s gaining, politically, by this new effort?

Good point, but a fair minority of the population, what might be called the “Outer Party,” have electricity, TVs, and even DVD players.

These are exactly the kind of people who would do the most damage if they became disaffected.

I agree, but do you contest the accuracy of the statements in that document? More importantly, does North Korea contest it? Has North Korea made any official statement to refute the accusations? I think there’s too much detail and too many references to the public record for that report to have been fabricated.

The system there is broken, to the point that Kim Jung Un had to execute his uncle, whose trade role with China gave him enough access to resources to appear to be (or to actually be) a threat.

How could we create a framework that would facilitate a peaceful change? From a purely pragmatic perspective, the west has no interest in invasion of North Korea - their resources don’t justify the effort, and an invasion of North Korea would result in US / Western forces on the doorstep of China, which would be bad for international relationships that do we care about. It’s easier for everyone to ignore what is happening in North Korea, because to tackle the problem would release millions of refugees to impoverish China and South Korea.

What we actually need is an agreement between China, Russia, Japan, South Korea and the USA as to how to handle a potential collapse of North Korea in a way that minimises the loss of life, e.g. each country agrees to provide food for a period of five years to 6 million of the population, and the space to allow some kind of non-psychotic government to emerge amongst the North Koreans.

It might be better if a democratic nation emerged in North Korea, but even a caretaker communist regime that actually focussed on improving the lot of the people would be a vast improvement, versus the paranoid system that’s reported by the UN. North Korea is still an echo of Russia under Stalin, or China under Mao.

It´s not exactly Afghanistan I think. I don´t really know what kind of education Afghani citizens have on average, but in NK there´s supposedly a lot of people with a useful education.
Koreans are a very determined people, just look at how South Korea has transformed itself over 50 years. If anyone can rebuild a united Korea, the Koreans can. Also, with all the hostility, there is still a sense of community among Koreans of the North and the South, although with the last generation to know a united Korea getting old and dying, that may disappear quickly.

I´m no military expert, but as far as I´m informed, the nuclear capabilities of NK have not yet reached the point where the can launch nuclear warheads, but who knows. The other problem lies with the fact that Seoul is situated within range of NK artillery that is positioned all along the border, so in case of a war, Seoul would be hit hard.

Yet another aspect of the problem is that neither China nor the U.S. have a real interest in Korean unification. Politically, they profit much more from a NK leadership dependent on China and South Korea and Japan dependent on the U.S. in turn.

Yeah, I skimmed over the comments over at The Atlantic and was surprised that no one was pointing out that these sound just like “stress positions”, perfectly fair game as part of “enhanced interrogation”. I sure wish we in the US had a stronger moral leg to stand on to condemn these practices. But we don’t.