Detailed maps of the Overlook Hotel, from The Shining

So much of what shows up as “odd” in these kinds of analysis is really true of just about any film, and is mostly a by-product of the way in which films (and TV) are made. For example, the Brandy Bunch house exterior doesn’t have a second floor, but the interior features a big staircase. This isn’t design to disorient you, it’s just an artifact of filming and exterior which has nothing to do with the set built on a sound stage. Things in the Shining like the interviewer’s office having a window despite the room which they walk into not possibly having one is just the same as the Brady Bunch.

THREE floors! The attic is converted into bedrooms.

Mapping these sets is made easier by the long, unbroken shots that were used in older movies in general, and by Kubrick in particular. Whenever I watch an old classic I’m always struck by how it doesn’t jump around with all the cuts that a modern movie would insert. They would let scenes breath.

My favorite little oddness is that in an overhead shot of the hotel, there is absolutely no hint of a hedge maze. Also, I tend to suspect that Kubrick pretty much know what he was doing and that the hotel was designed to be impossible while seeming to be normal.

Kubrick pretty much knew what he was doing

Yeah, but perhaps he also did not care as much about geographical continuity as he did about composition and mood.

The film nerd in me is annoyed that the author uses “green screen” to refer to scenes that were probably filmed with rear projection. 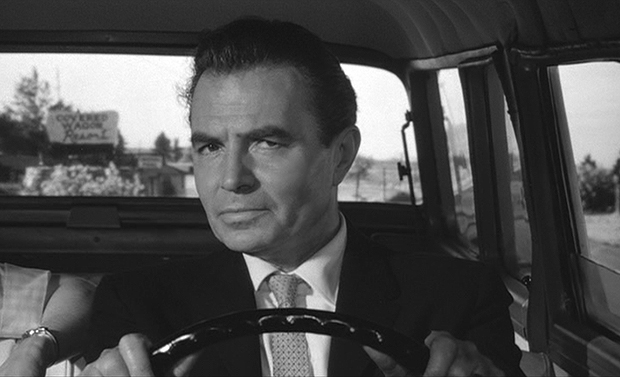 Determining the location of Kubrick's green screen location of Piedmont, South Dakota in 'Lolita' and examination of puropse.

I realized all such efforts were hopeless quite recently. There was an article about various things in SF movies that couldn’t be squared away, even with the basic SF assumed technology. One writer responded, “Look, I want to tell an adventure tale about somebody going into the past and experiencing another time. I’ve got no interest in the Structure Of The Timestream or any of that, and the adventure won’t involve killing his grandfather.” The article pointed out that one of the most popular, beloved, entertaining stories was “Back to the Future”, which actually had Marty seeing his own body fade away, a device to indicate the stakes and the urgency (imagine your sense of panic)…but it’s really, really crazy as SF.

A lot of writing, especially of fantastic fiction, is like a dream or nightmare: there you are in this situation; there’s no explanation for why you are naked in front of your English class, you just are, and the story is about how you deal with the situation. It’s not about how the situation came to be.

For fans of The Shining, the hotel—the exterior, anyway—is a real, honest-to-goodness hotel, and you can stay there. It’s in Oregon, east of Portland, and not in Colorado, and the interior is (thankfully) nothing like what you see in the movie. (And therefore, you’ll be able to actually get to sleep.) The hotel is the Timberline Lodge on Mount Hood. I’ve stayed there twice, and it’s great—and yeah, standing outside, it’s creepy as hell. It looks exactly like it does in the film, except that there’s no maze.