Did a pro cyclist hide a motor inside her bike?

So, I’m curious as what inspired the inspection in the first place. It doesn’t sound random, though I guess it could have been.

Has the “friend” given any explanation for using that specific motor? There are many, many bike-assist motors available, but I’ve never seen one like that, which does seem to imply that it was custom-built for nefarious purposes.

Or, in this string of coincidences, the friend just happened to be testing out a brand-new design of motor.

“To me, the UCI are not testing properly. If they are, they need to put their money where their mouth is and buy the equipment that can really test the bikes.

“They need to have thermal imaging guns [to pick up the heat motors generate – ed.] That will help. They also need to use an x-ray scanner. After last year’s Tour I researched this myself and contacted a company.

“Through that contact, I have located a portable machine that costs about a million and a half dollars. All you have to do is pass every bike through it. It will detect everything – it will find things hidden in frames, rims, everywhere.

“That scanning should be carried out on all the Grand Tours and in other major events.”

No need to do much in the way of calculations, the spec of the motor system that’s almost certainly being used is here: http://www.vivax-assist.com/en/produkte/vivax-assist-4-0/vivax-assist_4-0.html

Depending on the battery you choose, you get an extra 200 Watts for 60 or 90 minutes. An elite male cyclo-cross race is only 60 minutes long (plus a lap); the under-23 women’s race that Femke van den Driessche was competing in lasted just 41 minutes.

An elite male road cyclist is usually capable of putting out a bit over 400 Watts for 30 minutes, known as the threshold power. Elite female cyclists have threshold power around 220-250 Watts.

Being able to boost that by 200 Watts when it’s needed is an advantage that far outweighs the weight penalty, especially in a race as short as a cyclo-cross event.

In a road race, the rider spends most of his or her time riding in a group at a fairly low power output. Their threshold power only comes into play when they’re attempting to break away from the group or attacking on a climb; in general climbs are where races are won. being able to call on an extra 200 Watts on a race’s crucial climb would also be a huge advantage.

This is why the rules don’t require a rider to have been actually caught riding a motorised bike. The bike van den Driessche has been pinged for was found in the pit area manned by her support team. I haven’t seen any suggestion she used it, but that doesn’t matter; the rules clearly make this a ‘strict liability’ offence.

A minx through & through.

It’s actually much simpler to detect these motors. All electric motors contain powerfult magnets, so all you need is a magnetometer. It’s especially obvious to find these motors in race bikes this way because the frames are all carbon fiber or titanium rather than steel.

is it fair to say that your laws are batshit crazy?

(I’m sure Europe and Germany have similar braindead rules, but I learnt to live around them)

How much energy can you fit in lithium in the frame tube anyway? I can see that it would be enough to give an edge, but compared to the energy the cyclist puts into the bike over the course of a race it seems like it would just be a drop in the bucket.

This article about a commercially available power assist system that looks pretty similar to the one in question suggests it works more like short bursts of a very significant videogame-nitro-button effect.

With a simple push of a handlebar-mounted button, the rider can summon up to 200 watts of extra pedaling power, essentially transforming an average cyclist into Chris Froome.

Motors, as anyone with a basic knowledge of physics can tell you, have magnets and big lumps of iron in them. All you need to detect them is a magnet. If you want to be show-offy about it, as the Union Cyclist International apparently does, you can use a magnetometer app in a phone or tablet.

But there’s really no need and especially no need for $1.5million x-ray scanners. If a 50c NIB magnet sticks somewhere on the bike it shouldn’t (which is almost anywhere, there not being much ferromagnetic material on a pro level bike) that’s cause for a closer look.

There are high-end steel bikes being raced though. 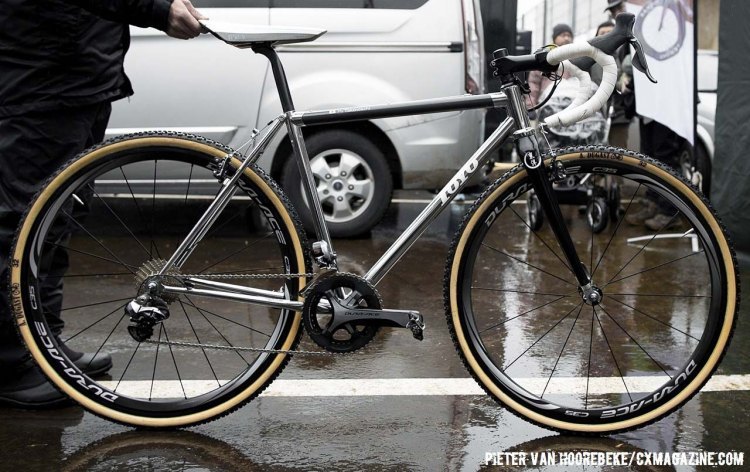 No idea if there’s any steel to be found in this level of pro cyclocross, however.

When it comes to drugs and alcohol - yes, generally.

The open container law is to fight drunk driving. Which I guess I tend to agree with. But there is a difference between you drinking while driving, and a passenger, or an old bottle you threw in the back from camping or something. Of course the law has no guidelines like that and it is left up to the discretion of the officer.

Good to know. In the US we don’t seem to be getting the same level of detail. Evidently it’s more important for our news to confirm long-held conspiracy theories of “tech doping” and to generate outrage.

True, but at elite level steel frames are vanishingly rare, to the point where ‘Hey look a steel frame’ is a reasonable hook for a bike website tech story.

based on the video linked into the article, there is absolutely no way she couldn’t have known the motor was in the bike when she rode it for a lap. i’m inclined to agree especially with a rider of her caliber. Cheaters never like to get caught.

Depending on the battery you choose, you get an extra 200 Watts for 60 or 90 minutes.

No, those are saddlebag batteries, (and not even those output anything like 200 Watts for 60 minutes; the 200 watts is a burst). I would think that for a cycle race we’d be talking about batteries that can be hidden inside the bike frame. Hence I’m estimating about 20-watt-hours.

(Though as you noted, a brief power surge can have tactical advantage that punches above the weight of the energy involved)

This is why the rules don’t require a rider to have been actually caught riding a motorised bike. The bike van den Driessche has been pinged for was found in the pit area manned by her support team. I haven’t seen any suggestion she used it, but that doesn’t matter; the rules clearly make this a ‘strict liability’ offence.

Interesting. That strikes me as a potential win-win there - she admits the mere existence of the bike in the pit is a technical violation of the rules even though unintentional, and thus accepts penalty, without having to concede her innocence of cheating. The rules are observed (win!) and she can forever state that she never cheated (win!), take her punishment, and come back another year.

Well… it’s win-win if she knew about the bike. If she genuinely didn’t know then it’ll be much harder to see any silver lining.

No, that bike has an engine in the video.

explain how it wasn’t meant to be a cheating device,

They could claim that its a battery charger, They might get away with that too.

Cyclocross is huge in some parts of Belgium,