Revolutionary! He’s invented the transponder! Don’t ships and airplanes already have those?

I can see where this is going and fast. In the U.S.the FAA will soon require an N-Number or in this case perhaps a D-Number.

As drones get cheaper, I think it will be harder and harder to enforce this. Sure, you can require every manufacturer and importer to support it. But as long as you’re buying them boxed of the shelf from a teenager at Academy Sporting Goods, you’re never going to get those people to correctly setup and register those drones. Most of them will just have the factory default ID (which, God willing, would be unique, just not tied to a useful address).

To enforce something like a “license plate”, you first need a dealer who wants to keep on the right side of the law as much as he wants to make a sale. Drone dealers would be well within the realm of future possibility, but would also add enough cost that significantly fewer people would by them. (And once you accept that there are dealers and no such thing as a truly cheap drone anymore, that will drive up the price range manufacturers aim at.)

I can see where this is going and fast. In the U.S.the FAA will soon require an N-Number or in this case perhaps a D-Number.

I’m amazed they haven’t already. They really, really want to regulate this space, but it keep falling into arguable gray areas.

Also, after drones reliably start transmitting (and secure sites start monitoring and logging them), I think a lot of drone operators will be disappointed to find just how little land out there that they actually have any legal right to fly over.

I bet they’ll enjoy the immediate drop in sales when they put that in the product.

I could imagine in the future they might require someone to register the drone at purchase. If the drone is a gift they can transfer the drone license to the new owner.

I could imagine in the future they might require someone to register the drone at purchase.

How does that work (get enforced) when I buy, say, this drone in a box from Hong Kong? 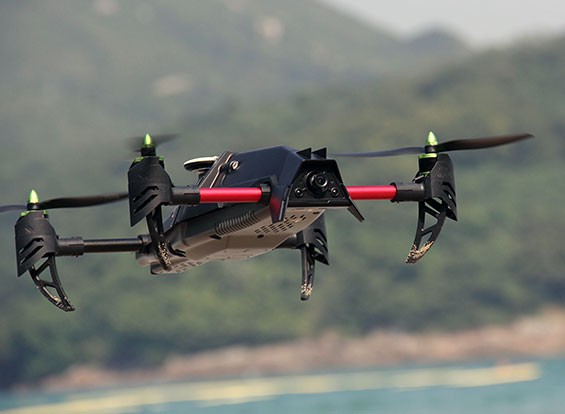 or, from the same supplier, a box of parts from which I build my own (which I have done plenty of times)?

I mean, “drones” are basically three or more speed controllers, three or more motors and props, a small computer to drive them, a radio receiver, and a battery. You can make them out of cheap parts. All DJI has going for it is that they sell a nice seamless all in one package.

I think this is going to end up being something like ‘possessing a drone which doesn’t have a registered transponder attached to it is a criminal offense’ so rolling your own is fine as long as one of the parts you remembered to order was a transponder. But it’ll only be ‘enforced’ in the sense that possessing unregistered weapons is enforced - ie as another charge that gets added to the end of the list when you’re busted doing something else stupid, or as a justification for getting a warrant (“your honor, we believe based on posts on boingboing that this person of interest possesses unregistered drones and we really need a warrant to go rummage around their house”)

You do bring up good points, i can’t say what would be an efficient way of doing it. At the end it may end up being a bunch of compromises that may end up sucking, though i do think something is needed.

“Put out an APB on Mr DEFAULT!”

In Canada, they recently took their suggestions, billed as guidelines and promoted them to law. sigh Some of their rules are almost contradictory, so not being charged for something will depend on law enforcement and courts being reasonable in their interpretation. Great…

though i do think something is needed.

It is solving a non-problem with a non-solution.

Basically drone owners sometimes just do stupid things - either out of maliciousness or ignorance. There needs to be a way to figure out who’s drone it is when it happens.

Take a look at the news story I linked to below. Some idiot flies their drone into the Space Needle, right where a fireworks crew was setting up. AFAIK whoever did it never came forward to get it back, despite the high value. They knew they were in trouble and knew they weren’t supposed to be doing it.

All that said, it’s still going to be a voluntary thing in some respects that DJI is proposing, just like it is now. I’m guessing the above drone owner hadn’t registered with the FAA as one of the rules is identifying info on the drone I believe. Plus, there’s a big underground of basically “open source” drone makers doing things with 3D printers and Arduinos that you’ll never be able to force compliance on.

I know when I’m going to do something stupid with my drone, I’ll use the one that’s registered with an ID # displayed on it or a transponder…

Plus, there’s a big underground of basically “open source” drone makers doing things with 3D printers and Arduinos that you’ll never be able to force compliance on.

Which is what I alluded to above. You don’t even need a 3D printer, though I have one, to build. You just need a bag of parts from China and there is no effective way to regulate motors and speed controllers being mailed world wide.

How about that non-public database that only authorized individuals will be able to access? You think that’s going to last very long if the database begins to contain any valuable information?

The potential for problems with drones are increasingly resembling those of crappy IoT security. Virtually all of the risks are being externalized by the manufacturers (and users) because… they can, and little regulatory pressure is being felt. So DJI is to be saluted for at least raising the profile of the issue. It’s in their own best interest that some good regulation strategy evolve quickly.

Hegel said it best, “We learn from history that we never learn anything from history.” Absent some thoughtful proactive steps, all will muddle along until “the Incident(s)”. At which point DHS brimstone shall be brought forth and smote all that, with a little foresight and effort, might have been good.

The potential for problems with drones are increasingly resembling those of crappy IoT security.

I think we’re already there!

Popobawa proposing autonomous drones which license themselves with each other, so they aren’t arbitrarily subject to human laws.

Think this is a move from DJI to slur their appalling customers service by bringing something useful up.

Facts I bought a 100 US protection plan from DJI for my Mavic, but I can’t use it, as they make procedures to use their protection-plan a circus you will never survive.

Imagine if BMW asked you to download files from your cars computer and upload it to a servicenter in Munich via a flicky website before they would consider calling your car in for service, BMW would fast be out of service.

But thats exactly how DJI does, you have to upload the drones files to their website, I never succeeded, and they will get you tired with expired passwords, robots sending you here and there and so on.

It couldn’t be worse than Parrot unless they sent a team to your house to break your drone. (Parrot did it though a software upgrade and never acknowledged the widely-reported problem.)