Don't pee on a jellyfish sting, and other venom no-nos

Who are the psychos who don’t get something checked out because they think it’s just a spider bite? If a spider bites me, I’m getting my ass to the hospital.

But how does one know they’ve been bitten by a spider?

Unless we witness it/cause it and the spider isn’t one of the miniscule percentage of dangerous spiders in the world then if there’s an issue then it was almost definitely not a spider.

Spiders are pretty hard to get to waste their venom (they need it to eat), they don’t feed on people, and they don’t spread any diseases. They’re kind of the least dangerous arthropod group on the planet…far less so than true bugs, beetles, centipedes, millipedes, flies, wasps, bees, ants…they’re barely more threatening than lacewings.

It could be bed bugs. * Shudders *

If gets out, I won’t get to pee on anybody!

No worries, there will always be birthers, anti-vaxers, and die-hard Drumpf fans available. Have at!

Okay, the Google Trends stats show obvious peaks every summer (predictably) in search hits for “Brown Recluse,” but the slight peak was eleven years ago, summer of 2005.

However, hits for some version of “venomous/poisonous spider bite” peaked in 2004, then saw a slow increase until fall of 2013. It seems arachnophobia has indeed come back into vogue recently.

“Visit Australia! If we don’t kill you, you’ll leave stronger!”

“Visit Australia! If we don’t kill you, you’ll leave stronger!”

A little dehydration never killed anyone!..

Everyone wants a slice of the spider pie, 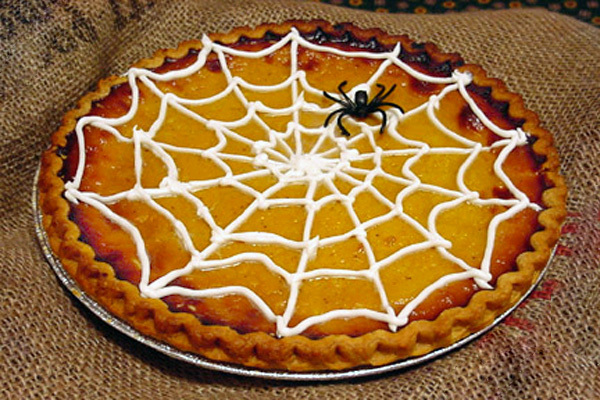 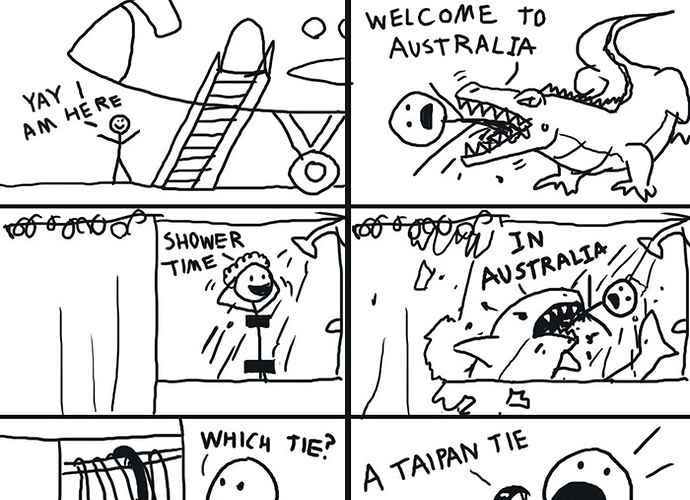 There is one, ONE venomous mammal in the whole world, and where does it live? Fucking Australia, that’s where.

Don’t forget shrews, found right here in North America, and not in Australia, so haha.

Is anyone else familiar with the old farmer solution for snake bites i.e. hitting the site with jumper cables from a running vehicle or a cattle prod to break down the long chain venom molecules? I’ve spoken with old farmers who swear by it and insist they have had their lives saved. Lots of field evidence exists but lab results showed no positive effect. The differences in tests in the field vs in the lab have always bothered me.

Long chain organic molecules of any sort, (I’ve studied ladder toxins a bit in a research setting,) probably wouldn’t be affected by an electric shock to the general area of injection. Snake venom travels systemically within a minute usually, so a localized shock would have no positive effect. If the shock were strong enough, though, it could disrupt uptake of the venom by the nervous system, rather than break down the venom molecules.

Also, sampling bias in anecdotal evidence would favor farmers who survived minor or even dry bites, rather than the individuals who died.

The evidence isn’t just anecdotal, and there is the rub http://www.nytimes.com/1986/08/05/science/the-doctor-s-world-new-shock-therapy-for-snakebites.html?pagewanted=all there are more but you get the idea

It’s an intriguing concept, I’m not disputing that, and there may very well be a strong correlation. Unfortunately, peer-reviewed research is conflicting, and still indicates that the (anecdotal) evidence provided by the mentioned professionals may be incorrect, or imperfect. One notable case was published in the Annals of Emergency Medicine in June of 1991, the treatment of a patient who almost died due to the ineffectiveness of the emergency shock treatment, or a Medline search by The Journal of Wilderness and Environmental Medicine in 2001 which determined “the use of stun guns or other sources of high voltage, low amperage direct current electric shocks to treat venomous bites and stings is not supported by the literature.”

The instructions for the old Cutter snake bite kits, intended for rattlesnake (pit viper) bites, said that the venom travels relatively slowly through the lymphatic system. They included a length of nylon string, described as a lymph constrictor, to be tightened gently above the bite to slow the venom from reaching vital organs. (Note that this was not a tourniquet.) The rest of the kit consisted of three rubber bulbs to be used to apply suction.

Does this approach still have any validity, or has it been debunked as completely as most other remedies? 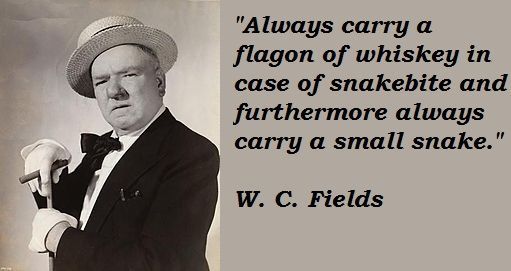 I remember those, I always wanted one when I was a kid, but my parents never obliged.

And I’ll still happily carry a flagon of whiskey in the outdoors. But yes, Dr. Wilcox mentions specifically that venom moves all the way around the body in 60 seconds. Restricting fluid flow in the area of the bite would be unlikely to prevent that movement in time.

Myth #1: Pee on a jellyfish sting to ease the pain.

Dr. Wilcox tested this “urban legend” in her lab and found that this is absolutely not true. In fact, in some cases urine actually made it worse.

Actually, it will make you feel better, if you happen to be someone likes to be peed on.

I have a family member who swears up and down he’s been bitten by brown recluses no less than 6 times. The only confirmable incident was diagnosed by his doctors as an MRSA infection cause by one of several janky tattoos. He now claims the brown recluse some how gave him MRSA.

But how does one know they’ve been bitten by a spider?

Spider bites typically feature 2 visible puncture marks at the center of the swollen/bite area. But IIRC the vast majority of people aren’t allergic to or effected by spider venom. So even should you be bitten by a spider large enough to make it into your skin, you probably wouldn’t notice.

It could be bed bugs.

I’ve had bedbugs. They leave very, very small, welts. Almost always in groups, almost always aligned in straight lines. Its pretty hard to mistake, and in most places with bed bug issues people tend to be aware of that. That said if you misunderstand the above to mean that welts from spider bites always come in pairs (as opposed to be one bite with two visible punctures) you could mistake just two bed bug bites as being from a spider. A friend of mine made that mistake. His bed bug infestation got much worse while he was busy blaming spiders.

Does this approach still have any validity

If I remember my scouting days, and various safety information from camping in places with vipers, no. And it can actually make it a lot worse. They still sell them though. And often enough I run into warnings not to use them. I remember a big ole “these are dangerous bullshit” sign in one particular National Park.

It’s amazing how often a spider will just puncture with one fang or another arthropod will bite/sting twice though.

I’ve had bedbugs. They leave very, very small, welts. Almost always in groups, almost always aligned in straight lines. Its pretty hard to mistake, and in most places with bed bug issues people tend to be aware of that. That said if you misunderstand the above to mean that welts from spider bites always come in pairs (as opposed to be one bite with two visible punctures) you could mistake just two bed bug bites as being from a spider. A friend of mine made that mistake. His bed bug infestation got much worse while he was busy blaming spiders.

That’s what I mean. I just got over a horrible bed bug infestation (Yay insect grade silica gel dust!) but for a time I was blaming everything including spiders.

To be honest, most people don’t really know what a spider bite actually looks like.

Don’t forget shrews, found right here in North America, and not in Australia, so haha.

And a couple of solenedons and the adorable slow loris!