As much as I love poetry about tardigrades and capybaras getting shit-faced together in a little house in space, this poem BOHICAed the Sally-Anne Test.

Can we get a Capybaras tag on this post?

Given that capybaras are the world’s largest rodents (2 ft at the shoulders!!!), I want to read a poem about their enormousness. That would be a delightful AI challenge.

If this is artificial intelligence, then I’ve been doing cutting edge computer science research since I was a child. Although back then we called it “mad libs”.

Don’t get me wrong, I’ve always loved mad libs, but given more recent advances in neural networks and so-called deep learning, I was expecting more from a site named “AI poem”. Calling that AI is stretching the boundaries of artistic license beyond credulity, even for a poet.

The least they could have done was throw in some lousy Markov chains.

I would expect something called AI poem to be able to learn meter and rhyme structure.

If @pentamatron can do it…

My absolute favorite sentence in that article:

Eye tracking of Chimpanzees, Bonobos, and Orangutans suggest that all three anticipate the false beliefs of a subject in a King Kong suit

Personally, I’m inclined to believe that that side-eye betrays a silent communication of “get a load of Don McLeod there,” but regardless I’m just glad somebody funded the wherewithal for that sentence to be composed in the first place.

My birthday = just another day

Clever, recognizing that = is pronounced equals.

I object with a conscience quit a bit.

Only if you pronounce object as in the noun and not the verb.

Glad to believe in #Jesus, He’s the best…
From Fresno to Pomona fuck the rest

“get a load of Don McLeod there,”

“just don’t look at him directly” 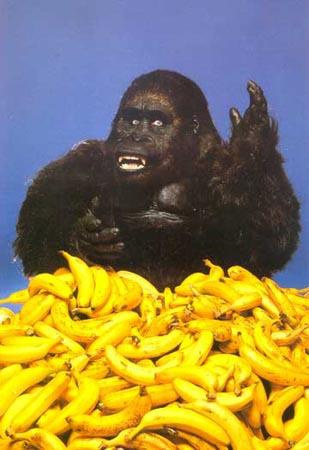 Just look at him.

Yeah, most of the time they’re pretty inane, but sometimes the couplets are sublime.

It seems like there used to be a write-up of how the bot was implemented, but I’m not finding it now. I can’t recall how accurate it was supposed to be, especially with things like your example of the pronunciation of the noun and verb forms of object.

This probably requires a lot of human supervision at first.