It’s very hard to forgive people who don’t apologize, that’s for sure.

Remorse, in the sense of a corporation apologizing, is intellectually the least honest idea ever. Corporations don’t think, nor do they have emotions. Corporate apologies can only be construed as either taking responsibility for actions and outcomes, or denying said responsibility.

Out of all the forms of apology they list, they couldn’t think of the only genuine form: “I’m sorry- If this situation ever comes up again I will handle it differently”.

This is very different from “This will never happen again” which implies even less effort than “We are taking this very seriously”.

I am the only one who thinks that S in sorry looks a lot like Trogdor?

Trogdor does not apologizes, Trogdor Burninates!

this would explain why Canada’s economy is so strong?

I think the article presents a counter-point to this. Apologies are effective as long as they are difficult for the apologizer. Corporations are made of lots of working parts, some of which have powerful influences of the organization as a whole. If a president or a CEO makes a public apology and is personally subjected to the challenges that come with apologizing then they may wish to avoid creating a similar situation again. If they are forced to step down because of the backlash, another person may decide that they don’t want to pay a similar price.

Of course if a CEO comes out and reads a statement written by corporate lawyers then goes back to same-as-usual because they don’t care what anyone thinks of them, that wasn’t actually difficult for them. Corporations give people within corporations a lot of protection, and that includes shielding them from a sense of personal responsibility as well as shielding them from financial impacts. I agree that corporate apologies are often useless in practice, but I don’t think they can be dismissed as useless in theory.

Out of all the forms of apology they list, they couldn’t think of the only genuine form: “I’m sorry- If this situation ever comes up again I will handle it differently”.

I feel like the point of the research was to show an economic function of apologies, where the purpose of an apology is not so much the words that are used or the promise that is implied but actually the “pain” inflicted on the party that is apologizing. I agree that in a perfect world the thing that we would want when someone makes a mistake is that they learn from it and act differently in the future. However, for most people, the best indicator that they will act differently in the future is found in how awful they feel about what happened, not in their rational thought about the matter.

Any apology may be hollow, but if it isn’t, “This will never happen again,” is an indicator that the person cannot stomach the idea of it happening again, which means they will actually try to prevent it from happening again.

Reminds me of The Politics of Redemption that’s worked so well for corrupt and/or miscreant Democrats and Republicans all these years. 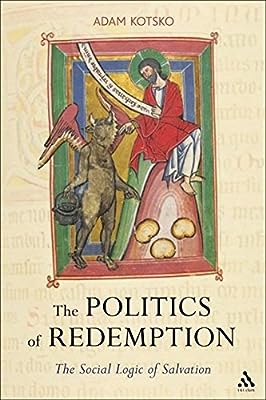 The Politics of Redemption: The Social Logic of Salvation

Recent decades have witnessed an explosion of new perspectives on "atonement theory" the traditional name for reflections on the meaning of Christ's work. These new theologies view Christ as a politic ...

All I care about is whether a corporation takes responsibility for its actions.

I see the point of your overall post and agree. But, that’s an incredibly rare occurrence right there. Partial responsibility, maybe, but not full responsibility.

For every dollar a corporation gives back to society, they usually take twenty times more by profitably thrusting their own hidden externalities upon the rest of society to pay for. For example, the only way to become a billionaire is by leeching off society.

Don’t get me wrong, one can become very successful and still benefit society. But, there’s no way to become a ridiculous, megalomaniacal billionaire without being a societal leech and money hoarder.