Either a brave, or stupid move considering where he is…

I’m kind of scared for him now.

So let’s assume Snowden is an American hero. All these critics are working to undermine him. A hero of the people. That makes them an enemy of the people. Working against us.

Surely the difference here is that in Russia, the reasonable assumption is the Government surveils everything you do as its default position, where as in the US it was kind of a surprising to most of us to learn the NSA had been successfully surveiling literally everything.

Do you think Snowden finds in obnoxious to have to lug his balls around in a wheelbarrow all the time?

Snowden got used. Is there anyone here who seriously thinks you get to ask Putin a question on TV without Putin knowing what the question is going to be and having a plan to get maximum mileage out of the exchange? Now Snowden, who we previously heard is staying out of the limelight because he doesn’t want this to be about him, pens within hours a nice op-ed telling us repeatedly how he risked his life for us but we’re ungrateful bastards?

Oh, and he’s starting a discussion in Russia about something Putin doesn’t want to discuss. Just like Pussy Riot or Anna Politkovskaya. He doesn’t need a wheelbarrow for his balls, he can store them in his empty head. This is almost on par with that time he fled to Hong Kong and said he’s there because of all their freedoms.

My first reaction to this was that he’d been given a classic request he couldn’t refuse. “We’d like you to ask this question on TV. It’s got nothing to do with the expiration of your asylum”. But that’s all a bit ‘lizard people’, isn’t it?

Of course the Kremlin propaganda machine wanted to play Snowden, but in the end all this does is help us all start the debate about mass surveillance in Russia instead of keeping it quiet. This is good for the Russian people and it’s good for society in general.

You’re parroting the corporate media narrative that Snowden is simply naive and couldn’t possibly see how Russia could try to use him in their favor by allowing him to question Putin.

Snowden is actually a very intelligent guy and has managed to keep the largest military-industrial complex the world has ever seen off his ass. I think he can use judgement in weighing the positives and negatives of questioning Putin, and he did.

I also find it pathetic that the western, corporatist media are trying to say this is a softball question:

“Does Russia intercept, store or analyze, in any way, the communications of millions of individuals?”

It was a very specific question that was actually difficult to run around. He specifically mentioned, “intercept, store or analyze, in any way”. That doesn’t offer much wiggle room for dodging. He also said “communications” as to cover everything from phone calls to emails. Once again, very little, if any, wiggle room.

He doesn’t need a wheelbarrow for his balls, he can store them in his empty head.

When you don’t have a good argument, resort to inane insults.

You said it, not me.

There ya go, folks. Letting the TV think for you because it’s too much trouble to do it for yourselves.

Find yourself an actual Russian living in Russia. Ask them if they think Snowden’s question is going to “start a discussion” about mass surveillance.

You’re hilarious. That would be further discussion right there.

What’s your idea of starting the discussion? Saying nothing?

Do you not understand that this was on live television? Wouldn’t it be a little naive to think that wouldn’t start some discussion among those who watched it in Russia? Or do you think only Americans have a monopoly on basic intelligence?

Where are we going to see this discussion, by the way? RT? Pravda? Some of the other free Russian press?

Educate yourself, just as the USA has other alternative media outlets aside from our own corporatist propagandists: i.e., CNN, MSNBC, FOX “News”, etc. - There are adversarial Russian outlets as well:

Many more if you bother to look.

Oh, and you really need to educate yourself on RT: 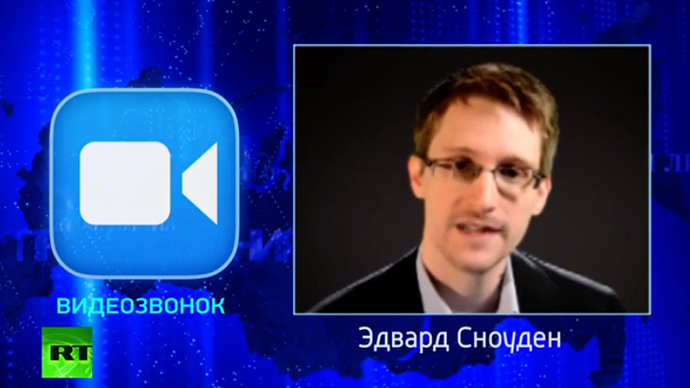 Russia has “no mass surveillance in our country,” according to President Vladimir Putin, after he was asked a surprise question by whistleblower Edward Snowden at his Q&A session, adding “our surveillance activities are strictly controlled by the...

Ask a Russian if they think Snowden made Putin look like a liar or Putin made Snowden look like he works for him.

Well, you have dense Russians and you have intelligent Russians. Depends on which ones you ask.

Today’s question-and-answer session on Russian TV between NSA whistleblower Edward Snowden and Russian President Vladimir Putin did not go as Snowden had hoped.

Oh? It sounds like, as with Senator Wyden, Snowden wanted to get either an evasion or a lie, on the record. He got a bit of both. So if we believe Snowden, then it went exactly as he hoped, and only the Western media’s response to it failed to live up to expectations.

the Western media’s response to it failed to live up to expectations.

Failing to live up to expectations is the western media’s job for its corporatist owners.

It’s up to us Americans to start thinking for our fucking selves beyond what corporate media tells us to think.

The investigative journalist Andrei Soldatov, perhaps the single most prominent critic of Russia’s surveillance apparatus (and someone who has repeatedly criticised me in the past year), described my question as “extremely important for Russia”. It could, he said, “lift a de facto ban on public conversations about state eavesdropping.”

From the linked op-ed.

Oh course you want people talking openly about their dissatisfaction with the state. It makes it easier to round up the malcontents.

PS: This forum needs a “knowing smirk” smiley for my posts. The regular, “only joking” smiley is over doing it.

Dude, even Marcy Wheeler is talking about Snowden being used for this. Is she a corporatist statist TV media propagandist now?

Even if you want to grant that Snowden is being used for this, what is the nature of the damage? How do you imagine this helping Putin? “Putin denied that Russia engages in NSA style surveillance!” is not a particularly surprising thing to have happen. Does the fact that Snowden asked the question make people believe Putin more than if anyone else had? Did Snowden respond to Putin’s answer with something like, “I am happy to hear you say that. Truly I am blessed to have been granted asylum in Russia, a country that now embodies the ideals of freedom America once aspired to but has fallen from”?

We’re likely not the target audience. “I am happy to hear you say that. Truly I am blessed to have been granted asylum in Russia, a country that now embodies the ideals of freedom
America once aspired to but has fallen from” may be how it’s roughly presented by elements of the Russian media.

This makes Russia look like a place where speech and press are freer than in the US. This probably isn’t ACTUALLY the case. So Putin probably benefits from this.

And we’ve seen how these “conversations” go. If Snowden’s revelations in the US only got a milquetoast response from the president and the corporate internet overlords, why would this much softer question cause any real change in Russia?

Low risk, high reward, from Putin’s standpoint. And Snowden’s happy to beat this drum because it’s His Thing now. If there is to be any fallout from this, it will be indirect and distant.