So, basically, this is being put together explicitly as a tax haven.

If I ever found a new country for purely greed-and-ego-driven reasons I’m going to name it “Megalomania.”

I’d be somewhat surprised if that works out for them.
Tax shelters work best when they are conveniently lawless or legally customer-service-oriented; but still respectable enough that you can do business there without throwing up red flags all over the place wherever you actually live and work; and stable enough that the local government isn’t too likely to decide to loot the slush funds on a rainy day(eg. Cyprus suddenly started looking like a much less cozy place to put your dodgy Rubles when it became clear that the bank deposit tax was a serious possibility).

Switzerland has that old-world class, Ireland has that neat combination of hilariously low corporate taxes and EU membership, Britain and its archipelago of sunny former colonies are great places to do stuff that’s too dodgy for even New York or Nevada; but some upstart with zero international recognition, governmental stability likely to be on par with Sealand’s, and a territory that could be knocked over by a vanload of bored Zagreb traffic cops in an afternoon? Not so much.

Everything has to begin in some way. Let’s give it time.
I for one hope it will turn into something stable-ish, if only to troll the “real” governments.

If one was serious about this sort of thing, Antarctica might be the place to go.

If one was serious about this sort of thing, Antarctica might be the place to go.

Why would it be bizarre to offer Mamdarin? Tax sheltered chinese money doesn’t spend?

I think that would be an important base to cover. New, hungry billionnaires living and working in a conflicted communist/capitalist superpower?

One problem with these is that if it works as a tax haven, you’re likely to get invaded and conquered, either by countries who want to stop it, or nefarious groups that want to control it.

And that’s why you need nukes.

[quote=“Nylund, post:9, topic:57632, full:true”]One problem with these is that if it works as a tax haven, you’re likely to get invaded and conquered, either by countries who want to stop it, or nefarious groups that want to control it.[/quote]Why? You don’t really even need a physical presence on the island. You set up legal paperwork electronically, banking electronically, and keep your servers in Switzerland or wherever. People who funnel money to tax havens don’t actually have to ever go there.

I assume the actual people and the actual money will not physically be there to fall to an invasion.

I was going to suggest Freedonia, but someone’s already attempted that one:

The Principality of Freedonia was a micronation based on libertarian principles. It was created as a "hypothetical project" by a group of teenagers in the United States in 1992. The project was formalized as a new country project in 1997, which included attempts in 2001 to lease territory in Somaliland. The attempt to lease land was rejected, and a riot ensued in response to the attempt, in which it is purported that one person died.[citation needed] It was headed by a Texas university student na...

I was going to suggest Freedonia, but someone’s already attempted that one

I never saw a man in evening clothes, except my father when he married my mother.

Why would it be bizarre to offer Mamdarin?

Not to mention being both the commonest spoken language and the language of the average earthling.

… you’re likely to get invaded and conquered either by countries who want to stop it, or nefarious groups that want to control it …

… and keep your servers in Switzerland or wherever …

That works only because that particular piece of land was invaded and conquered by the nefarious Swiss so long ago we forgot why they did it.

Such utter nonsense.
So let’s assume for second that the “founders” of the “nation” did look it up in the right maps, and there really is a plot of land that is neither on the official Croatian nor on the official Slovenian maps.
That meand it’s just not entirely clear which of the former Yugoslav republics the plot belongs to.
The maps in question aren’t the first maps of the area, though. That is a settled area, and I bet land ownership can be traced back at least 150 years. Maybe those files are still paper only, still in German and done according to Austrian law, but I bet they exist.
How does a Polish tourist figure he can claim somebody else’s back yard as a new nation just because there is an error in the official maps?
And don’t forget, that’s an undefended EU interior border; if the owner of the house next to “Enclava” calls the police to Complain about the crazies camping in us back yard, they won’t be overly concerned about the border.

Next, I don’t get the tax haven business… people pay most of their taxes in the countries they live in and do business in - where their bank account is. So how is that even supposed to work?

Worst of all, of course, is this “Kingdom” business. Just proclaiming a new kingdom just doesn’t fit with tradition. An emperor can name a king. A pope can crown an emperor. Or the king can inherit his kingdom. But if you aren’t even of noble blood, you aren’t a king.

I hereby proclaim Privatia, a completely surveilance-free communist people’s republic, in Admiral Michael S. Roberts’ back yard. I also proclaim myself to be its democratically elected dictator. Who’s with me?

Even if people or servers are not there, for it to be a country, you need land. If someone shows up to the empty plot of land and says, “This is now mine,” is there really a country anymore?

Or, to put it another way, can someone make a “country” with no land, that only exists in theory, with servers spread throughout the world? If the answer is no, then you have to protect the land, even if it’s empty and uninhabited. 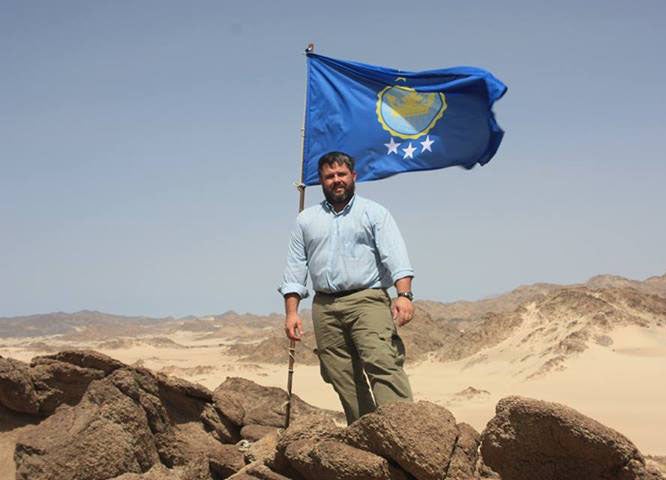 If colonialism had not happened then I would not have existed. The British needed Sudanese civil servants once they pulled out of the country, and my grandfather was one of many selected for their programme. Without this he would not have met my...