Epigenetics could help explain differences between us and Neanderthals

Let me see if I’ve got this right, Maggie: so what you’re saying it that ‘Epigenetics could not help explain differences between us and Neanderthals’…

Methylation […] probably played a role in the difference between human body types and the bodies of Neanderthals. 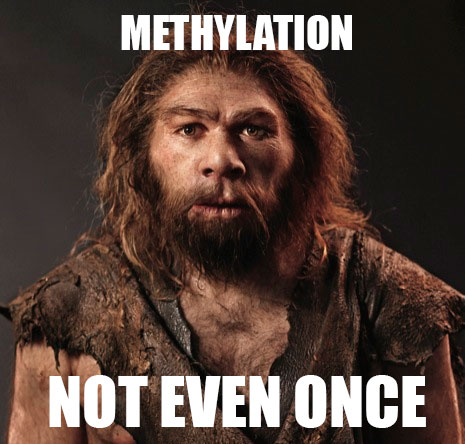 “Methylation — where a chemical compound attaches to DNA and changes the way that DNA is expressed without changing the DNA, itself”

Isn’t methylation just a general term for popping-on a methyl group to an existing molecule?

Yes. But I’m trying to quickly clarify what the hell epigenetics is in a sentence. So there’s that.

He kind of looks like me… the Neanderthal is in the HOUSE! He’s calling from inside the HOUSE! Wait, he’s ordering insurance?

This is really interesting, especially because it was recently found methylation can be inherited, which kind of throws a little Lamarckism back into the mix.

I keep saying Lamarck’s time is nigh.

Meh. This strikes me as a word salad (Methylation! Neanderthals!) of untestable hypothesis.

Dysmorphic body features are pretty common in modern man, but generally these are actual heritable mutations or chromosomal aberrations that might make people sterile. If methylation caused dysmorphism, we’d be studying it. BTW I once saw a teenage girl in a wheelchair who had birth defects, and she had amazing cave man brow ridges.

Probably the real role of methylation is seen in mental illness. Adverse conditions effect the development of the young brain at the level of methylation, and this persists for life and probably into subsequent generations.

Sure, more accurately it should read “DNA methylation”.