I agree with you 100%. These type of “attractions” are no more than another form of fetish. I would not consider them a haunt of any kind.

I didn’t know this was a thing…but judging from the relative success of the torture-porn film genre, this looks like another example of ‘going for the gross out’ for the Extreeeeme set. I’ll pass.

I did go to a real haunted house recently…and it was a decidedly mixed bag. My wife is a big fan of amusement parks, so we took a trip to Universal Studios. That was a pretty decent haunted house; big sets, the whole canon of movie monsters to choose from…and having actors in costume adds a level of surprise reflex that the (mostly animatronic) haunted houses I’ve been to before do not really have.

So, we saved it for the end of the day. There was a group of women ahead of us, well dressed (in retrospect a little too well dressed), in their forties…alright, let’s go. Flailing Chuckie with knife…Nosfaratu rearing up right by my left side (that made me go ‘yipes’)…my wife is saying ‘Hello!’ to all the monsters…we’re having a good time. The women ahead of us…are freaking out. An echo chamber of screaming that gets more and more frantic…the meek docent behind us shoos us forward towards the histrionic trio. Just then another monster jumps out (the wolfman I believe) and one woman shrieks and falls backwards like a felled redwood tree. Designer purse flying, stiletto heels akimbo, head slams at our feet. She just lies there. For like 10 seconds nobody makes a move. Finally my wife and I help her up, get her stuff…and before she can take two steps another monster appears, she flips out again, lunging backwards into us…and planting her stiletto heel directly on the top of my wife’s bare foot. Wife in shocked pain, clueless women continue onwards…docent asks ‘are you ok?’ ‘NO.’ Exit stage left. Get a glimpse of Dr. Frankensteins lab (missing what looked to be the best part)…are led to the infirmary.

Receive friendly care for bloody divot. Are given many ‘cut in line to ride such and such’ passes. Go out and see the three ladies huddled together and give them stare of death; confrontation would have been pointless (they didn’t speak English anyway)…

Wait by entrance and find harried nice mom with two small kids and give her the passes. Limp to car and return to hotel.

These were…adults. But I guess there’s no accounting for maturity…In closing I would like to call for a complete ban on too scary haunted houses, unsafe footwear and human stupidity. Thank you.

Simulated rapes? That’s the first I’ve ever heard of that in a haunted house. Kinda fucked up.

Blackout has done that.

They also had a nude woman pull out a bloody tampon and force you to put it in your mouth.

This article is just so much internet faux-concern hand wringing without much justification beyond the author not personally enjoying the haunted houses.

And if you’re going to work your moral outrage into a lather, better to refrain from tasteless jokes about mass-fatality fires while doing it. “No pun intended” - yeah right.

I’ve never heard of any of this shit… I mean “extreme haunted house” to me sounds more like Sleep No more NYC (never been but want to go). Jack Ass escape room sounds uncomfortablely close in title to the Real escape games (which I haven’t done but will do at the end the month) and I hope are nothing like what he’s described (sure isn’t described anything like that on the website).

I’ll be honest the standard haunted houses are kind of tired and old. You say “extreme haunted house” and my curiosity is piqued, but simulated rape? getting “slimed” and other things similar aren’t remotely interesting either though.

I think I found your problem.

The industry will suffer from any bad PR

Moral outrage nothing. If you go to a haunted house expecting spooky sounds and people jumping out at you, and instead you get cages and simulated rape… that’s like going to see The Shining and being shown a snuff film instead. The article doesn’t argue that the Jackass Escape houses should be banned – just that they’re not haunted houses.

This is about genre conventions, not morality or “outrage”.

Thankfully, our society has progressed to the point where physical abuse is now commercial entertainment. By that lofty standard, my last transatlantic flight was the epitome of fun.

BoingBoing has covered this before: 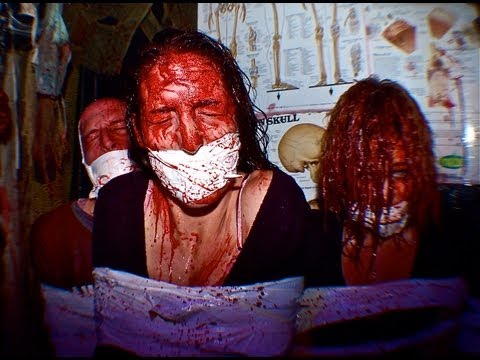 And that’s what this essayist is responding to.

These were…adults. But I guess there’s no accounting for maturity…In closing I would like to call for a complete ban on too scary haunted houses, unsafe footwear and human stupidity. Thank you.

But you signed a release! A release!

I agree with you 100%. These type of “attractions” are no more than another form of fetish. I would not consider them a haunt of any kind.

And I don’t consider “haunts” with bloody dioramas, chainsaw wielding actors and other horror movie tropes to be “haunted” houses at all - and yet those are the mainstay of the “non-extreme” haunt industry. I get that the author doesn’t want to be associated with irresponsible extremists and I think his call for “haunts” to be labeled appropriately is reasonable. But consistency on that issue means that most “haunts” shouldn’t be called haunts at all and should be called something like “Interactive Horror Movie-style Experience” or some such. I’d say that the author’s complaints about truth in naming are a bit hypocritical.

In my admittedly cursory googling of these places, I doubt anyone going is under any illusion about what they’re in for. Some even involve waivers and safe words.

In general, I feel that the typical standard for most haunts is that the customer is a spectator and not a participant. I know there are some that may touch you if you allow it but it’s pretty minimal. These extreme places go way beyond that and are something completely different in my opinion.

I’d say that the author’s complaints about truth in naming are a bit hypocritical.

No, thats just not what this discussion is about. It’s not really about your personal preferences. This is about how things should be labeled within the business, by the practitioners; to keep things well-defined.
You even say it yourself: “those are the mainstay of the “non-extreme” haunt industry”.
So there is no hypocrisy going on here. This is what these things with the bloody dioramas are called today. And the main point, really, is that the amateur fetish dungeons shouldn’t hijack that word to mean something else while there still are customers who really just want to look at a nice horrific blood diorama.

This article is just so much internet faux-concern hand wringing without much justification beyond the author not personally enjoying the haunted houses.

Did you actually read the article? There is zero moral judgment there. The author wants consumers to be clear on the (large) differences between conventional and “extreme” haunted houses, and is worried (with evidence given) that people aren’t running these things safely. She doesn’t call for it to be stopped, and actually encourages people to run them as long as they do it right.

I’d be ready to get outraged if any of this was being done without informed consent, but as it is all I can really say is that being this jaded and numb is its own punishment.

See also: “kidnapping adventures,” in which you pay someone to abduct you and tape you to a chair and etc.

Also, now I’ve got this song running through my head.

Kids these days, with their “music” and their “haunted houses.” Stay off my lawn!

Kinda like how those crazy kids with their eelectric geetars shouldn’t call what they play “music.”