A list of the “best” of something that consists entirely of the most famous, mainstream, established-for-decades examples of the genre? Methinks they and I have different merits for judging quality.

Those are good ones. I’m also minded to believe that the Bone comics should be in that list some where, too.

I guess Nausicaä doesn’t count because… uhm? I also nominate Bone, Amulet, and One Piece.

Because it’s foreign - duh! You think those ignorant foreigners can do anything right? They can’t even speak simple English! /sarcasm

Even if one grudgingly puts up with “fantasy == swords and sorcery,” thereby excluding stuff like Moonshadow and Nausicaä… a friggin D&D comic but no Richard Corben?

Most fucking definitely. To me, Bone is not only one of the best fantasy comics but one of the best comics ever in general. And t.b.h., I prefer the newer dark horse Conan series to the Marvel one.

Moebius is also sorely missing, among many others.

No Cerberus the Aardvark? Not only a good fantasy tale and a funny satire, but also helped change the way comics were produced in America.

I suspect Dave Sim had something to do with that, though any site seeking to make a linkbait article would be missing a trick by excluding him.

Calling it a “fantasy” list and then including “Sandman” is kinda cheating. Either it’s swords and sorcery, like the other nine entries, or you may as well open it up to eg House of Mystery et al.

seriously, groo is the best.

“Best of” lists are always put together at the last minute by a bunch of dudes sitting around the office scrambling for a space filler.
Clearly they’ve never read “Usagi Yojimbo”, or even “Krazy Kat”.

And before Monkey D Luffy, Popeye the Sailor was getting into fistfights with exotic creatures all over the world.

Ha! Still have the first 5 issues of Groo…somewhere.

Ehh, at least they gave Red Sonja and ElfQuest their due.

Hoorah for the Groo shout-out!
I’ve got 100 out of the first 120, and about half the one-offs after that right here still! 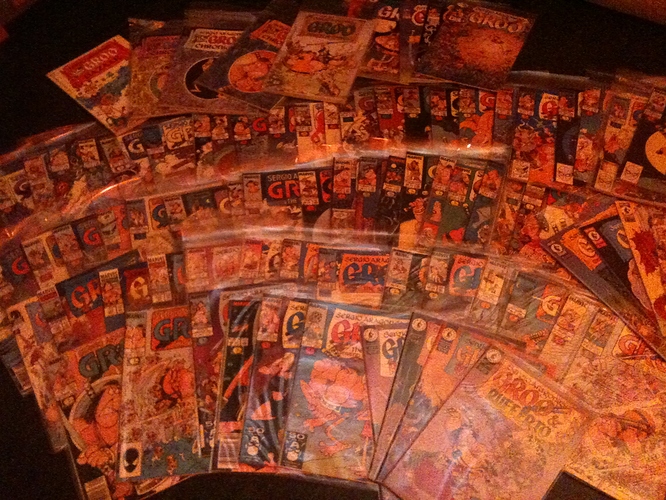 Agree with you partly, but as an older person, what exactly is wrong with established for decades, my young whippersnapper? In my day we had to walk to the comic store in 10 foot high snowdrifts, uphill both ways, to get our Elfquest. And how exactly mainstream do you think it is?

Groo was awesome. I was so bummed when they stopped publishing it and moved my subscription over to Ren and Stimpy.

Nice to see the D&D books in there. I was into D&D and started getting the comics, so it was sort of my gateway drug. Jan Duursema, Ron Randall, and Rags Morales were solid.