The Tombs of Atuan … LOVED that map.

The map of Sanctuary from the Thieves’ World series - that was my jam when I was … fifteen? sixteen?

I love fantasy maps. Used to draw sub-Tolkien ones as a kid.

I’m slowly working my way through Stephen Erikson’s Malazan Book of the Fallen series, which is extremely good although extraordinarily complex. Without maps it’d be impossible to get a handle on it.

The late Douglass Parker, who was a professor of Greek at the University of Texas, had a whole class in the 80s and 90s devoted to fantastical worlds, and maps: Parageography. It’s one of my big regrets that I never took it while I was there, though a friend of mine did. There was usually a semester project of creating your fantasy world.

Seeing that picture, I was salivating even read the headline. I always had a love of city maps - the way each of them was individual, different, showing the character of the people that built it.

The map most I love is the 3rd Edition’s Forgotten Realms, huge, detailed, colourful, and full of useful info. I started using it the day I opened the Forgotten Realms Campaign Setting in 2001 and I’m still using it 13 years later. It has coffee and water stains, a few pencil specks and a few tears; but those are things that only make it more valuable for me, a map is something to use, to fondle, to love, and I love it a LOT…

I also have the 2nd Edition one, even huger, but not nearly as detailed as the 3rd one. But it came with a cool transparent sheet designed to track travel times.

For a very long time, I had Greyhawk on my wall.

I feel that I should take a moment and remind everyone here about the Play Generated Map and Document Archive at plagmada.org…

http://plagmada.org/gallery/main.php?g2_itemId=5523 is a good example.

I got into fantasy RPGs (D&D – happy birthday! – and Tunnels & Trolls) before it was really common for the books to have maps. As a result I really got into drawing my own. This probably led to me writing material for RPGs a few years later. In fact, I generally started an adventure by drawing a bunch of maps and writing the map keys.

I recently got back into writing RPG material, and my style has flip-flopped. I write a huge amount of material, often with just a text editor, and write maps last: 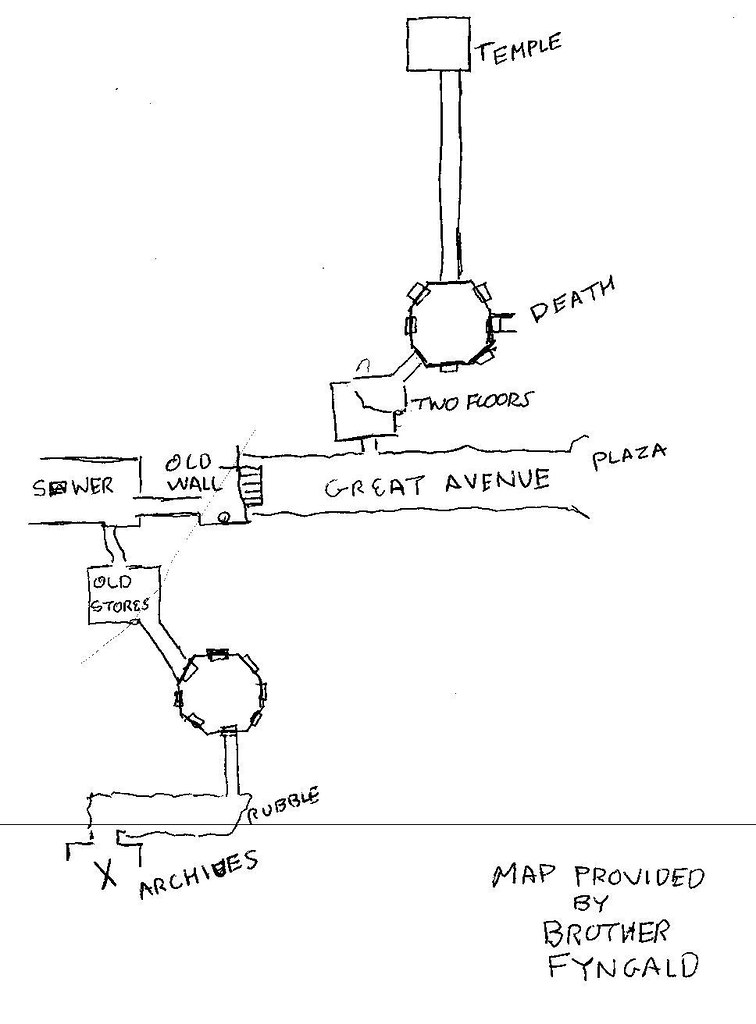 That’s a player-aid map rather than a GM map, so I can afford to be sloppy! Schematics to plot out the rooms in the adventure are more rigorous but not picturesque: 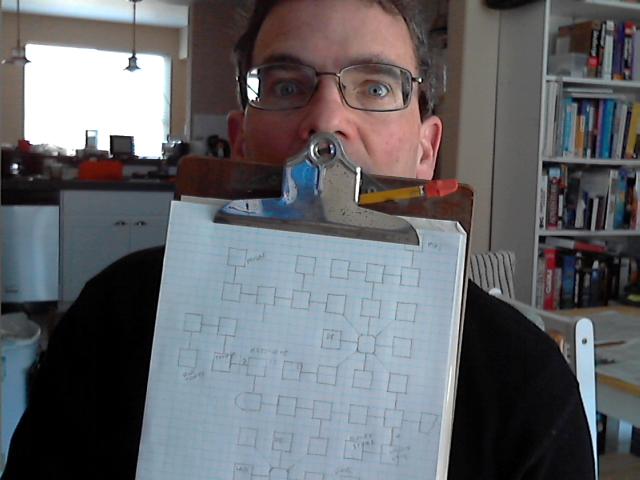 Right now I’m working on two solitaire adventures. They both have appendices for using the settings in GMd adventures. This means creating two city maps, and three or four maps showing the levels of a run-down gladiatorial arena in a forlorn desert city. Hopefully I can make something publishable-quality; I’m planning on self-publishing these and the less art I have to buy, the better!

Oh, I should really post about this here. The original D&D sets recommended buying a copy of Avalon Hill’s “Outdoor Survival” game, because it came with a nice hex map of a wilderness area. The deal was, if your characters became powerful enough, they’d tromp across the outdoors, fighting powerful monsters and eventually getting enough loot and followers to build a castle. Perhaps so you could break out the Chainmail rules and have large military actions.

Here is the map! 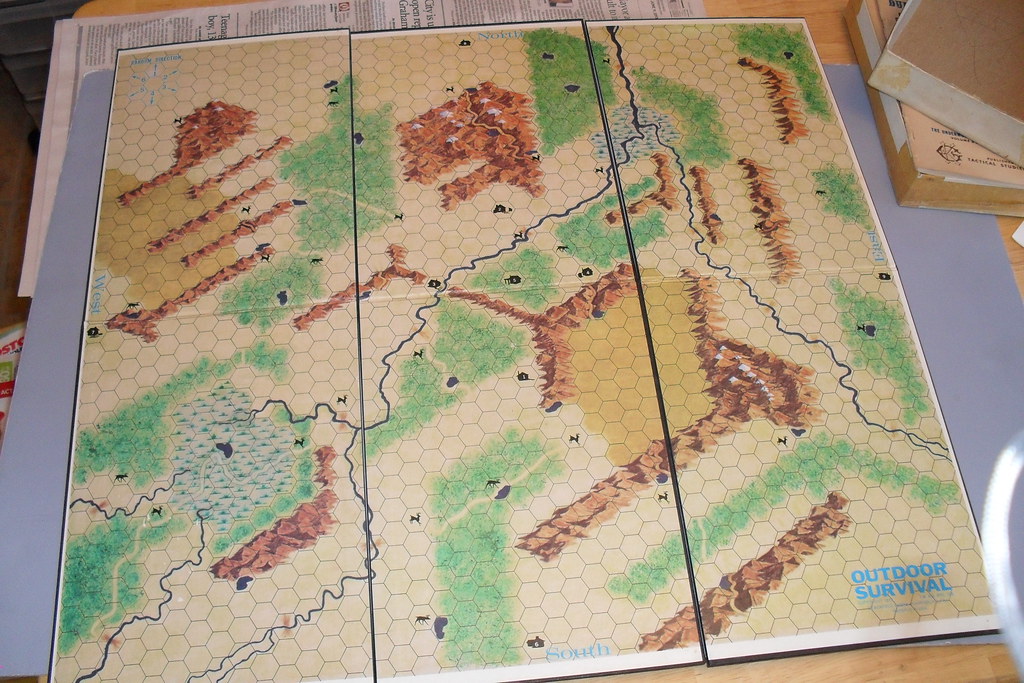 Really generic and bland. Ponds represent castles, and cabins are towns. The Grayhawk and Forbidden Lands maps are so much nicer!

Cory, if you’re reading this, I have a spare map to go with the D&D set that your wife bought you a few years back.

A friend of mine decided to make a map of Silicon Valley in fantasy mode, and is starting to work on other cities. Really beautifully done - I like figuring out how some of the names map back to real names.

I dunno if I’m allowed to croslink to my own rarely updated blog (or if anyone will even read this, I’m posting so late), but on the subject of self made fantasy maps, I’m working on an (android) game which creates it’s own randomly generated fantasy style maps in this style (can’t upload pic? New user? Sure…)

Anyway, check out some pics and techy explanation on my wordpress page to see some pics of what a fully tilable, wrap-around scrolling randomly generated, based on 4D simplex fractal math map generator can do.
I’m still doing tons of work on map generation alone, like getting the mountains to tile nicer and the rivers to generate better, but after/during that I’m working on a fully emergent group of cities inhabited by generated factions with generated people, motivations and social graphs which dynamically generate missions in a plausible way based on your actions and the interactions of the factions/faction leaders.

Which is nice, but: pics of randomly generated fantasy maps which scroll and tile and wrap around like a globe, on your phone!!!