Generate your own random fantasy maps

I’m sure my new invented currency ‘mapcoin’ will take away your feelings of wastefulness when generating a map.

I spent a year in Netsmek one weekend.

That’s just a picture of Wales!

And it’s labeled with a phonetic representation of what Welsh sounds like, to the English!

Shout out to NaNoGenMo, where this originally debuted!

Issue: The Deserts of the West: A travel guide to unknown lands

These are really neat, at least for some types of landforms! Totally stealing some inspiration here for my next map!

Seems similar to Dwarf Fortress’ world generator, which also mimics the natural development of landmasses, bodies of water, and civilizations.

What I’d dearly love to see is a city map generator with a timescale slider to make maps of different eras.

This is amazing, but also really bums me out. I write fantasy RPG material on the side, and spend lots of time imagining and describing the places. I’ve been doing this for thirty five years. But when called upon to map out a territory from an old T&T solo adventure, this is the best I could come up with: 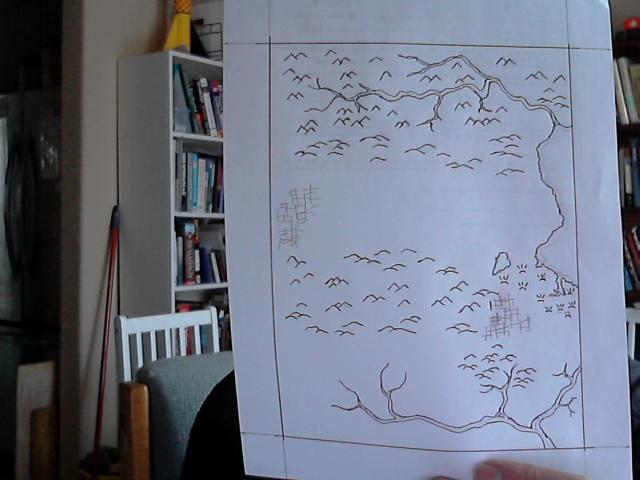 I’ve been procrastinating drawing two maps, of cities. I’m pretty certain there are city map generators out there, and I could likely keep running through iterations until I got something that fit what I had in mind, but it still feels like failure and obsolescence.

I just take maps of existing places and turn them upside-down.

I just make everything up. Boom. (But this seems like fun, too.)