What a photo finish - yesterday both candidates for the presidency in Austria had ~ 50 % of the votes. Only today, after counting the postal votes, it became clear that the FPÖ candidate lost, new Austrian president is a liberal and Europe-friendly independent politician affiliated with the Greens.

This result has three rather important effects:

(@zathras, as our statutory Austrian: how did you experience the election? my own view is from the outside and most likely biased)

We will. I suspect our most likely downfall will come from “Tortoise vs. Hare” type hubris which the Clinton campaign has demonstrated in abundance. Generally though, I think the people who vote for Trump are in a genuine minority. But here’s the other thing: Trump isn’t really a fascist. I think for a while, I assumed he was, because all the signs seemed there. I’ve even had arguments on the BBS that Trump was a duck-talking, duck-walking (or goosestepping) fascist. He’s just an asshole. He might be a racist, but that’s been the Republican party for a long time now. He might be a nativist, but again: That’s the Republican party. This country has been having fascist-like conniptions for a long time now without ever sliding into fascism proper.

Trump isn’t part of any unified fascist movement. If anything Europe alarms me more because the literal fascist parties are gaining power, like the Golden Dawn in Greece. With Trump, you can hardly argue that it’s even veiled fascism, because there’s nothing veiled or subtle about his motivations. It’s simply not fascism in any traditional sense. I think Trump represents a different trend than the rise of right-wing parties in Europe. I think Trump mostly represents the manner in which ethnonationalism has been in conflict with American political ideals for a long time now. Even as we continue to grant ethnonationalism a sort of privileged status as an ideology for other countries beyond our borders.

Also, apropos of nothing, this popped up in my Facebook feed as I typed this: 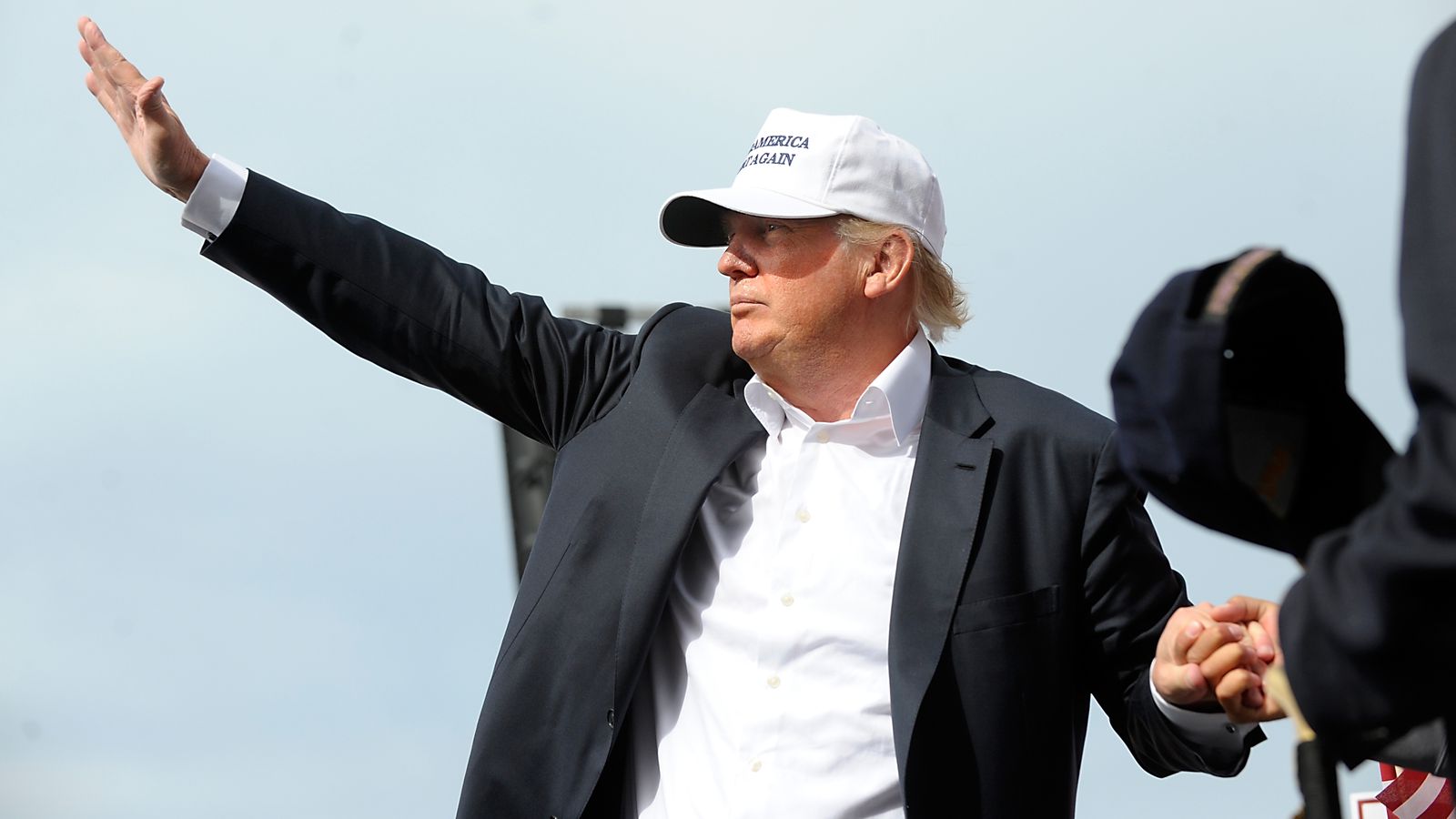 I asked 5 fascism experts whether Donald Trump is a fascist. Here's what they...

The verdict was unanimous.

If anything Europe alarms me more because the literal fascist parties are gaining power, like the Golden Dawn in Greece.

imo the European far-right parties are less facist but nationalistic and reactionary (you’re correct with Golden Dawn, though).

Norbert Hofer (the candidate of the FPÖ) said the platforms of his party and the US democrats are comparable - and I suspect he has a point. Left and right positions are not identical in the US and Europe. e.g. in Europe no serious and successful party is against public healthcare or social security (the far-right position is recognizable by the addition “for native citizens”).

Generally though, I think the people who vote for Trump are in a genuine minority.

in the name of the Invisible Pink Unicorn, I hope you’re right

Twitter got me atwitter about the potential for the FPO to win, so I’m relieved that’s not the case. I do wonder how long the EU will last, given Russia and other doing their best from the outside, and the right-wingers from the inside, to tear the whole thing apart. I wonder: Is there a significant split in support for the EU given one’s experiential proximity to WWII?

As for the U.S., I think between Bundy Ranch militia escapades and trump’s circus run for POTUS, the American public clearly hasn’t given itself over to the lunatic fringe…yet.

Hopefully we can be relieved that it’s still appropriate.

The conflicts are as old as the Rome treaty, but the current problems (financial crisis, refugee influx, Brexit, Ukraine) revealed them like a potato reveals the innards of a watermelon.

I am still cautious optimistic. With luck not only wishful thinking.

Norbert Hofer (the candidate of the FPÖ) said the platforms of his party and the US democrats are comparable - and I suspect he has a point. Left and right positions are not identical in the US and Europe. e.g. in Europe no serious and successful party is against public healthcare or social security (the far-right position is recognizable by the addition “for native citizens”).

While the rest of the Republican party still wants to gut social security and healthcare, Trump said he would not touch Social Security and was even for single payer healthcare (and may still be).

I admit, I’ve used the term ‘fascism’ a bit loosely these days even though I know better. The contemporary Republican Party views the U.S. Constitution with a strain of originalism too fundamentalist even for the late Antonin Scalia. (I’m beginning to wonder how many among their electorate even know that it can be amended.) A possibly-maybe President Trump would have to exert his power within these ideological constraints or risk swift denunciation and mass protest (if not outright defection) from Republicans at all levels of government.

Should that defection reach critical mass, I think we’d see a fracturing of the Republican party, thus opening the possibility of a viable, true multi-party system for the first time in U.S. history since pretty much its first few decades of existence. The pragmatic, corporatist faction of the Republican party would finally get its wish of shedding all most of the kooks, xenophobes, racists, and those whose idea of political participation most closely resembles the Two-Minute Hate. (The bad news is that the pragmatic, corporatist factions of both parties might well decide to do a political merger, calling their new conglomerate the Liberty party because f—k you.)

However, given the cognitive contortions Republicans have had to go through to muster so much as compliment of Trump’s necktie, it’s also plausible that they would do none of that and instead fall in line based on some kind of palm-through-forehead originalist interpretation of their country’s federal constitution. It wouldn’t be fascism–quite frankly, I don’t think the Republicans are competent enough to pull it off—but it would definitely worsen an already fatally flawed political culture.

The more that I read the comments on BBS, the more I lean towards voting for Trump.

You enjoy sticking your tongue up a celebrity boss’s behind? You’re not alone. The Duck Dynasty audience will give The Rump his 47 percent.

Aaaaand part two, the FPÖ is a sore loser - they believe the postal votes were counted incorrectly.

In an article the FPÖ politician Herbert Kickl is quoted with

Accomplices of the current political system could potentially use the opportunity to adjust the result in favour of the system’s representative, Alexander Van der Bellen.

I love this. Dubious and cloudy accusations, but The System is to blame.

I nearly missed the general elections on Sunday in Cyprus - ELAM, the Cypriot flavour of the Golden Dawn, won for the first time seats in the parliament. Less than 4 % or 2 MPs, but worrying nonetheless.

From the votes, they are wrong.

wrong deity? should I have invoked Mammon?

In Austria? You may be right.

English language source pointed out to me by @daneel:
https://www.theguardian.com/world/2016/jul/01/austrian-presidential-election-result-overturned-and-must-be-held-again-hofer-van-der-bellen1

I am currently of the opinion (it’s only been a few hours, maybe my opinion will change) that the decision to repeat the vote was the right one for the country. The court decision and last week’s public court proceedings made it quite clear that laws were broken (by representatives of all parties involved, including Hofer’s), but with no evil intent. Redoing the vote, even if it should lead to the “wrong” result, is preferable to having 40% of the population feeling disenfranchised and being susceptible to various conspiracy theories.

Our constitutional court actually has an English-language version of their press release which contains a layperson’s summary of their reasoning:
https://www.vfgh.gv.at/cms/vfgh-site/attachments/9/6/5/CH0003/CMS1467363707042/press_release_07-01-16.pdf

This last point is what got misreported as “there will be no exit polls” in the Guardian article. We’re used to getting reliable projections based on the polling stations that close early the second the last polling station closes; in the age of social media, some results have leaked out ahead of time.

In oral remarks, the court president also reiterated that there was no evidence whatsoever for any actual fraud to have occurred.

As for the result of the repetition, I’m cautiously optimistic.

So on balance, this should be winnable by the good guys.

(And, as part of my patriotic duty to make my country look good abroad: The FPÖ is not nearly as bad as Golden Dawn (GR) or Jobbik (HU), and a little better than FN (FR) or AFD (DE). Not quite sure about UKIP yet. The UK Tories are probably slightly preferable to the FPÖ, though).

And the OSCE is preparing an electorial monitoring mission : )

This topic was automatically closed after 270 days. New replies are no longer allowed.