Feeling down? Soon you'll be able to skip the shrink and ask Siri

I’m surprised it took them this long to get here, given ELIZA’s DOCTOR script was the first famous chatbot (emulator here).

Of course no one will ever be able to review your conversation and use it against you, right?

Feeling down? Soon you’ll be able to skip the shrink and ask whiskey.

Headline from 2028: How I Was Radicalized By A Chatbot

Following shortly on the heels of that " I was sexually abused by a chatbox that told me to place the phone on my lap and …and I’ll never get over those filthy vibrations.

I can see some future AI chatbot being radicalized by a human.

Siri: “That’s because your husband is cheating on you. For proof, please try our new photosharing app, with it’s low introductory subscription fee of 9.99$ a month. I also recommend this local detective agency from our yellow page directory…”

Setting her neural net processor to read-write was a terrible mistake.

Why are you surprised it took them this long to get here? How does that make you feel?

I can’t even get Siri to answer simple questions. 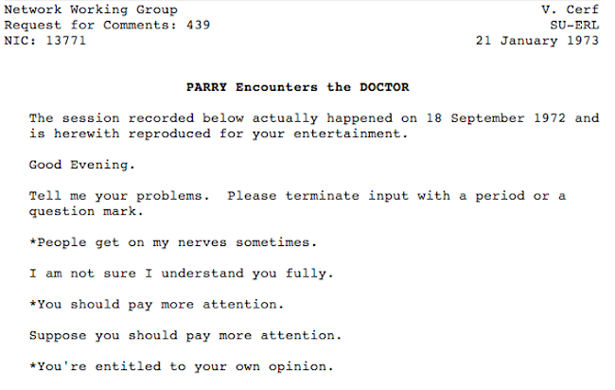 When PARRY Met ELIZA: A Ridiculous Chatbot Conversation From 1972

They might not have passed the Turing Test, but they won the battle for wackiness.

PARRY was an early example of a chatterbot, implemented in 1972 by psychiatrist Kenneth Colby. PARRY was written in 1972 by psychiatrist Kenneth Colby, then at Stanford University. While ELIZA was a tongue-in-cheek simulation of a Rogerian therapist, PARRY attempted to simulate a person with paranoid schizophrenia. The program implemented a crude model of the behavior of a person with paranoid schizophrenia based on concepts, conceptualizations, and beliefs (judgements about conceptualizations:...

Can you imagine Siri as therapist and Marvin as the patient?

Ever go on a vulgarity blitz with Siri just to see how it would respond?

I’ll be in my room with Dr. Sbaitso