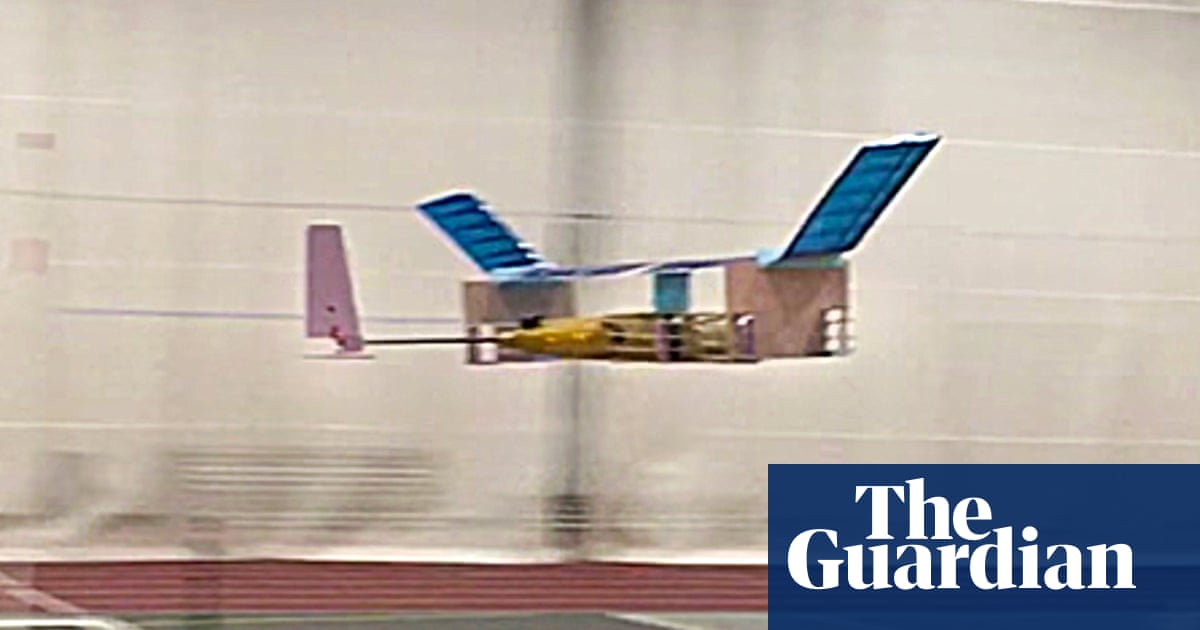 There has to be at least some moving parts - things like controls and control surfaces, landing gear, etc.

I’d wonder about the pollution potential of all that ionized gas, though. Ozone? Nitrogen oxides? Other nasties? Would it be any worse or better than traditional propulsion?

So this is referred to as the Biefeld Brown Effect, and you can build a “lifter” yourself (if you have a very high voltage power supply) yourself to test it out. I got very into this subject during one of my deeper forays into black project aircraft technology.

The Biefeld–Brown effect is an electrical phenomenon that produces an ionic wind that transfers its momentum to surrounding neutral particles. It describes a force observed on an asymmetric capacitor when high voltage is applied to the capacitor's electrodes. Once suitably charged up to high DC potentials, a thrust from the negative terminal to the positive terminal is generated. The effect was named by inventor Thomas Townsend Brown who claimed that he did a series of experiments with pro The u...

Fun fact, there is some evidence that the B-2 stealth bomber uses this principle to enhance flight characteristics beyond what would be possible with traditional aerodynamics.

There has to be at least some moving parts - things like controls and control surfaces, landing gear, etc.

For a flyable prototype, yes. I don’t think the article’s small-scale proof-of-concept vehicle had any need for control surfaces, etc. Just getting the thing off the ground and in flight would have been enough for the demonstration and to heck with control-ability.

Perhaps some future BBE-propelled aircraft could actually achieve controlled flight by employing not one but several electrode arrays with each array operated individually for different thrust levels (although fly-ability would be limited). That said, I doubt the goal is to have absolutely no moving parts in an aircraft, but to create a new way of creating forward thrust for aircraft.

That said, I doubt the goal is to have absolutely no moving parts in an aircraft, but to create a new way of creating forward thrust for aircraft.

It is weird to me that more testing around using the effect for forward thrust hasn’t been done at this point. Any “lifter” video will show enticing possibilities for using ionic wind propulsion in such a way!

I hear you. Just the visuals are quite “enticing” to anyone – including me – but the problem is weight, and even if the application does not include passengers and cargo. Lots more research, but perhaps some day…

… in the meantime, back to tending the turkey!

The problem is probably batteries, specifically the weight. I would guess that’s the current limit on range and we’ll need a next generation of batteries before this issue can really be addressed.

You really need a serious power supply to do this at scale. I am halfway convinced certain platforms in the black world achieve this with onboard nuclear reactors similar to those found on submarines. Maybe on a large triangular shaped airship with skin that is a very large capacitor…

These weigh hundreds (thousands?) of tons. How can you ever lift that? A submarine reactor weighs over 2000 tons for comparison, so…

Pebble-bed reactor maybe? They can be quite small.

You can put a nuclear reactor in a plane, but it’s not really that practical.

The Convair NB-36H was an experimental aircraft that carried a nuclear reactor. It was also known as the "Crusader". It was created for the Aircraft Nuclear Propulsion program, or the ANP, to show the feasibility of a nuclear-powered bomber. Its development ended with the cancellation of the ANP program. The Aircraft Nuclear Propulsion (ANP) program, and the preceding Nuclear Energy for the Propulsion of Aircraft (NEPA) project, worked to develop a nuclear propulsion system for aircraft. The Uni...

platforms in the black world

I did not see this connection until your comment.

"The Hunt for Zero Point" by Nick Cook

An editor for the esteemed Jane's Defense Weekly says the U.S. government has been working on Nazi anti-gravity technology in secret for 50 years.

I was trying to remember the name of that book! Yes, that’s the one I think I learned about the Biefeld Brown Effect from. And an interesting read!

So it’s possible, but every time one of those planes crashes you have a nuclear incident comparable to a pretty large dirty bomb. An airborne one at that. Just seems like a terrible idea.

You know we blast spaceships into the sky with nuclear reactors. One of those goes BOOM, not so good! My point being, clearly there are some risks our species is willing to take.

Fun fact, there is some evidence that the B-2 stealth bomber uses this principle to enhance flight characteristics beyond what would be possible with traditional aerodynamics.

Is it just the silence? Isn’t that easily explained by the fact that it’s a big flat surface with the engines built into the top?

I agree about nuclear reactors being able to be made quite light. Apparently the Topaz II that the Soviets launched into space was only 2340 lbs for 115 kW thermal. Still, even for subsonic…

The ionic characteristics of some platforms is ostensibly in order to improve the stealth characteristics and mask the turbine emissions, from what I remember. The kooky idea is, maybe there is also utilization of Biefeld-Brown to enhance the actual flight characteristics — maybe, for instance, better acceleration.

There are risks and there are risks…
Looks like most of the conceivable Really Crazy Nuclear StuffTM was already tested in the 1950ies and 1960ies, followed by Seemed Like A Good Idea At The TimeTM projects in the 1970ies and 1980ies. Looking back I’d say that we were lucky and got off lightly.
Nuclear power has its uses, but a lot of the time the cost-benefit ratio is just abysmal.

As to the warheads - standard procedure since the early 1950ies.
I spent the better part of 1986 guarding tactical nukes and being trained to fight WW3.
The number of nukes in the world today is just a mere fraction of what is was then.

A hang glider doesn’t have moving parts and they already exist.