I only recently heard snippets of the song, and did not recognise it. But then again. Lynyrd Skynyrd is only known to me because stupid DJ’s keep playing “Sweet Home Alabama” or Kid Rock’s “All Summer Long”. The lyrics of both songs repulse me, as I have never, ever liked rednecks. Their casual bigotry makes my skin crawl.

So yeah. Until last year, I thought there wasn’t a real song called “Freebird”, and when I did hear snippets, I still wasn’t sure that this was the song that running gags kept referring to.

This one’s good too: 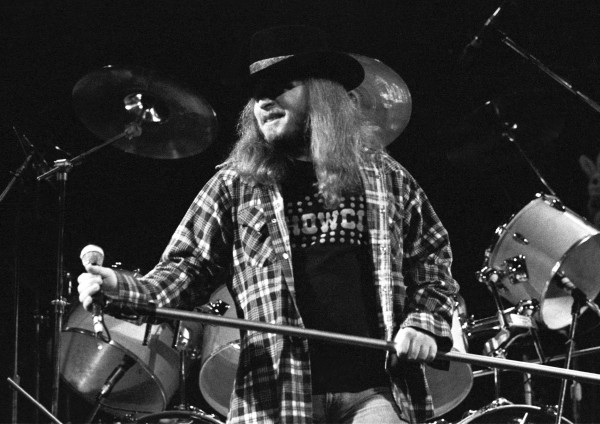 Lynyrd Skynyrd: Inside the Band's Complicated History With the South

Currently on its farewell tour, the venerable Southern-rock group is much different than the one Ronnie Van Zant led in the Seventies

A year ago a ~20 year old cashier at the grocery noticed the t-shirt I was wearing, asked me what a Pink Floyd was.

I went to college at Auburn in Alabama in the late 80s / early 90s. I formed my first band there. We were going for a punk/noise sort of a thing. I was supposed to be the singer, but the drummer didn’t like that I just stood there - so he handed me a guitar. I still can’t play worth a damn. But the first song we learned was “Free Bird” so that when anyone in the audience yelled it out - we would play it. We cleared the room every single time.

i wish i’d never heard skynyrd before, and never had to again.

I kind of want to watch the video because I like seeing minds blown, but I’m pretty sure I’d have to listen to Freebird, so… nah.

When I was a kid (10 ish?) my dad had a turntable and a bunch of Zeppelin and Floyd discs. I asked him why there was a prism on the cover, and he said “It doesn’t matter, just put it on an enjoy”.

I think every kid should have that experience.

despite its ubiquity in classic rock circles, and how tired i am of hearing mention of it at concerts, this really is worth watching and seeing through fresh eyes. it’s true the three-person guitar solo part is incredible. i love his joy, and seeing his mind clearly blown. wait until he hears Stairway to Heaven!

I think even the Rolling Stone article shows that it’s hard to be sure where the original Lynyrd Skynyrd band members stood - and you can’t ask them anymore. And what an artist wants to express and what the audience understands can also diverge massively. I am always amazed when Americans use the chorus of “Born in the USA” as a patriotic hymn, and they obviously only know the title but not to the full lyrics.

When I was a kid (10 ish?) my dad had a turntable and a bunch of Zeppelin and Floyd discs. I asked him why there was a prism on the cover, and he said “It doesn’t matter, just put it on an enjoy”.

I think every kid should have that experience.

My dad told me things didn’t matter, too.

Coincidentally I have just been listening to the first side of Tubular Bells – first time for years – still blissed.

One of my life models unleashed Free Bird for a 20 minute pose, I think I did three or four drawings.

This one’s good too:

As you noted, there is a whole slew of these “first time hearing” videos, and I think this guy’s video of him hearing “Dark Side of the Moon” for the first time was my introduction to the phenomenon. A lot of times these guys are really getting into the song and for someone who’s heard it a million times it’s refreshing to relive the first time through their ears. I love how he squints and shakes his head

I think we’ve got a new textbook example of face melting.

i wish i’d never hear skynyrd before, and never had to again.

We’ll put you down as a “somewhat satisfied.”

And what an artist wants to express and what the audience understands can also diverge massively.

Sweet Home Alabama and Okie From Muskogee go in the same category for me. Incredibly fantastic songs that are Rorschach blots for the audience.

Dude lol, if you liked them then you like the Isley brothers, Ohio players etc Lynyrd Skynyrd was how I was introduced to the names above. It’s all about the sound. So happy to see you enjoying. I love when we can go outside of ourselves, norm, genres and appreciate all music, walks of life. Most music from the 50’s-80’s are expression of , feelings/ enjoyment love of all music. Kept going, their are many great ones to explore in the world, it’s as deep as the ocean. Thank you for sharing.

I love when we can go outside of ourselves, norm, genres and appreciate all music

I grew up with ska/punk. In college I roomed with a guy heavy into rap. The first time he played me Wu-Tang clan, I had to go out and buy the Forever album.

Yeah, the genre really took me by surprise, to be honest. I mean, I think tv-shows like Gogglebox is some of the least interesting things on TV. Watching people watching TV? What’s the point in that?

But, YouTube reaction videos, which really is the exact same thing, has pretty much become my favorite genre over the last few months. I mostly watch trailer reactions, but music reactions are great too.

A couple of the other music reacters I watch are: