In a heart-stabbing betrayal to devoted Pastafarians all across the globe, a school in London has banned the image of their beloved spiritual leader, the Flying Spaghetti Monster.

I am getting heartily sick of the antics of a lot of Universities and Student’s Unions over this issue, including my old one. 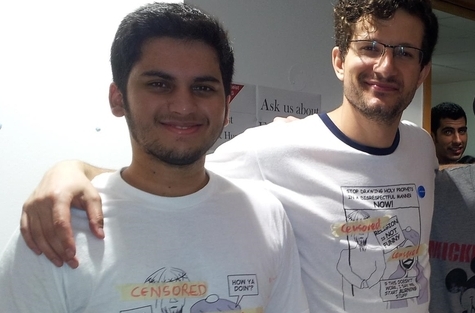 The London School of Economics (LSE) has apologised to two students who were forced to cover up t-shirts featuring pictures from the satirical comic strip Jesus and Mo. Read More »

Which eventually led to this:

and the first example of this bullshit: 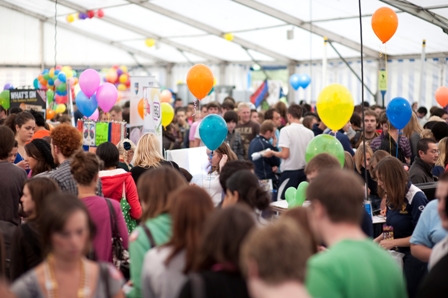 Secularist students kicked out of Freshers’ Fayre for offending Muslims with...

Students from the University of Reading Atheist, Humanist, and Secularist Society (RAHS) were forced to leave the Freshers' Fayre this week after they labelled a pineapple "Mohammed" and put it on their stall. Read More »

I don’t know, that seems a wholly different set of very difficult and problematic questions… how do we balance free expression with respecting others beliefs. I know it’s not popular to point out in atheist/agnostic circles that there is a strain of Islamophobia in western culture, but there absolutely is–mix that with a history of imperialism in places where the majority religion is Islam, and you get a much trickier set of questions.

While I think that criticism of religion in public spaces is a net good esepcially the dominant religion of a country (so Christianity in this case, especially evangelicalism), I also think that doing things like banning burkas and minarets are counter-productive and completely miss the point as to why some people are willing to turn to extreme measures–it’s less about fundamentalism, and more to do with reactions to imperialism (and then we have to account for the work our “allies” the Saudis have been doing to completely colonize the variety of Islamic practice around the world, which our imperialists wars in the past few decades have only helped).

I have no issue with public expressions of faith, as long as it’s not backed by the state, but that’s probably due to being an American… In these cases, you can make that argument, i guess, but it’s not like Islam is the “state religion” in this case. it’s entirely possible that there is a major overreaction on the part of the Union/university that someone might get offended and blow something up… Maybe that sort of thing is only fanning the flames of this issue–probably no one would care, if it didn’t get banned and the fed into the outrage machine.

Interestingly, in the first amendment to the US constitution, both speech and religion are addressed, and I think that says something. You get to both criticize religion, and practice your faith as you see fit–the state meanwhile, will not favor one over others. I think it’s valuable to protect individuals rights to both criticize and worship… I will also point out that despite our recent imperialist activities, I think on average American Muslims feel more welcomed and comfortable here than in Europe right now and are more assimilated, overall (though this is a survey from 2007, so take that as you will):

Report Summary The first-ever, nationwide, random sample survey of Muslim Americans finds them to be largely assimilated, happy with their lives, and moderate

There is also the idea that those who are upset with anti-Muslims expressions are not the vast majority, but the squeaky wheels:

10 Myths About Muslim Immigrants in the West

This is adapted from my book The Myth of the Muslim Tide, now available in paperback in Canada, the United States, Germany and Sweden. A version of this li

I have no issue with public expressions of faith

Nor do I. But you have to allow public expressions of a lack of faith also, and people who want a more secular system should be allowed to call for it. I can respect someone’s right to hold a belief but in any sane system I should be allowed to disagree, including to the point of offending them if I have to, to prove that their esoteric laws on blasphemy don’t apply to non-believers.

Ignoring the one nation under god rubbish, the US gets secularity pretty right. The UK is stuck in the middle ages with an established church, and bishops in the upper house of government. Something which desperately needs changing.

If anything, the universities in these cases are guilty of islamophobia, so scared are they of causing offence to the vocal minority. They’ve completely surrendered the middle ground and are actively stifling debate - which I would think should be anathema to a university.

and people who want a more secular system should be allowed to call for it.

Agreed, as this is what the original article addresses–fears that the organizations media was going to offend the religiously inclined was clearly stepping over the line. It was indeed targeting a particular group.

If anything, the universities in these cases are guilty of islamophobia, so scared are they of causing offence to the vocal minority. They’ve completely surrendered the middle ground and are actively stifling debate - which I would think should be anathema to a university.

As someone who spends a vast amount of time at a university, I concur. Though right now the fight on American campuses tends to be less about religion and more about the drive to corporatize and centralize, which has had similar effects, I think…

According to the Huffington Post, Student Union officials are investigating the incident.

(Really? Do they just have better SU officials in England? At my school, our “student union official” was a guy named Randall who smoked pot all day and stole cupcakes from the commissary. One time, I saw him eat a can of Ravioli cold, right out of the can. Not the investigative type, for sure.)

Yep - Student Unions here are pretty together. They do more than likely also the same stuff, but the people are pretty political.

These people are insane - incurring the wrath of His Noodliness? Crazy.

Also this op-ed from a few days ago…

I pray to Jebus the End of Times be upon us soon so that these people can learn exactly what’s on the menu.

I just want 10 minutes notice so they can apologise for messing with freedom of speech.

I’m actually confused as to why Islamic societies can’t run a gender segregated lecture from time to time, when the UK supports gender segregated schools, especially private sector schools such as Eaton, Winchester for Boys, St. Pauls for Girls, etc.

It seems that gender segregation is perfectly OK for children and when carried out under the auspices of a Christian or well-established organisation, but it’s unconscionable when it’s suggested by practising muslims for the benefit of practising muslims.

If women want to discuss issues around pregnancy and sexual health, and they’re more comfortable doing that without men present, I think universities should realise it’s not automatically an affront to civil liberties to create a space for those discussions to happen in a single gender setting.

Clearly it’d be wrong if every lecture was gender segregated, but that’s not what’s being proposed. It’s showing a lack of judgement to insist that no event could ever choose to invite women or men only, or to invite men to sit on one side of the room, women on the other, without automatically being sexist.

I’d rather trust the intelligence of people running events to act fairly, and have a process to reprimand sexist behaviour if it does occur, rather than lay down inflexible rules on the assumption that without such rules sex discrimination will automatically take place.

It’s not confusing at all as some of us in the UK are opposed to both.

The LBSU have now issued an apology:

This place might be really close to me. I might go and chuck some cooked noodles at their door.

Maybe the Atheist society should merge with the LGBTQ one.

Do they allow the Jedi to continue on?
They are on the census, after all.

This topic was automatically closed after 1102 days. New replies are no longer allowed.