i may not buy a new car again.

one of the primary reasons i do not own a cell phone is that i would be paying to carry a tracking device with me.

maybe this could be part of a James Bond ad-campaign!

I wish my 74 pickup would spy on me more.

my 2001 Moto Guzzi is always complaining that I don’t ride her enough.

Never owned a car. Can’t afford it, don’t want it either to be honest. Living in an inner city as I do, there’s no room to even park the thing, there’s excellent public transport and it ruins the planet. I’ll keep riding my bicycle thanks.

Take Ford CEO Jim Hackett, whose recent Freakonomics Radio appearance celebrated his company’s shift from a car business to a debt-issuance business, with Ford Credit now accounting for a third of the company’s profits.

That’s basically what happened with GM years ago, starting in the 1980s with Roger Smith (of “Roger & Me” fame). Manufacturing quality cars took a backseat to financing the cars’ purchase as the company’s main source of revenue, with GMAC became the company’s focus. In other words, they became a bank (officially in 2008) and as a brand (Ally Bank) in 2010.

This is an interesting twist on that rentier transformation, one that only confirms that any company that brokers data needs to be subject to the same anti-trust and consumer-protection regulation as banks.

Never owned a car. Can’t afford it, don’t want it either to be honest.

I have a driver’s license but I’m a much happier person in many ways because I have the privilege of not having to own a car.

the privilege of not having to own a car

I suppose it’s a privilege in most places. I have to pay something like 100 euro a month just to be able to park the thing without getting a ticket. If I could find a spot at all. Inner city problems.

They still make the Mustang and I doubt that will change. They are also talking about merging with VW which makes a lot of sense. VW makes mostly cars and Ford makes mostly trucks.

I wonder about the folks who run businesses these days. Are they even interested in doing anything other than accumulating other people’s money? I mean, Henry Ford was about building cars, but he was also about providing jobs to his workers that paid well enough that the workers could buy the cars they were building.

How is the blind accumulation of wealth a thing that is celebrated? It sucks for everyone except the person doing the accumulating.

It took me weeks to unsubscribe/disable/disconnect all the bs built into my chevy spark. It’s gross.

edit: Had to literally tear open the rear trim/roof and disconnect the satellite antenna to keep all my driving data from getting sent god knows where. Am I on another list now?

Fnord. They tried to warn us and yet. Here we are.

The thing is, I’m ok with the model of car-as-a-service. I suppose if I had vast tracts of land and garage space (and, to a lesser extent, friendly year-round weather or at least a heated work area for winters), that I’d be inclined to tinker with my car as a hobby.

As it is now, though - I want the new security and driver-assistance features, and better integration with my phone, and better fuel-efficiency (or electrification!) offered by newer vehicles, so almost without exception I’ve leased my vehicles already, and just treat my car as a living expense instead of an asset.

I get that for a large swath of folks, the idea of “owning” stuff is important either because 1) they want to tinker or use things in a way not possible without ownership, 2) they use it as part of their economic model, banking on “paid off” time in their financial calculations (or the reduced cost of the non-financed model), or 3) something else. But for me, the idea of owning something all the way until it starts to have issues is a level of insecurity I don’t personally see the need to deal with.

This assumes, of course, that there isn’t a glaring difference between “cost of ownership for x years + maintenance costs” vs “cost to rent/lease for the same amount of time”.

Umm - bit of a disconnect between headline and post beneath it. (Admission - I did not click through.)
Headline left me expecting a story about Ford monetising car usage data. Story was mostly about car makers making more money from financial business, and trying to make even more money from ‘monetising’ data connected with financial business. Needed more explicit link/exposition of how they might tie together financial AND usage data to justify headline

Since the Escape debuted, I figured the name was really a warning to consumers:

The thing is, I’m ok with the model of car-as-a-service

There’s a substantial difference between the old school ‘as a service’; where you don’t own the thing but the extent of post-transaction data collection extends to checking for mileage over a certain amount and the one that they appear to be contemplating here; where anything that seems even vaguely worth knowing gets phoned home indefinitely.

First time I ever actually felt that the “freak” and in “freak out” for Freakonomics Radio was an accurate word was this past weekend. 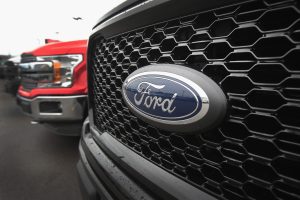 Can an Industrial Giant Become a Tech Darling? (Ep. 357) - Freakonomics

The Ford Motor Company is ditching its legacy sedans, doubling down on trucks, and trying to steer its stock price out of a long skid. But C.E.O. Jim Hackett has even bigger plans: to turn a century-old automaker into the nucleus of a “transportation...

Dammit.
It was horrifying.
And I have not owned nor will ever own, at this rate, a Ford car.